The Jungle Book: Corniest Adaptation of Serious Source Material Ever 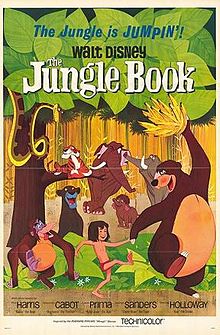 Walt Disney's animation department was getting restless. "The Sword in the Stone" (1963) (which coincidentally turned out to be the last animated film released during Walt Disney's lifetime) had been disappointing. Though it had turned into a mild financial and critical success in its look at the classic legend of King Arthur, which had recently gained public interest due to "Camelot" running on Broadway, that film hadn't enabled the studio to recapture the glory days of "Snow White and the Seven Dwarfs" and "Cinderella." Everybody had loved the still-recent "Sleeping Beauty," but even that film had lost money and sent the studio to its first annual loss in a decade. If this kept up, Walt might decide to scale back the animation department and focus exclusively on that wacky theme park he was planning in the swamps of Florida.


Finally, one of the unofficial leaders of the department, veteran story man Bill Peet, decided enough,  He had joined the staff while it was making "Snow White and the Seven Dwarfs" and knew the animation guys' capabilities. He cornered Walt Disney and just let it rip. He complained that while drawing people was all well and good, live actors simply did it better. Peet suggested instead that they do Rudyard Kipling's "The Jungle Book," claiming "we can do more interesting animal characters." That proved to be perhaps the most insightful comment in the history of animation.


Walt thought about it and agreed; after all, even though they had quarrelled often, most memorably about the dancing/romance scenes in"Sleeping Beauty," Peet was a brilliant writer who had developed both "One Hundred and One Dalmations" and "The Sword in the Stone" practically on his own. He let Peet start work on the story, and, reviewing the ideas later, gradually warmed to the concept. As time went on, he became more and more involved until he basically took the project over himself.


Walt was so excited that he recruited some of the top names in Hollywood to do the voices, and even designed some characters (the vultures) to resemble The Beatles in hopes the group would participate and maybe do a song or two. Unfortunately, the British rockers declined (John Lennon, it turned out, was not a fan) and instead did their own animated film, "Yellow Submarine." Walt shrugged and found a cheaper British rocker to take their place.


One other problem loomed: how to tell the story in an entertaining way. Kipling was beloved and "The Jungle Book" remained popular, but it was not a fairy tale with a happy ending. In fact, it was a dark tale with a bleak outlook on life whose ending was, well, a downer. That may be how life is, but it wasn't the story that Disney wanted to tell. On the positive side, the tale revolved around a boy, Mowgli, but otherwise it was not very "kid-friendly." Walt wanted it be more cuddly, Peet refused, so Peet was out.


At this point, everybody in the studio became a book critic. Walt appointed Larry Clemmons to take over but told him regarding the book, "The first thing I want you to do is not read it." Clemmons did read it, but decided the tale was too disjointed. They then decided to simply make the tale character-driven, moving it further and further away from the source. This led them to add a few sympathetic characters - a girlfriend for Mowgli named Shanti and a "King of the Monkeys" named Louie - to spice things up. Animators were given authority to do entire scenes themselves rather than just individual characters in order to increase the interactions between the characters and give the story a warmer feel.


To make the story even brighter, they made it a musical with fun, cheery songs and even threw in some themes from fan favorites such as "Snow White and the Seven Dwarfs" and "Sleeping Beauty." Several classics emerged, such as Terry Gilkyson's "The Bare Necessities" (nominated for an Academy Award) and tunes by the popular Sherman Borthers (who had done the amazing songs for Disney in "Mary Poppins"). In essence, Walt took the basic grim "Jungle Book" concept and rewrote it himself in a laborious process that wound up making it fun and catchy in the way that he imagined audiences of the mid-20th Century would enjoy.


The rest is history: "The Jungle Book" (1967), released shortly after Walt's death, became one of the studio's biggest hits and foreshadowed the crop of animal-themed animation features of the 21st Century. It is the tale of young orphan Mowgli (Bruce Reitherman, whose father Wolfgang Reitherman directed), who is found by black panther Bagheera (Sebastian Cabot).  Bagheera solicitously takes him to be raised by Adela the Indian Wolf (John Abbott, in a rare casting of a female voice by a man).

When Mowgli comes of age, Bagheera decides that the boy would be safer with his own kind.  Despite Mowgli's protestations that he wants to stay, Bagheera takes him toward the local village. They have various adventures along the way, and Mowgli especially likes Baloo (Phil Harris), a fun-loving bear who promises to take care of him. King Louie (Louis Prima), though, kidnaps Mowgli in the mistaken belief that any human could teach him the secret to making fire. Fortunately, Baloo and Bagheera show up to save Mowgli before Louie finds out that Mowgli, having been raised by wolves, has no idea how to light a fire. Other dangers threaten, too, such as the man-eating Bengal tiger Shere Khan (George Sanders), and Baloo and Bagheera realize more than ever what they must do. When they reach the village, Mowgli refuses to stay, but then he sees the beautiful girl Shanti (Darlene Carr)....


The legacy of "The Jungle Book" lives on. Besides various remakes and video games, characters have appeared in television series ("Jungle Cubs"), in films such as "Aladdin and the King of Thieves," and been used by Greenpeace to raise public awareness about deforestation. As recently as 2003, DisneyToon Studios in Australia released the sequel "The Jungle Book 2," which continues Mowgli's adventures.


If there is one Disney film in the 30-year gap between"Sleeping Beauty" and "The Little Mermaid" that should be in your movie collection, this is it. It was a cultural touchstone of the mid-1960s and one of the bright spots for younger children during that teenager-focused decade. Once you view "The Jungle Book," it will take a long, long time to get Mowgli and "The Bare Necessities" out of your head.


The Diamond Edition of "The Jungle Book," which is in Blu-ray, is available in the UK. It will not be released in the US until February 2014. This edition has HD picture, lossless sound and all sorts of bonus material. Bonus material on the UK Diamond Edition includes:

Here is the trailer for the UK Diamond Edition release:

Below, Phil Harris sings "The Bare Necessities" from "The Jungle Book" as Baloo and Mowgli dance along:

Below is a key scene from "The Jungle Book."