Anna and Elsa Return in a Darker Frozen 2

The long-awaited sequel to the hugely successful animated feature film "Frozen" (2013) finally arrived in November 2019, and audiences flocked to see it. While the story is slightly different and there are new songs to sing on those road trips, essentially the entire Disney team that created "Frozen" returned for the sequel.

As you might expect, the experience of watching "Frozen II" thus is similar to watching the original film. Let's take a close look at "Frozen II" both as an individual film the continuation of a franchise. 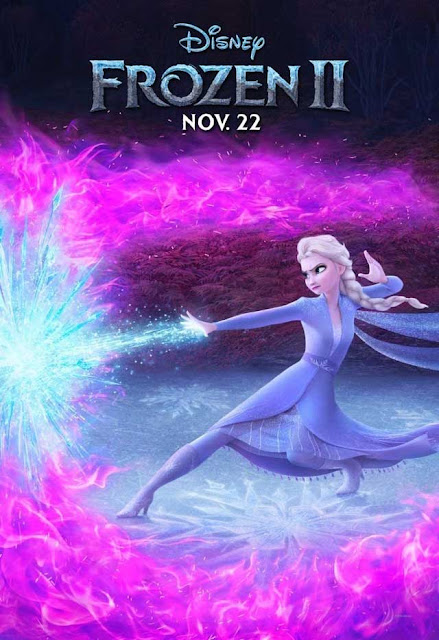 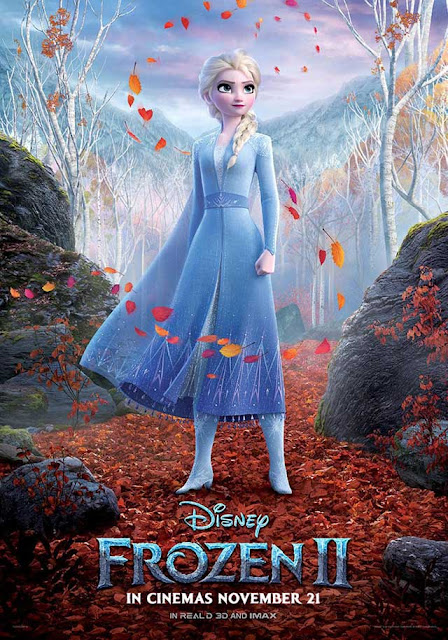 The events of "Frozen II" are set three years after the conclusion of "Frozen." Queen Elsa, Princess Anna, and their travel team of Kristoff, Olaf, and Sven undertake a journey of exploration from their kingdom of Arendelle.

The story begins in flashback style when King Agnarr (Alfred Molina) of Arendelle tells his children Anna (Kristen Bell) and Elsa (Idina Menzel) about their grandfather, King Runeard (Jeremy Sisto). Many years earlier, King Runeard established a treaty with the tribe of Northuldra by building a dam where they lived in the Enchanted Forest.

Unfortunately, King Runeard perishes when a fight occurs, and in response, the basic spirits of the elements of earth, air, fire, and water depart the Enchanted Forest. Runeard's son, Agnarr, somehow escapes from the Enchanted Forest with the help of a mysterious entity, but everyone else is trapped there until the basic elements return.

Returning to the present, Queen Elsa hears a mysterious voice calling out to her. She follows its call and accidentally awakens the spirits of the basic elements which had departed from the Enchanted Forest. This causes problems in Arendelle which must be solved, and Grand Pabbie and the Trolls arrive to advise Elsa on what to do. She learns that the only way to make things right in Arendelle is to undertake a journey to learn Arendelle's past and fix things at that destination.

So, Elsa and Anna rejoin their travel companions from "Frozen" for the journey. These are Olaf the snowman (Josh Gad), Kristoff the ice harvester (Jonathan Groff), and reindeer Sven. Following the mysterious voice, Elsa leads the team to the Enchanted Forest. They find it enshrouded in mist, but Elsa is able to part it.

A tornado attacks, but Elsa uses her magic powers to turn it into ice sculptures. These sculptures are images from Agnarr's past and show that his mysterious savior was their mother, Queen Iduna of Northuldra (Evan Rachel Wood).

Encountering the Northuldra and some lost Arendellian soldiers who are still fighting each other even after all this time, Elsa and her party are attacked next by the fire spirit. Once again, Elsa is able to stop this attack and calm down the spirit, which turns out to be a magic salamander. This leads to a truce between the warring men of Northuldra and Arendelle. At this time, Elsa learns of the existence of a fifth spirit which may solve Arendelle's problems.

Elsa, Anna, and Olaf head north leaving Sven and Kristoff behind. Discovering the wreck of her parents' ship and a map showing a route to Ahtolhallan, a mythical river which is reputed to explain the past, Elsa continues on alone. The water spirit, Nokk, now appears guarding the way to Ahtohallan. Elsa calms him down, too, and continues to the river.

There, Elsa learns that the mysterious voice which initiated their journey was that of her mother, Queen Iduna. She further learns that nature bestowed upon her magic powers due to Iduna's rescue of Agnarr. This makes Elsa the fifth spirit.

Learning more about the past, Elsa discovers that King Runeard only built the dam to hurt Northuldra, which he viewed as a threat due to their use of magic. Runeard himself caused the conflict with Northuldra by killing their leader. Suddenly, Elsa freezes solid due to venturing too far into Ahtohallan, but first, she is able to get a message to Anna. When Elsa freezes, Olaf disappears.

Alerted, Anna realizes that the only way to set things right is to destroy the dam. She finds the enormous earth spirit and manages to draw it to the dam. The earth spirit accidentally destroys the dam, which sends water flowing toward Arendelle. However, destroying the dam frees Elsa, who manages to return to Arendelle and stop the flood.

With the dam broken and the kingdom saved, Elsa and Anna reunite and Olaf returns to life. Kristoff proposes to Anna, who accepts. Elsa decides to abdicate as Queen in order to return to the Enchanted Forest and be its protector. Thus, "Frozen II" ends with Anna as the Queen of Arendelle and Elsa the protector of the Enchanted Forest.

The Impact of Frozen II

"Frozen II" greatly expands upon the "Frozen" universe and gives it context. Elsa's magic powers now have an explanation and both Anna and Elsa have specific roles to play with important purposes to maintain peace. In that sense, "Frozen II" is a fitting companion to "Frozen" and not just a completely new adventure using the same characters. "Frozen II" is a beautiful film with new animation techniques which give the character of Nokki a realistic liquid-like appearance. The storyline is a bit darker, with some subthemes that seem misplaced in a children's film. Overall, as a sequel, "Frozen II" is quite worthy of the original film.

No film is perfect, and that includes "Frozen II." The story is engaging, but not as original as the original "Frozen." The storyline is a bit sketchy, focusing on a "sins of the fathers" theme which is darker than the original film. The screenwriters seem determined to shoehorn in environmental issues that are a bit preachy. Implying that dams are bad is weird and inexplicable, but perhaps that is taken as a given in California where "Frozen II" was produced. Are dams intrinsically bad things that rob people of natural resources? That's an underlying premise that must seem perfectly mainstream to the filmmakers (or perhaps they just want it to be mainstream). Also, blaming the kingdom of Arendelle and its leaders for wreaking havoc on others also raises some potentially intriguing moral questions that are completely glossed over.

The original source material for "Frozen," Hans Christian Anderson's "The Snow Queen," was very dark and not at all the whimsical tales of derring-do that the "Frozen" films became. There are hints that the "Frozen" films are edging back toward that serious quality, and this is reflected in Elsa's grim expression and defiant attitude on billboards and in other advertising. Darkness always has hovered over Disney animated feature films, with witches destroyed, people such as Cinderella treated poorly, and, most famously, the shocking ending of "Bambi." In "Frozen II," good things happen because things are destroyed and powerful creatures are subdued. The lasting consequences of bad choices are portrayed at length, though affixing blame is absent. There is a definite moral subtext to "Frozen II" which keeps trying to burst out from beneath the colorful animation and happy ending.

The "Frozen II" songs are catchy, but there are no breakout hits like "Let It Go." The characters are fun, but they were more fun and original in "Frozen." The absence of a true villain drains "Frozen II" of tension. You have to really care about Anna and Elsa for "Frozen II" to matter to you, and that is unlikely unless you are a fan of "Frozen" to begin with. The bottom line is that "Frozen II" is best seen as a pedestrian continuation film and not one that can stand alone on its own merits as a masterpiece. While this is a typical issue with sequels, "Frozen II" does not really hit new heights of greatness which some sequels manage to do by recalibrating the entire spirit of the franchise. This was the case for "Star Trek II: The Wrath of Khan" and "Godfather II," for instance, but not "Frozen II."

Regardless of quibbles, audiences quickly made "Frozen II" a success. "Frozen II" proved particularly popular with girls and women while also drawing a good crowd of boys and men. It had the highest opening for an animated film of all time and most viewers seemed to like it as much as the original. Based on its opening weekend, "Frozen II" appeared likely to match the box office performance of "Frozen." It quickly set records for the best opening of all time for an animated feature film in France and the United Kingdom, and the best opening for a Disney or Pixar film in China, Japan, Germany, and Spain. There is no question that "Frozen II" is a success and that Disney was wise to make it.

Everyone experiences film differently, which is part of their magic. Personally, to this viewer, "Frozen II" was a bit underwhelming. It did not capture the magic of the original "Frozen," admittedly a groundbreaking film that managed to capture the public's imagination and become a cultural touchstone. Those types of experiences are very rare. I am not in the target demographic, while "Frozen II" is virtually obligatory viewing for tween girls. I can only say that the craftsmanship is there and "Frozen 2" does what it sets out to do: add a new chapter to the continuing saga of Anna and Elsa. And, it does so in a superior but hardly groundbreaking visual style. Anyone who wants more of the same likely will be pleased, but expecting the same kind of exciting experience of the original, which was fresh and new, is likely to lead you only to disappointment.

The creators of "Frozen II" know their intended audience and oriented things with that in mind without taking too many creative chances. There is nothing groundbreaking in "Frozen II." In fact, "Frozen II" is exactly the type of sequel that you would expect when the powers-that-be don't want to tinker with a winning formula. If you saw the original "Frozen," you know exactly what to expect in "Frozen II."

In terms of impact, I place "Frozen II" squarely in the company of "Toy Story 4" and "Ghostbusters II." These types of films simply place the same characters into new adventures as audiences expect. In sum, "Frozen II" is more of the same, which isn't a bad thing in a franchise as warmly received as the world of "Frozen."