The Animators Had Some Fun with "Frozen"

There are all sorts of hidden treats in "Frozen." Let's take a look, one by one. We'll try to give a little background to each, just skip over those parts if they bore you.

There's an old-time Disney character who makes his way into "Frozen" who doesn't appear in a lot of films these days. 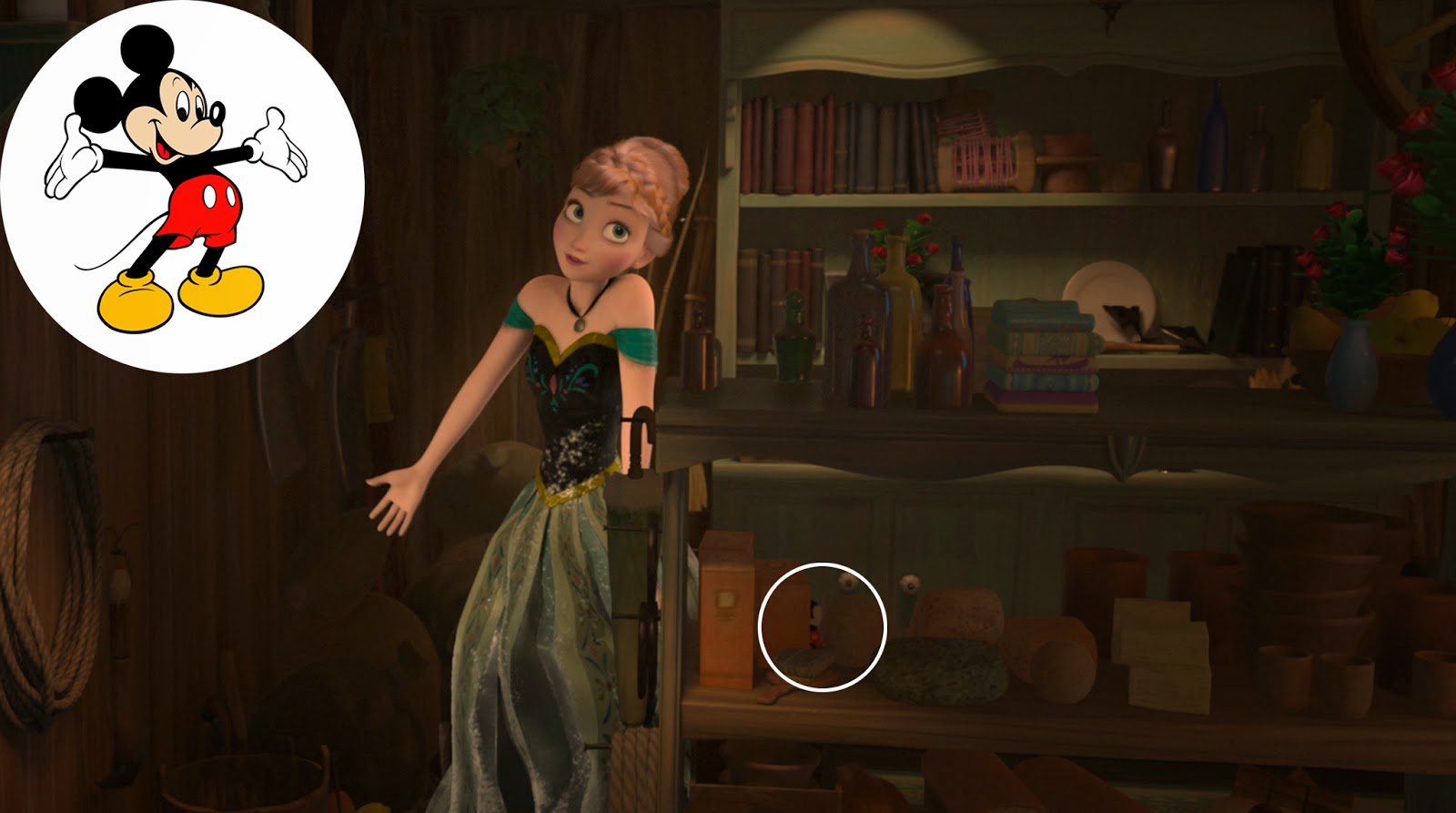 Look closely when Anna (Kristen Bell) ventures into Wandering Oaken's Trading Post and Sauna. If you look very closely, you might spot Mickey Mouse hiding out down there. It is dark and he is hard to see except on a big screen, but Mickey is definitely there.

One of Anna's big numbers is "For the First Time in Forever." As she sings this, she leaps into a swing in a painting. This isn't just any painting, it is the Rococo-era French painting "The Swing" by Jean-Honoré Fragonard. The painting is depicted/copied in the film by Disney background artist Lisa Keene and is far from an exact duplicate, as you can see. Clearly, it wasn't intended to be any kind of duplicate, not least because the original has some, er, mature connotations that don't really fit into a Disney animated feature film. It is what is known as an "homage."

As an aside, Lisa Keene won an Annie Award for her work in "Frozen" in the category "Production Design in an Animated Feature Production," an award which she shared with Michael Giaimo and David Womersley. She is an old hand at Disney, having begun in the animation department working on "The Black Cauldron." She was involved in all the major Disney Renaissance films such as "The Lion King," "The Little Mermaid" and "Beauty and the Beast," and has continued on through the Disney Post-Renaissance and the Disney Revival. She is a background artist who also does character design, and she does a lot of other work at Disney as well.

Anyway, the Fragonard reference is an in-joke. When Disney was making "Tangled," the animators took as their inspiration the Fragonard painting "The Swing" (strangely enough, Lisa Keene isn't credited on "Tangled" at all). "The Swing" provided a certain oil-on-canvas look that gave "Tangled" a classic feel. The free-spirited girl in the swing is what Disney has been shooting for recently in its portrayal of female leads, a carefree, joyous spirit. There probably was the added benefit to Keene using it in "Frozen" that the animation studio already had dissected the Fragonard painting and had plenty of worked-up, unreleased treatments of it for Keen to work with.

"Tangled" also makes an even more direct appearance in "Frozen" elsewhere, but we'll get to that below.

Notice by comparing the animated version to the original painting how, in her version, artist Lisa Keene emphasized the flying shoe (carefree joi de vivre) but dropped the hidden lover (infidelity) in the bushes, and also retained the drone pushing her (commitment). The original painting is about the guy watching in the bushes on the left, a voyeuristic quality that puts him and you the viewer in the same position, both watching the naughty but happy girl. This makes you - the viewer - part of the illicit transaction, with the oblivious gentleman pushing the swing unaware of both the hidden lover and you. Without the guy in the bushes, the painting is just about a free-spirited young girl having fun with her (inconsequential) boyfriend. Its focus shifts completely so that it's all about the princess in a Disney Princess animated film. Very Disney-like changes.

As background, Jean-Honoré Fragonard was a French painter and printmaker who lived from 1732 to 1806 in Paris. The man worked like a madman, painting some 550 quality paintings during the final years of the French Monarchy. "The Swing" is one of his more interesting paintings because it shows a man pushing a lady on a swing while another man, hidden from the guy pushing the lady, is watching the lady fly up into the air. It is pretty clear that the hidden fellow is looking up the lady's dress, but she doesn't care, perhaps because they are having an affair and the first fellow - boyfriend/husband/whatever - is clueless. That may explain why she looks so happy. This kind of ribaldry was frowned upon in serious paintings back in the day, but Fragonard earned a good commission for it anyway. I mean, it's a good painting, and I'm not just saying that because it's old and respected. Fragonard clearly was pushing the limits with "The Swing" during that puritanical age, but Keene managed to tone it back down again.


Eugene and Rapunzel from "Tangled"

According to Chris Buck and Jennifer Lee, that is Eugene and Rapunzel over there on the left, directly in front of Anna. Nothing gets into a Disney animated feature film by accident. Nothing. Becky Breese, the lead animator on Anna, had also worked on "Tangled" and asked the directors for permission to include that homage. The question went up to John Lasseter, and he gave the OK. Good move, John.

Nothing is there by accident.

Below is a reference to another recent Disney classic.

The fairly obvious reference to "Wreck-It Ralph" probably got noticed by a few people, though it wasn't exactly emphasized. People usually don't go into films watching for clues to previous films, but some do because they know there are usually things slipped in by animators on the sly. Some of those easter eggs have been intentional, some have been misinterpreted (clouds forming the word sex?), some have been put in maliciously by disgruntled animators (phallic symbols in ornate castle designs) - but there's usually something. And sometimes Disney just re-uses old material - they were still using work done for "Sleeping Beauty" decades later, and some of the designs for "The Little Mermaid" derived from unused treatments from the 1930s. So, there's usually something there for those with a sharp eye, especially in the "prestige" projects like "Frozen."

Anybody who saw "Wreck-It Ralph" and was looking for insider stuff instantly would have recognized the tasty treats that Anna likes so much.

Below is the introduction of the racers in the "Sugar Rush" game in "Wreck-It Ralph" for comparison.

Now we come to one of the most subtle references you'll ever find in a Disney movie (and actually find out about). There supposedly is a Donny Osmond reference in "Frozen." For real!

During the song "Love Is an Open Door," when Prince Hans proposes to Anna, there is a moment where Prince Hans belts out a high note under a waterfall. As he does so, he closes his eyes and raises his arm in an exact copy of a signature move by Donny.

This isn't a very good way to see it, but it is from this scene:

Now, why would Disney put a reference to Donny Osmond of the famous Osmonds in a film that had absolutely nothing to do with him?

Well, because the animator in charge of that sequence was his nephew.

Hyrum Osmond (now there's a name you don't hear every day) has been at Disney since 2008's "Bolt." On "Frozen," Hyrum was the supervising animator for Olaf, the lovable snowman. However, he stepped in to animate Prince Hans for that one particular moment.

According to Yahoo Movies, Osmond said, "I requested that shot, just because I knew that that was the perfect moment to kind of pepper in that Donny Osmond feel to it."

A couple of things are of particular note about that. First, Hyrum didn't just slip the shot in. This cannot be stressed enough - nothing (at least these days) makes it into a Disney film by accident. That is how tightly controlled the process has become. Second, Donny has a sort of reputation (perhaps from Weird Al Yankovich calling him that once) of being the "white-est guy," and "Frozen" is all about the white stuff. So, it's almost an inside joke of an inside joke, or an inside joke squared.

Hyrum is the son of George Virl Osmond Jr., the eldest of Donny's seven brothers. George isn't very well known because he never sang with the Osmonds due to hearing impairment. He was always around, though, just as much a part of the family as anyone else.


Obviously we were exposed to the 'Donny and Marie' show. We were on set a lot. And me and my brothers and sisters almost playfully mocked our uncles with their signature move, which was basically sort of a tilted head, eyes squinting, with the raising of their arm or arms as they belt out that note. I just thought it was a perfect moment to kind of hit the Donny Osmond pose there.

So take that for what it's worth. It hardly seemed worth asking permission to put in, because, well, you can barely see it even after you are told it is there. But, that is Hyrum's nod to uncle Donny. It pays to be nice to your nephews.

Now, there's one more that isn't that well known. It's not, however, an easter egg, but rather a crazy credit. But it's amusing, and nice to see it and be able to tell your friends about it.

This appears at the very end of the credits and makes fun of standard disclaimers. Hey, you don't see that very often!

So there you go, the animators had their fun, and almost nobody noticed! 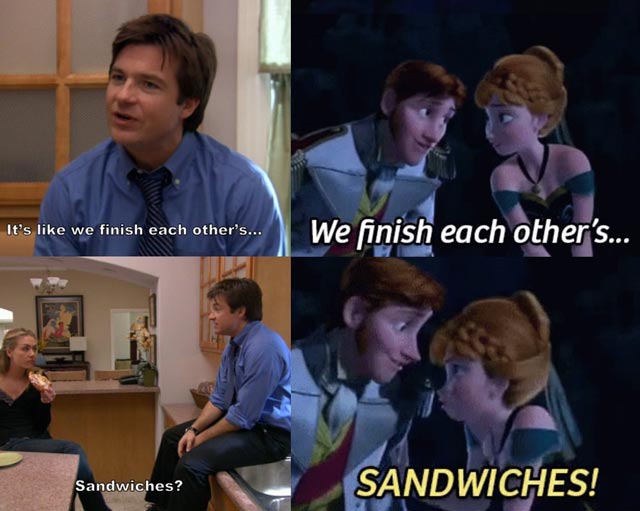 You may find the "Let It Go" sequence from "Frozen" here. It includes a wonderful performance by a 9-year-old singing it - the film version is there at the bottom of the page, animation included. There's a fun lip-synch to "Love is an Open Door" here.

I also have collections of still pictures from "Frozen" as a supplement to my review here and here.