I Know You Love At Least One of These Guys

Everybody loves dinosaurs, and animation is the best place to see them. After all, it's not like you can just go down to the zoo and watch one, "Jurassic Park" notwithstanding. At least, not yet.

So, we offer a list of the best-animated dinosaurs to date for your viewing pleasure, in no particular order because dinosaurs, well, they don't like to be judged. And we don't want to anger any dinosaurs, even the cute and cuddly ones.


Dino from "The Flintstones"

I won't lie, I put Dino first because when I think of animated dinosaurs, he's the first one that pops to mind. Dino is Fred Flintstone's beloved pet from the classic Hanna-Barbera animated television series "The Flintstones" of the 1960s. Of course, it was made in the 1960s, but "The Flintstones" has been in syndication endlessly and has had numerous spinoffs, so it is about as timeless a series as you can get.

Dino, although to be truthful a relatively minor character in the show, is seen in the credits going with the family to the drive-in movie theater, where he has the starring moment when he pokes his head through the roof of the car and obligingly lets little Pebbles and Bam Bam sit on his head to watch the movie. Dino finally got his name in the first season's fourth episode, "No Help Wanted." He is the "modern stone age" version of a pet dog and has a distinctive barking-like sound created - of course - by the fabulous and inimitable Mel Blanc.

Patchi from "Walking With Dinosaurs 3D" 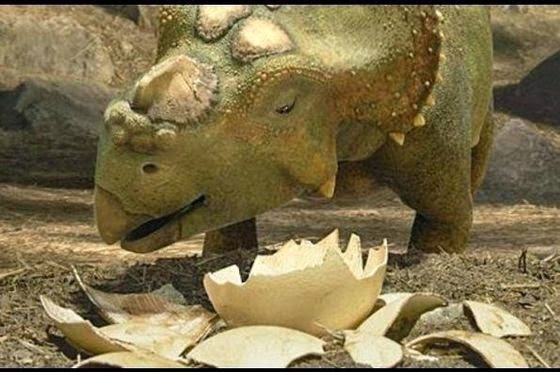 "Walking with Dinosaurs 3D" (2013) is the ultimate immersive experience with dinosaurs. If you aren't interested in a cartoon dinosaur, or a stereotypically dangerous dinosaur, or a dinosaur who is everyone's pal and the only one who knows what's going on - you know, as in every other dinosaur project - then "Walking with Dinosaurs 3D" is for you.

This is a 3D feature spin-off from the acclaimed BBC series with the same name. The plot is simple: Patchi (voiced by Justin Long) grows up during the course of the film and becomes a leader (of course). It is all about coming of age (ugh). So, it has the usual hokey story.

However, that is not the reason to see this film. The true reason to see "Walking with Dinosaurs 3D" is the visuals, which are spectacular. Dino from "The Flintstones" is cute, as are all the other dinosaurs on this list, but they are not cutting edge representations of what we think dinosaurs actually looked like (well, except for the "Jurassic Park" dinosaurs that we'll get to below). Anyway, these dinosaurs are the real deal to the extent that any dinosaurs since their extinction can be the real deal. So, anyone who is truly dinosaur crazy (and only you know who that might be in your circle, but they're more numerous than you would imagine in that 7-12 age range) really would enjoy seeing "Walking with Dinosaurs 3D."

Many forget this creative Disney animated feature film from 2000, but "Dinosaur" was a popular event at the time. The Disney people finally went all-in on CGI and created Aladar the Iguanodon, a young dinosaur displaced by fiery meteor explosions from his home. As with practically every other dinosaur movie ever made that is set in prehistoric times, Aladar and his friends then had to go on a journey to safety (something probably no real dinosaur ever did). Without giving any more of the plot away, this is a family-friendly dinosaur movie where almost everyone is friendly and agreeable, so what do you think the result of their journey is? These are perhaps the most human-like of all the dinosaurs, with personality squabbles and all that, so it depends on how you feel about that as to how you feel about Aladar and friends.


Tiny from "Meet the Robinsons"

Tiny is just pure fun. He appeared in another little-remembered Disney animated feature film from the Post-Renaissance Era, "Meet the Robinsons," a frankly weird time-traveling film. One of the more memorable characters, Tiny, a T Rex, is under the control of bad boy Bowler Hat Guy. Naturally, Tiny also wears a bowler hat through which his master controls him. Tiny appears ineffective at times, failing in very cute fashion to capture star Lewis as he's hiding in a corner, but Tiny asserts his dinosaur prowess and gets even when he causes havoc for the Robinson family by fighting off their family squid (don't ask) and snatching a flying saucer out of the sky.

Few movie franchises equal the success of Pixar's "Toy Story," and only the massive success of "Frozen" finally knocked "Toy Story 3" from its perch as the highest-grossing animated feature film of all time. Like pretty much all the other interesting characters in the "Toy Story" universe, Rex is a toy and a loveable one at that. However, he's also excitable, which contrasts nicely with some of the other more laid-back characters. Rex, who clearly is yet another T Rex, is loyal and fun to watch as he waddles around, but he can get crazy and mean when "it's on" in video games.

Agumon, like everyone else in "Digimon," is purely digital, but otherwise, he's all dinosaur. There are other dinosaurs such as Veemon and Guilmon in "Digimon," but Agumon is the star. He is of course very strong, but he's also sensitive and even acts like a baby sitter - how much more kid-friendly can you get than that?

The plot of "Digimon" involves the characters changing into higher forms, and over time Agumon looks less and less like a dinosaur, which is kind of sad - let a dinosaur be a dinosaur! Agumon ultimately proves his worth as a Digimon by going all the way to the mega level, which is like the coolest level to reach, and ultimately helps create the powerful Omnimon. If none of that makes any sense to you, it's probably because you haven't seen the movie. That's all well and good, but just know that Agumon rules in "Digimon."

No, we're not talking about the Michael Bay films here. Dinobots are transformers, which means they're robots, but so what? If it looks like a dinosaur and walks like a dinosaur and talks like a dinosaur, it may as well be a dinosaur. Grimlock and friends from "Transformers" sort of stay off on their own and Optimus Prime has to go meekly asking them for their assistance when he needs it. They just don't, you know, give a crap. Now, isn't that the coolest thing in "Transformers"? The Dinobots are rough and tough and really what dinosaurs should be, not warm and cuddly like in some of the other presentations in this list which shall remain nameless.

All right, you probably weren't expecting this one, which is why you're going to remember this list! Reptar is yet another T Rex and is brought to the future and subjected to the usual strange rays that turn him into a killing machine. Reptar is hugely popular in the Rugrats universe, and he bears an undeniable resemblance to a baby Godzilla. This guy may seem minor, but many, many kids grew up with "Rugrats" and remember Reptar with fondness.

I know this is a cop-out because it was a live-action film with CGI dinosaurs, and it doesn't really fit with the other purely animated projects listed here.

However, if you are old enough to have attended the very first "Jurassic Park" film back in prehistoric 1993, you will perhaps remember the true shock and awe you felt when Sam Neil and brood go for a walk - and they suddenly see a magnificent brontosaurus calmly eating leaves from a tree (at least that's how I remember it twenty years later). Like, "Whoa Nellie, there be dinosaurs!" That's the kind of thing that anyone who was used to seeing only jerky stop motion dinosaurs from things like "One Million Years B.C." or "Caveman" remembers because they looked so real. The only possible reaction was, "Whoa, dude, how did they do that?" Of course, you missed that moment if you came along later when CGI in films was about as unusual as grass or trees. Naturally, the plot descended from that point into a hokey tale of greedy guy versus noble guy, both pursued by raptors and such, but it was that introduction for many of us to the true power of CGI that made "Jurassic Park" into the phenomenon that lives on to this day, with yet another "Jurassic Park" sequel on the way.


The "We're Back! A Dinosaur's Story" dinosaurs

Now, dinosaurs and musicals just don't go together. I mean, really, that would be like having a dinosaur in an opera, it just doesn't fly. But "We're Back! A Dinosaur's Story!" from 1993 managed to pull off the impossible. If you've seen the movie, you remember that a scientist brings the dinosaurs to present-day New York to please some kids, with predictably unpredictable results (what, you thought they would just do a few tricks and go home peacefully?). However, the dinosaurs (Rex, Woog, Dweeb and Elsa) are likeliest the coolest dinosaurs of them all, a side of dinosaurs that, well, you just won't see anywhere else.

The awesomeness of the dinosaur gang is finally unleashed when a little boy at a parade wistfully says that he wishes he could see real dinosaurs, and Rex and his bloods are only too happy to oblige. They burst into "Roll Back the Rock (To the Dawn of Time)" and bring down the house. Oh, and get this - it was John Goodman's first voice acting role, so it's got that going for it, too. If you were a kid and saw this, you remember.

The "Land Before Time" Dinosaurs

Anyone who is into the umpteen (actually 13 so far, but let me go check the news reports to make sure) "Land Before Time" films has their particular favorite from that dinosaur-laden series, so there's no point in singling any of them out. Now, the "Land Before Time" series has its faults, but adorable dinosaur characters aren't one of them. Don Bluth - the immortal Don Bluth - really hit one out of the park for producers George Lucas and Steven Spielberg. Kids love dinosaurs, and this is the most kid-friendly collection of them ever created. Naturally, there were sequences of dinosaurs going on a journey and so on and forth, which is the story whenever dinosaurs are featured without dominant humans around, but there was also a lot of variety in this series. Littlefoot, Sarah and everyone else makes up a diverse group, and each has a unique personality. While Disney is given credit for the reinvigoration of animation with 1989's "The Little Mermaid," it was really "The Land Before Time" which really got the ball rolling over a year before that.

As of 2015, we have a new installment of the "Jurassic Park" franchise. Naturally, you can't have a film about dinosaurs without having, you know... dinosaurs. So, of course, there are plenty of good shots of dinosaurs in it. Personally, nothing will ever match that shot of the brontosaurus at the beginning of "Jurassic Park" in 1993 for sheer shock value, but these are pretty good and benefit from advances in cgi technology, too. The strange thing is, though, the more realistic you make them, the less, um, novel they seem.

And there you have it, the absolute best dinosaurs from animation history.