It's a Winter Wonderland of Sisterly In-Fighting in Disney's "Frozen"

Walt Disney Animation Studios has been attempting, in conjunction with its brother animation studio Pixar, to update the portrayal of women in animated feature films. While there's nothing wrong with how women have been portrayed, and many would argue there is no need for any kind of change, Disney obviously feels that modern audiences will respond to active heroines who decide their own fates.

The results to date have been encouraging, with "Brave" (2012) winning the Oscar for Best Animated Feature Film. "Frozen" (2013), a musical epic 3D animated fantasy directed by Chris Buck and Jennifer Lee, and written by Jennifer Lee, Chris Buck and Shane Morris, continues that trend.

Once again, audiences approve, critics approve, and Disney has had to back up the mouse-truck to accept all the awards.

Elsa and Anna are two young princesses of Arendelle. They are different in one key aspect, in that Elsa alone has cryokinetic powers (the ability to freeze things using her mind). Their parents want Elsa to have time to learn how to control her powers without injuring Anna (which happened once). Therefore, they live hidden away in their castle, and Elsa remains even further secluded away, alone in her room, far from Anna. In this fashion, the girls grow to adulthood, but Anna does not understand why Elsa avoids her. Anna grows to resent her older sister.

After her parents die during an ocean crossing, Elsa is prepared to receive the crown of Arendelle. The castle gates are opened for the event for the first time in years, and Anna eagerly ventures out into town. There, after some scheming by the Duke of Weselton who wants to exploit Arendelle, she meets and falls in love with Prince Hans of the Southern Isles. After Elsa accepts her crown, Prince Hans proposes to Anna, who accepts. Elsa is upset at this hasty arrangement, and soon a row breaks out between the two sisters during which Elsa reveals her cryokinetic powers.

Elsa is ashamed of herself and runs away. She has no way of knowing that by doing so, she will cause Arendelle to endure endless winter. She decides to build herself an ice palace at the North Mountain, a creation that also happens to bring her childhood snowman, Olaf, to life, though Elsa doesn't realize it.

Anna, meanwhile, sets out alone to find Elsa and bring her back to Arendelle, which would return summer to the kingdom and reconcile the two estranged sisters. Mountain man Kristoff and his reindeer Sven happen along and agree to transport Anna to Elsa's mountain. Along the way, they meet Olaf, who takes them straight to the palace.

The group arrives at the ice palace, and Anna remonstrates with Elsa to accompany her back to Arendelle. Elsa though refuses, and as they argue, Elsa angrily hurts Anna with her cryokinetic powers. In order to avoid further scenes, Elsa creates a giant snow monster, Marshmallow, who chases Anna and the others out of the palace.

Once out of danger, Kristoff notices that Anna's hair has turned white. Consulting the Grand Pabbie of the trolls, they learn that Elsa accidentally froze Anna's heart during their argument. The only cure is for Anna to thaw her heart by performing an act "of true love." Perhaps, Kristoff figures, Anna's beloved Hans will kiss her and free Anna from the ice curse. Accordingly, he returns Anna to Arendelle.

Hans, though, has gone searching for Anna, who had left without a word. He tracks down Elsa and kidnaps her, returning her to Arendelle under lock and key. There, Hans demands that Elsa release Arendelle from its eternal winter, but she pleads ignorance.

Upon the return of Anna, she pleads with Hans to kiss her with true love and unfreeze her heart. He curtly refuses, however, revealing that he never loved her and was using her to gain control of Arendelle. Locking Anna away, Hans assumes control of Arendelle, orders Elsa's execution, and waits for Anna to die from her frozen heart.

Elsa manages to escape into the icy wilderness, while Olaf rescues Anna and reveals that Kristoff is in love with her. Olaf and Anna head out to find Kristoff somewhere in the icy fjord.

Hans finds Elsa and lies to her, telling Elsa that Anna is dead because of Elsa's accidental freezing of her heart. Elsa has an emotional reaction, which causes the blizzard upon the kingdom to lift. This reprieve in the weather enables Anna to find Kristoff in the frozen landscape.

Together, they find that Hans is attempting to kill Elsa, but Anna intervenes, which accidentally freezes her solid but saves Elsa. This turns out to the "act of true love" that lifts the curse from her, and Anna quickly returns to life with her heart unimpaired. Everything is soon put right, with Hans banished, the eternal winter lifted from Arendelle, Anna engaged to Kristoff, and Elsa in control of her powers.

"Frozen" is based on the classic Hans Christian Anderson tale "The Snow Queen." Filming it had been one of Walt Disney's many projects based on classic Anderson fairy tales (such as "The Little Mermaid") which he never got around to completing. The project returned to life many years later, during the "Disney Renaissance" of the 1990s, but then it fell dormant again due to personnel problems.

Veteran Chris Buck, an animator from "The Fox and the Hound" who had graduated to directing successful Disney movies such as "Tarzan," finally brought the "Ice Queen" project back to life. Modern animation techniques made the ambitious project feasible. The final breakthrough was to inject a sisterly rivalry into the story which is completely absent from the original Anderson source material, in which the Ice Queen is evil. Apparently, that was co-director Jennifer Lee's major contribution.

The highlight of "Frozen" is a splendid animation when we get to Elsa's ice palace. Ice and snow is difficult to animate believably because of all the light refractions involved, but the animators carefully studied snowy conditions in Norway, Canada and Montana for inspiration. Producer Peter Del Vecho noted that the idea was to create not "a realistic world - but a believable one."

The dual female leads are done very carefully, and everyone has a unique personality. If there is one overriding reason to watch "Frozen," it is the cutting-edge animation that you won't see anywhere else. People praise the songs, the themes, and everything else, but the animation is what you will remember.

The plot of "Frozen" is effective and in some ways inventive, but it also strains now and then. You have the obligatory cad, Hans, who seems charming at first and then undergoes a transformation. The forced sisterly rivalry between Anna and Elsa is a bit mundane for an epic feature film, with the idea of a sister who is inheriting a throne suddenly choosing to run away in melodramatic fashion on such a flimsy pretext a bit much. Yes, Elsa, flimsy! 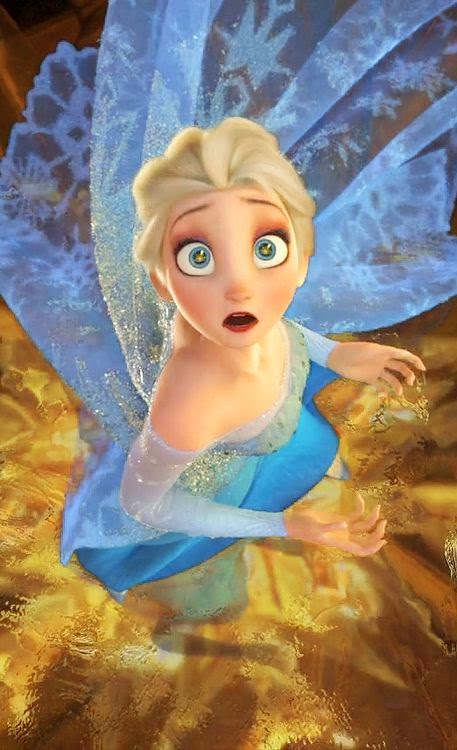 Superior animation tends to have themes that are outside the ordinary, though with human interactions and reactions to which audiences can relate. "Frozen" fits the bill nicely.

Where "Frozen" cuts it a bit thin is in making the sisterly spats into a major cause of the film's plot progression as if a minor spat with your own sister were some magical event. Couldn't Elsa have just, you know, said she was sorry and bought Anna lunch or something? It would have been just as easy for all this to play out as some drawing-room drama, completely within the four walls of the castle. The injection of scenic ice fortresses and kingdoms and epic treks through the snow is necessary for the visuals, but also kind of pointless for the underlying story.

There also is a calculated feel about the portrayal of the characters. One is left with the impression that nobody can be made to look better than the others, that nobody is acting unreasonably or spitefully, and that ultimately the entire film is about a giant misunderstanding. Everyone (with the exception of Hans and one or two other villains, who simply have their own agendas) is so good-hearted that it makes the whole story lose focus. There's no Wicked Queen with that evil edge that people love to hate or anything like that, just people pursuing their assigned roles in life as muddied up by wrong-headed emotions and bone-headed mistakes.


Whereas in, say, "Snow White and the Seven Dwarfs" you have the truly creepy (and wickedly delicious) justice dispensed to the Evil Queen at the end, here you simply have poor Hans sent away, making him more pathetic than evil. Disney has, in a sense, gone soft. Furthermore, that the sisters are princesses is completely unnecessary and feels forced, and there is nothing particularly classic about a plot based upon petty rivalries and exaggerated emotional drama. This could more "believably" have been about ordinary people and their lives. Thus, "Frozen" is just a baby step by Disney into the future from its glorious princess past.

Still, taking all the usual quibbles into account, it is indisputable that "Frozen" has a story to which a broad spectrum of audiences can relate through the usual Disney filter. That is important for widespread acceptance, and a big reason why many see "Frozen" as a return to true Disney-quality animation.

Kristen Bell, who is best known from the television series "Veronica Mars," is the clear star of "Frozen" as Anna. Idina Menzel was brought in from Broadway to take the sister role of Elsa. Bell and Menzel have a duet in the film which is a highlight, with Menzel's trained vocal skills shining bright. Menzel alone delivers a stirring rendition of "Let It Go" at a key moment of the film, a song that is sure to become a classic.


As you would expect from a top Disney animated feature film, the actors are superb and really embrace their roles. Jonathan Groff plays Kristoff, Santino Fontana plays Prince Hans, Alan Tudyk is the Duke of Weselton, and Josh Gad plays Olaf the Snowman. The score was composed by Robert Lopez and his wife, Kristen Anderson-Lopez, Disney veterans who previously composed the score for "Winnie the Pooh." The characters include the usual Disney sidekicks for funny relief and scary monsters that aren't really that dangerous. That is what audiences like, so that is what Disney gives them.

A smash box office hit since its release, "Frozen" is sure to become a beloved Disney classic along the lines of "Tangled" and "The Princess and the Frog." Both Anna and Elsa are so popular with audiences that they will become official Disney Princesses in 2014, and get ready for the inevitable Broadway musical and ice show.

Just about everybody who has seen the film and commented upon it has had a positive reaction, and it will receive a lot of awards. Even if you don't get swept away by the mundane plot, the dazzling animation and usual funny bits, along with the sterling score, should make a visit to Arendelle a fun experience.

Below is the official trailer for "Frozen," and below that the "Elsa" trailer. You also might be interested in "Frozen" hidden treats, our collection of "Frozen" stills, and our first look at the "Frozen" trailer. You also may wish to listen to a couple of different versions of "Let It Go," the film's true show-stopper, here.