"The Little Mermaid" is one of the most treasured stories Disney ever filmed. There are two versions, an animated version released in 1989 and a live-action version that is in production as of this writing. This page is about the original animated version. 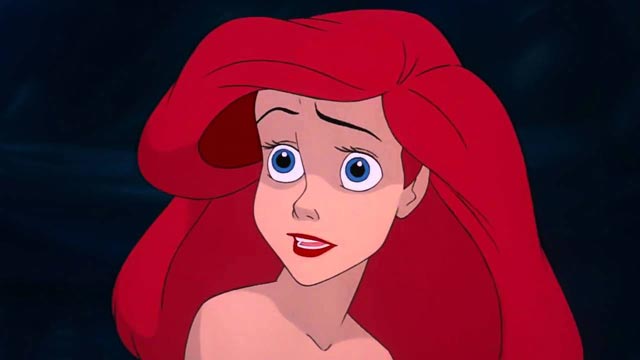 Walt Disney invented feature film animation, and one of his pet projects in the 1930s was an animated feature film featuring Ariel the little mermaid. Just before and then more-so after Walt died, the company turned more in the direction of cute live-action Disney movies for kids such as "The Apple Dumpling Gang (1975)."  This strategy worked brilliantly for the studio at times ("Mary Poppins" (1964) and "The Love Bug" (1968)), and didn't at other times ("The Black Hole" (1979)).

The inescapable bottom line was that live-action comedies and dramas weren't setting the Disney studio apart from the pack. The popularity of Disney movies suffered as a result. Even shifting Disney movies with more mature themes, such as "Dragonslayer" (1981), didn't help. Only Disney movie animation, done the Disney way, could turn things around. This Disney movie, "The Little Mermaid" (1989), directed by Ron Clements and John Musker, features fan-favorite Ariel the little mermaid, who flaps her flipper hard to help set Disney movies back onto the right track.

Disney went back to its roots with "The Little Mermaid" It really was Disney's first pure classic fairy tale since 1959's near-disastrous "Sleeping Beauty." The studio almost made a version of this in the 1930s, but the studio had too many projects going on in the "Snow White" days and "The Little Mermaid" never happened. This Disney movie only happened when the studio refocused on the classic fairy tale by Danish author Hans Christian Andersen fifty years after the first plans for it were laid, when classic, Disney-style animation was experiencing the first, faint stirrings of a revival with "The Land Before Time" and "The Secret of NIMH" and a few other new titles in the '80s. Original treatments that had been made back in the 1930s - the studio's true glory days - inspired and in some cases guided the animators doing "The Little Mermaid," so it really was a continuation of the true Disney legacy.

"The Little Mermaid" doesn't follow the original fairy tale too closely. Hans Christian Anderson wasn't all sweetness and joy, so certain things had to be changed to appeal to a modern audience. Having a heroine like Ariel the little mermaid die at the end may have worked when the fairy tale was written, but it sure wouldn't work today in this "The Little Mermaid."

In this "The Little Mermaid," Ariel the little mermaid (Jodi Benson, who since has gone on to roles in the "Toy Story" franchise besides the two sequels to this film), is the youngest daughter of King Triton (Kenneth Mars). She is dissatisfied with her life in the sea. In a classic case of "the grass is always greener," she longs to live with the humans who walk on land.


As a result, Ariel the little mermaid often argues with her father King Triton over her desires to be with humans.  He calls them "barbaric fish-eaters," which actually isn't too far from the truth. One day, Ariel the little mermaid goes to meet Ursula, the Sea Witch (Pat Carroll). They strike a deal, but her part of the bargain may not be what Ariel the little mermaid thought it was. Animation characters always have to be careful about the terms of bargains they strike with their pals, because the results often don't turn out the way they thought. Just ask Shrek in "Shrek Forever After."

Ursula's deal with Ariel the little mermaid turns Ariel into a human for three days in return for Ariel giving Ursula her voice for that time. Ursula carefully puts the voice in a nautilus shell for safe-keeping. If Ariel receives the "kiss of true love" in that time (see Snow White and the Seven Dwarfs" and "Shrek Forever After"), then she may stay on land; otherwise, she reverts to being a little mermaid and becomes Ursula's slave. Ariel the little mermaid hurries to the surface and quickly finds her man, Eric, walking on the beach.

To give you some idea of the quality involved in "The Little Mermaid," every one of the two million bubbles was individually hand-drawn. Two million bubbles. Drawn. By hand. Individually. By someone. That's commitment!  This is a quality production, and a joy to watch.

If you've ever been to Copenhagen or seen it in pictures, you are probably familiar with the famous statue in the harbor of The Little Mermaid.  As an homage, the illustrators for "The Little Mermaid" copied that pose for Ariel the little mermaid repeatedly in this film.

There is talk of a "The Little Mermaid" remake which will be "dark."  I don't know how you make a sweet tale about a lovelorn mermaid dark, but then again, old Hans Christian himself managed it (don't ask). Perhaps Ariel is caught in a net and broiled for a restaurant meal?  I mean, enough is enough, this is a fairy tale for kids, nobody needs a "dark" Ariel the little mermaid love story.

This is a classic fairy tale that every little kid should see, but too few do. "The Little Mermaid" was so spectacularly good that it originated what is known as "The Disney Renaissance," which lasted for a decade and completely revived the studio. The trail of "The Little Mermaid" leads directly to 1991's "Beauty and the Beast," which some would call the top animated film of all time. If the kids liked "Finding Nemo" they certainly should enjoy "The Little Mermaid." Ariel's story is next set for its Diamond Edition DVD release in Fall 2013, complete with 3D Blu-ray which should provide awesome underwater effects. If you want more of Ariel the little mermaid before then, you can always turn to the 2008 prequel, "The Little Mermaid: Ariel's Beginnings," or the 2000 sequel, "The Little Mermaid II: Return to the Sea."

Disney finally announced the release of a Blu-ray Diamond Edition version of "The Little Mermaid." It came out on October 1, 2013, in the United States in multiple versions. "The Little Mermaid" will be released in four different versions: A Blu-ray/DVD Combo in BD packaging (top), the same set in DVD packaging, a Blu-ray/DVD/Digital Copy Combo and, confirming previous rumors, a Blu-ray 3D/Blu-ray/DVD/Digital Copy/Music Download Combo.

The bonus features include:
You may see the official Disney page for the 3-Disc 3D Blu-ray™ Combo Pack here.

Below is the original film trailer.