Chicken Little (2005) - He's the Greatest Dancer in this Disney Movie!

"Chicken Little" (2005), directed by Mark Dindal from a script by Steven Bencich, Ron J. Friedman and Ron Anderson and story by Dindal and Mark Kennedy, was Disney's first fully computer-animated feature film, and it showed the studio still had some work to do to win back its audiences of the 1990s.

Many people are familiar with the "Cola Wars" of the 1980s, when Pepsi challenged Coke's supremacy and Coke famously "blinked." Less well known is that the same thing happened in the 2000s in the context of Disney and its rivals. Facing fierce competition from Pixar, which was eating its lunch in the lucrative animated feature film business, Disney had to do something. It did. 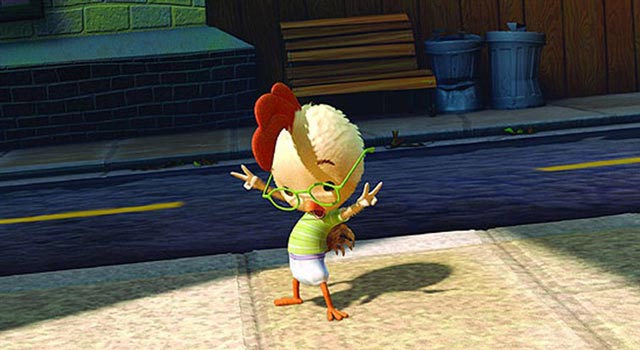 The result basically was the same in both cases - Coke and Disney both remained "on top," depending on how you choose to define that term. Coke went back to its original formula and retained its market share, while Disney eventually bought out its biggest competitor, Pixar.

The source of Disney's troubles was Pixar's (and eventually DreamWorks' and others) continuing perfection of computer graphics. Audiences liked the slick new animation styles being peddled by the upstart animation companies and no longer seemed as excited about Disney's combination of computer imagery and traditional hand-drawn animation. Walt Disney Feature Animation's solution was to lay off its animators and try doing what the others were doing.


A year later, Chicken Little's only remaining friends are fellow outcasts like Abby Mallard (Joan Cusack), who has a crush on Chicken Little, Runt of the Litter (Steve Zahn) and Fish Out of Water (Dan Molina), who wears a helmet full of tap water. Chicken Little wants Buck Cluck to be proud of him, so he joins a baseball team. The coach ignores Chicken Little until the last inning of the last game when the coach finally calls him to bat. Chicken Little hits the ball and rounds the bases, barely making it home after some confusion. For winning the big game, Chicken Little becomes a hero.

Later that night, though, Chicken Little is hit in the head again. He discovers that it is not the sky that hit him, though, but something else that he does not recognize which blends into the background. Chicken Little's friend Fish Out of Water fools around with the piece and pushes a button on its back. It turns out to be a hexagon that flies off into the sky and was hiding a UFO. Once again, Chicken Little rings the school bell to warn the town, but the aliens quickly leave. Nobody believes Chicken Little, and once again he becomes a figure of fun.

The next day, though, Chicken Little and his friends discover an orange alien child that the aliens left behind. The aliens return in a fleet of spaceships, looking for the lost child. They destroy the town with their ray guns. Chicken Little finds his father and manages to show that he is not crazy and that he can stop the aliens. Buck helps fight the aliens, but they all get vaporized, which actually sends them into the alien space ship. Once they get the child back, the aliens restore everything to normal, and Chicken Little again becomes a hero for averting a catastrophe.

The voice cast of "Chicken Little" is chock full of old and new television comedy veterans. Don Knotts, who had been an animation pioneer 40 years earlier as Henry Limpet in "The Incredible Mr. Limpet," voices the Mayor of Oakey Oaks, Turkey Lurkey. Garry Marshall plays Buck with his usual comic flair. Fred Willard, Wallace Shawn, and Amy Sedaris are well-known comics who round out the cast.

Having such amiable actors portraying the characters in this fable was a wise move, making the rote script come alive and enhance the amusement of "Chicken Little" by letting the audience reconnect with old friends once more time. This was one of Don Knotts' final films, and he is his usual amusing self as the mayor.

While this was a feature animated Disney movie, with a top-notch voice cast and all the trimmings, in essence, it was the equivalent of a small, experimental Disney movie. Trying to unshackle itself from dependence on Pixar, this Disney movie has a good technical animation presentation but is completely lacking in its story. Everyone knows what a "chicken little" is, as it is a catchphrase for an alarmist, and this Disney movie did not expand on that concept at all.

It has a lot of bright colors and constant chaos, with amusing dialogue and the types of one-liners you would expect from the cast of comedy pros. The father-son relationship is emphasized, which you also would expect in a Disney movie and is in line with Disney's efforts at the time to win over boys. All of this makes "Chicken Little" a very suitable film for small children. Anyone else, though is likely to be only mildly amused at hearing Don Knotts one more time, before quickly growing tired of the succession of clichés and paint-by-numbers plot turns.

The soundtrack is fairly idiosyncratic, including numbers by Barenaked Ladies, Spice Girls, Joss Stone and Patti LaBelle, and R.E.M. John Debney did the score, which is okay. Perhaps the most amusing aspect of "Chicken Little" for older audiences is the parade of cultural references that the animators include to spice things up a bit. The false opening parodies "The Lion King," and there are nods to "Raiders of the Lost Ark," "E.T. the Extra-Terrestrial," "Independence Day" and "War of the Worlds."

If you are watching "Chicken Little" with your child, you might be able to stop your mind from drifting off by catching the numerous throw-away references - some fairly subtle - to high-profile television shows and films like "90210" and Ridley Scott's "Alien."

Overall, "Chicken Little" is a sweet, inoffensive film for little children. This is an animated feature film that does not attempt to convey a deep message about whatever is the big social cause of the day. Perhaps the most lasting impact of "Chicken Little" is that its mere production showed Pixar that Disney meant to compete in the computer-animation field, thereby perhaps nudging it toward accepting Pixar's takeover by Disney shortly after this film's release. Disney, on the other hand, saw by "Chicken Little's" problems that it might be able to learn a thing or two from its young rival. Disney blinked, all right, but then it opened its big, wide, toothy jaw and swallowed its main competitor whole. Hey, that would make a good animation scene...

There are DVDs, Blu-ray and 3D Blu-ray versions of 'Chicken Little" available.