Pixar was the gold standard of animation for the dozen years after the Disney Renaissance petered out, from about the time of "Monsters Inc." in 2001 through "Brave" in 2012. Pixar's dominance was partly due to Disney's stumbles, which in turn were caused partly by running out of creative juice after an unprecedented run of masterpieces of animation and partly due to the sorts of issues that can arise after such success (cf. Orson Welles' career after "Citizen Kane").

The proof is that Pixar's great run at the top began as the Disney Renaissance ended; and Pixar's own dominance ended, not due to anything that it did, but rather because of the 2013 Disney juggernaut that was "Frozen."

As if accepting that times indeed had changed, Pixar did not release any films for the two years from June 2013's "Monsters University" (which, fittingly, was a prequel to the film that began the Pixar streak in 2001) to "Inside Out" (2015). The latter film thus is a sort of comeback attempt, and it works well as such.

Directed by Pete Docter (who did "Monsters Inc.") and Ronnie del Carmen from a screenplay by Pete Docter, Meg LeFauve and Josh Cooley, "Inside Out" is an animated drama takes an old idea and puts a fresh spin on it. It does not break much new ground but does re-establish Pixar as a creative force in the industry.

Riley is a Minnesota girl who is approaching puberty. We are quickly introduced to the inner workings of her mind, which is emotionally controlled by five central impulses: Anger, Joy, Sadness, Fear, and Disgust. These emotional impulses rule Riley from their Headquarters in Riley's consciousness and can influence her perceptions and reactions. Joy is in nominal control, but the others take over when the time is right.

Everything proceeds normally until Riley, 11, moves with her family to San Francisco. Suddenly, Sadness begins to take a more active role in Riley's life, causing some incidents at school. Joy tries to intervene, but instead only makes things worse by disrupting Riley's core memories, which had kept her stable but which now become dislodged and lost.

The core memories ultimately have to try to figure out a way to return to their prominent place in Riley's mind while Anger, Disgust and Fear fight to keep control over Riley. Their efforts only worsen matters, and soon Riley's personality is in danger of completely disintegrating in the Memory Dump, a graveyard of lost memories. Joy and Sadness also wind up there.

Meanwhile, Riley is about to board a bus back to Minnesota, so Joy, desperate, tries to ride a Recall Tube back to Headquarters alone, but that also is blocked. Joy and Bing Bong wind up in the Memory Dump, where Joy sees some old happy memories that give her an idea about recovering control over Riley. Bing Bong tries to help Joy to escape in Bing Bong's old song-powered wagon but ultimately comes to realize that he is only preventing Joy from returning to Headquarters and jumps out. Joy then combines with Sadness to use the wagon to return to Headquarters, which they find that Anger has shut down. Sadness springs into action and takes control, inducing Riley to give up returning to Minnesota and go home.

Sadness goes to work, reinstalling the core memories and causing Riley to finally tell her parents how much she misses her old life in Minnesota. Joy then combines with Sadness to create a new core memory that helps form a new personality island. This restores Riley to stability, and we see Riley a year later with a new, improved Headquarters that has control over entirely new personality islands and complex core memories.

"Inside Out" is one of those films that is better as executed than it is as an idea. The conceit of an anthropomorphic group modeled on a NASA Mission Control controlling a person has been around at least since Woody Allen's 1972 "Everything You Always Wanted to Know About Sex* (*But Were Afraid to Ask)," and it was used in Fox's sitcom "Herman's Head" in the early 1990s. In the music industry, they distinguish between a "good song" and a "good record," and "Inside Out is a good record.

Pretty much everybody loves "Inside Out," as demonstrated by strong box office performance and standard critical raves. The film took about five years from initial idea to the screen, which is fairly typical for a top animated film, and was a very calculated effort. for example, a young girl was chosen as the subject because of research showing they were very emotional (and probably also because it is a key target demographic).

Since "Inside Out" came at the end of a long absence of Pixar, the film was eagerly awaited but expectations fairly low. Still, there were hints that the Pixar magic was beginning to run the slightest bit thin: "Inside Out" did not debut at #1, coming in behind "Jurassic World," though it did capture the top spot a couple of weeks later due to weak competition.

The overseas box office was strong, though it didn't break any records like, say, "Frozen," and there is no chance of winning the year's box office crown. Pixar built its reputation on happy-go-lucky characters who overcome adversity with a smile, so why it bet the big comeback film around a sad little girl and then threw in the ubiquitous "animated characters must find their way home" storyline is a bit of a mystery, but box office doesn't lie.

The script essentially takes well-known buzzwords about the psyche and anthropomorphizes them, which is a good way to illustrate the craft of animation and insert 'comic bits' without actually creating much that is new. Worries that the storyline might be too complex for a younger audience were misplaced, but even the best animation in the business can't hide a pedestrian and over-plotted storyline. 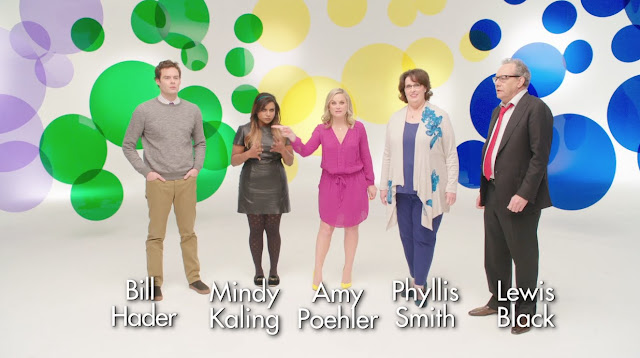 The cast is led by Amy Poehler as Joy, Phyllis Smith as Sadness, Mindy Kaling as Disgust, Lewis Black as Anger and Bill Hader as Fear. Pixar pulls an old trick by getting genial veteran tv character actor Richard Kind to play Bing Bong, the sort of sentimental self-sacrificing role that he is ideally suited to, and John Ratzenberger continues his string of appearing in Pixar films by voicing Fritz. There also is a bit of insider casting decisions, as puppeteers Dave Goelz and Frank Oz of "The Muppets" were given small voice roles. Veteran Pixar contributor Michael Giacchino ("Up") composed the score, which is pleasant but does not contain any show-stoppers or guest artists.

Overall, "Inside Out" is a worthy effort that continues the string of Pixar successes. The craftsmanship is superb and undeniable. However, it definitely is not one of Pixar's best, such as "Monsters Inc." or the "Toy Story" films. You will enjoy the brisk 94-minute running time and probably wind up looking forward to watching "The Good Dinosaur," Pixar's late-2015 follow-up. Odds are that you will swiftly put the decidedly light "Inside Out" out of your own mind.

Below, someone collected together all the various clips of "Inside Out" that have been released so that, basically, you can watch half the film. The first two clips were intended to be included in the film, but ultimately were taken out, so that's an extra treat if you are a big fan.