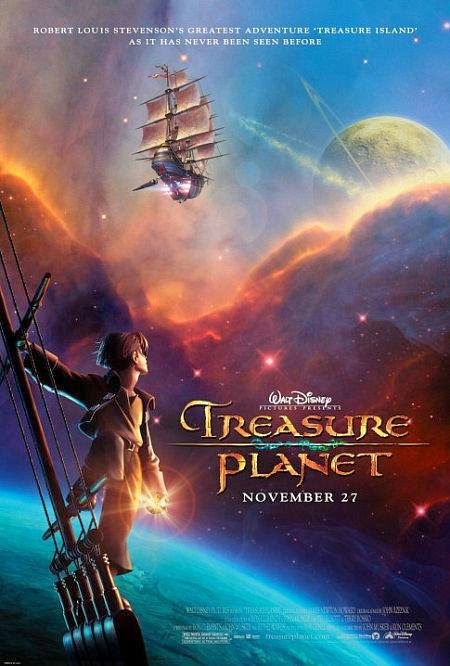 Walt Disney Feature Animation adapted the 1883 Robert Louis Stevenson classic novel "Treasure Island" in "Treasure Planet" (2002), another attempt by Walt Disney Pictures to broaden its viewing audience. The directors, John Musker and Ron Clements had ignited the Disney Renaissance with their "The Little Mermaid," expanded it with "Aladdin," and extended it with the comic "Hercules."

"Treasure Island" was one of their pet projects which they had been planning since the mid-1980s. It has the distinction of being the first feature-length film to be released simultaneously to both regular and IMAX theaters. While people tended to like this Disney movie when they actually saw it, "Treasure Planet" bombed at the box office, the first real clunker of an animated Disney movie since "The Black Cauldron." The plan to draw in male viewers by foregoing the princesses and the witches didn't work, and therein lies a tale, a pirate's tale, aaaarrrrggggghhhh matey!

As a child, Jim Hawkins (Austin Majors as a child, Joseph Gordon-Levitt as an adult) is interested in the space pirate Captain Flint. As a teenager, he helps his mother Sarah (Laurie Metcalf) out at the family inn and likes to go solar surfing in his spare time. One day, a rocket crashes nearby and the pilot, Billy Bones (Patrick McGoohan), gives Jim a map and the single caution to "beware the Cyborg."

The map turns out to show the location of Captain Flint's Treasure Planet. After Bones dies, a gang shows up and burns the inn down, with Jim, his mother and Jim's friend Dr. Delbert Doppler (David Hyde Pierce) barely escaping.


Doppler, who looks like a dog, obtains a ship for them to use to get to Treasure Planet. Captain Amelia (Emma Thompson), a feline creature, commands the "Legacy" along with her first mate Mr. Arrow (Roscoe Lee Brown). Among the crew is the cook, father-like John Silver (Brian Murray). Jim works with Silver and forms a thin friendship with him as a paternal figure. Silver falls overboard at one point but is saved by Jim, though Arrow is lost during the same incident. Jim blames himself for failing to secure the lifelines and allowing Arrow to drift away, but sabotage by crew member Scroop (Michael Wincott), an insect-shaped being, actually is to blame.

The Legacy reaches Treasure Planet, but Silver leads a mutiny because he wants the gold, aaarrrgghhhh. Jim, Amelia, and Doppler abandon ship, but Jim forgets to take the map. Silver, though, assumes that Jim took the map with him. Silver shows that he truly does like Jim by not harming him as he escapes. The lifeboat that Jim and the others use, though, is shot down by another of the mutineers, injuring Amelia.

Once on Treasure Planet, Jim and the others meet B.E.N. (Martin Short), a comic robot who has been abandoned on the forested planet. Silver and his gang soon turn up, but Jim and B.E.N. evade them and return to the Legacy to get the map. Scroop, though, is guarding the ship and is about to capture Jim when B.E.N. turns off the artificial gravity, sending Scroop helplessly off into space while Jim manages to hang on to the mast. When Jim and B.E.N. get back to B.E.N.'s house, they find that Silver has captured Doppler and the injured Amelia, and Jim must give Silver the map.

The map leads them to a space portal which transports people to anywhere in the universe, with Flint's treasure deep beneath the planet's surface (one can think of a lot better uses for the portal than getting treasure). In fact, Treasure Planet isn't even a planet, but instead a giant spaceship. The group goes down to the treasure, and they find the skeleton of Flint holding a missing part of B.E.N.'s memory. When Jim inserts the memory back into B.E.N., the robot warns that the planet will explode once the treasure is disturbed - which they have just done.

The planet, in fact, does erupt into spasms, lava killing two of the pirates. Silver sacrifices a fortune in treasure to save Jim from certain death, and everyone escapes to the Legacy. The ship, unfortunately, has been damaged, and things look bleak. However, Jim and Doppler figure out a way to send the ship through the space portal, transporting everyone back to the spaceport on Jim's own planet as Treasure Planet disintegrates.

Amelia detains the pirates and recommends Jim for the Interstellar Academy. Jim, meanwhile, catches Silver trying to escape but decides to let him go. Silver leaves behind his pet Morph (Dane A. Davis), a shape-shifting creature. As he leaves, Silver throws Jim enough booty that he picked up on Treasure Planet to rebuild the family inn.

"Treasure Planet" may be set in space with goofy animal-like creatures, but it is surprisingly faithful to "Treasure Island." The relationship between Silver and Jim is the key to the original Robert Louis Stevenson story, and that bond transfers intact to the Disney movie. "Treasure Planet' is all about the story, and Jim still is a resourceful, capable kid and Silver still a loveable old rogue (classically played by Robert Newton in live-action films - he's the guy that came up with "aaaaarrgggghhhh matey!"). The key difference is that the father-son relationship between Jim and Silver is only really implied in the book, whereas "Treasure Planet" hammers at it time and time again. Subtlety is the better route in this case.

The animation of "Treasure Planet" is somewhat unique. Traditionally hand-drawn characters were used along with cutting edge animation technology that enabled the characters to be placed in a virtual 3D environment. While not quite true 3D, the illusion of depth is apparent, just as it was in "Tarzan." The concept of "virtual sets" was introduced using a further refinement of the animation technique known as "Deep Canvas."

The overall look of "Treasure Planet" was derived from traditional illustrations of books like "Treasure Island," but there is still a sharp science-fiction edge. Sound effects also were traditional, with old toys and other mechanisms used to simulate ship sounds. "Treasure Planet" had a traditional orchestral soundtrack by Disney veteran James Newton Howard, with just a couple of pop songs thrown in by John Rzeznik.

Everybody seemed to like the film, there were many nods to the antecedents of the Disney film, and the animation was as good as any ever produced - so what happened? First off, the script is a bit fuzzy - the one thing that Bones says is, "Beware the Cyborg," but it's never really made clear that Silver actually is this dreaded Cyborg - and, if he is, he really isn't that terrifying, certainly not worth a man's dying words. The notorious Flint also is built up early - couldn't they at least have had him alive at some point during the search? Another problem was that the story, fascinating in a 19th Century seafaring setting, simply wasn't that interesting in a culture infatuated with death stars and gleaming white spaceships with elements of fantasy and sorcery mixed in with traditional science fiction.

The plot has a slightly gimmicky feel, and not much happens - Jim gets the map, they explore the planet, find the treasure, and escape without it. In that sense, it is like a similar failure from around that time of the simplistic "The Emperor's New Groove." There isn't a sense of wonder, no real danger, and the film pulls its punches when it makes Silver a bit too loveable and removes the edge that comes from wondering what the old buzzard will actually do when Jim it in danger. Making Jim a full-fledged teenager probably also hurt - in the classic live-action films, Jim is a young boy ("Aye, there be young Jim 'awkins"), which gives his heroics and successes a bit more bite and makes Silver's ultimately paternal protectiveness instinctively understandable. It simply isn't as engaging to see a 17-year-old figure things out and skirt danger as it is a seven-year-old. As it is, there is a bit too much of the warm, fuzzy feeling floating through Treasure Planet for it to be engaging for any but the smallest of children.

It is easy to make fun of the thinking behind any film that fails (what's next, "Gone with the Asteroids"? "Splendor in the Anti-matter Warp Core"?), but "Treasure Planet" doesn't deserve that. The best answer to the abject failure of "Treasure Planet" is probably two-fold and with good intentions. First, with "Treasure Planet," Disney movies were trying awkwardly to reach out to boys and the studio just didn't know how to do it yet. Apparently, studio executives thought that simply having male characters that bond would do it, when it takes a lot more than that. The studio was still awkwardly trying a decade later with "Tangled," and ultimately seems to have just given up the attempt - at which point it had its biggest hit ever with "Frozen."

Secondly, the Disney Renaissance (which had just ended with "Tarzan," though nobody realized that yet) had set the bar too high for simple, straightforward tales like this. Pixar and DreamWorks were coming up with completely new concepts of fantasy and wonder, whereas "Treasure Planet" simply re-told a story that seemed a little too familiar. The Disney movie animation and overall execution were stellar as usual, but Pixar and the others were doing that plus creating imaginary new worlds in films like "Shrek" and "Toy Story" which made a simple space trip for booty seem very old hat by comparison. It takes more than a few aliens that look like bugs to attract boys these days.

Musker and Clements would bounce back from this fiasco, but Disney movies, in general, were mired in a very tough decade. In fact, no animated Disney movie would turn a profit on its initial run until Musker and Clements returned with "The Princess and the Frog" some years later, so clearly it wasn't their fault. Something a lot deeper than a mere choice of scripts was affecting all animated Disney movies. Fortunately, Musker and Clements were just the directors to right the ship the next time around. All in all, "Treasure Planet" is extremely under-rated, not quite a gem or "hidden classic" or anything like that, but a fun film with intense animation that many younger children especially would enjoy. It certainly is more entertaining than anything you will see in a weekly television series and a great way for a kid to learn a classic tale. A two-disc Blu ray/regular DVD package (the "Tenth Anniversary edition") that came out in 2012 is the best choice.