Atlantis: The Lost Empire (2001) - A Disney Movie Gambling on Something New - And Very Old

Atlantis: The Lost Empire - Milo Under the Waves 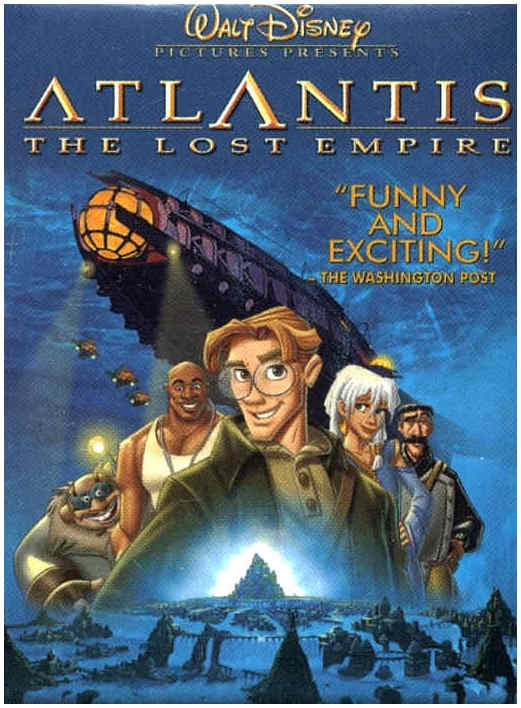 Disney movies usually tackle fairy tales, or contemporary novels with cute animal characters, or something else that is extremely kid-friendly. With "Atlantis: The Lost Empire" (2001), directed by Gary Trousdale and Kirk Wise for Walt Disney Features Animation, a Disney movie did something else entirely. Science fiction stories usually appeal more to adults than children unless there is a cuddly robot or a high-profile princess or something added to bridge the gap (see Disney's own "The Black Hole" for an example of that). There wasn't anything like that in this Atlantis Disney movie based on Plato and Edgar Cayce, though, so the task of wooing the younger viewers fell to the spunky Michael J. Fox and company to create a warm and inviting atmosphere for boys and girls. Upon their success at doing that hinged the success of the entire film upon first release.


A tidal wave, triggered by an explosion, forces the evacuation of ancient Atlantis. The Queen of Atlantis is absorbed into a powerful crystal which powers the city and protects its heart. Her daughter, Princess Kida (Cree Summer), is left behind with the city. Atlantis quickly vanishes beneath the seas.

It is 1914, and Atlantis-specialist Milo Thatch (Fox) gets a lead on the location of a manuscript ("The Shepherd's Journal") which supposedly reveals the secret location of of the lost Atlantis continent. He is turned down by his employer, the Smithsonian, for funds by Fenton Q. Harcourt (David Ogden Stiers - his character's name being a subtle play on "Harcourt Fenton Mudd" of "Star Trek") to find it. However, a woman named Helga Katrina Sinclair (Claudia Christian - her character's name a nod to "Babylon Five") shows up and introduces Milo to the wealthy Preston B. Whitmore (John Mahoney). It turns out that Whitmore already has the journal and, purportedly as repayment of a debt to Milo's grandfather, offers Milo the chance to visit Atlantis once he translates it for him.


The survivors hikes through the underground caves and finally finds Atlantis. Kida, the Queen's young daughter from before Atlantis, greets them. She is still young and cute despite being thousands of years old. The language of Atlantis is similar to modern languages, which derived from it, so there is no communication problem. Milo immediately comes in handy, because the Atlantis natives need someone to translate their writings, which no Atlantis resident can understand. This involves swimming down to Atlantis' submerged heart, the one that survived because of the crystal. Milo and Kida find that the crystal still functions down there to protect Atlantis, but it is getting worn out. A missing page from The Shepherd's Journal described the Atlantis crystal, and Milo wonders why it was removed.


Milo leaves Atlantis and returns to the surface with Kida and confronts Rourke about the missing journal page. Turns out that Rourke indeed has the page and that the entire mission, known to everyone but Milo, was intended to recover the crystal and sell it. Rourke goes down to Atlantis to take the crystal, and in the process mortally injures Kida's father, King Nedakh (Leonard Nimoy). The crystal is beneath the King's Atlantis throne room, but when Rourke tries to steal it, the crystal suddenly merges with Kida because, as the dying King explains, the crystal has become sentient and seeks out Atlantis royals hosts with which to join when under threat. Rourke, though, does not care about the fate of Atlantis, so he decides to kidnap Kida, since she and the crystal now are one.


The crystal, of course, is required to keep Atlantis intact, so removing it would destroy the city. Milo argues with the mercenaries and gets them to change sides against Rourke. The Atlantis King also has a crystal, and before he dies he gives it to Milo in hopes Milo can use it to save Atlantis. A battle results, with Milo and Rourke facing off against each other inside a volcano with the fate of Atlantis at stake. However, the volcano erupts, and it looks like it may not matter who wins or loses, because Atlantis could soon be consumed by lava.


The entire process behind the creation of "Atlantis: The Lost Empire" was muddled. Disney once was a disciplined studio that had a clear mission and stuck to it. With the threatening rise of Pixar, however, and that studio's succession of blockbuster animated hits, the Disney brass became unnerved and went for more Pixar-like projects. At least, that is how it appears from the outside, because there is no other plausible explanation for the genesis of "Atlantis: The Lost Empire."

So, with the film industry ground shifting beneath its feet, Disney went with this half-baked idea conceived over a dinner table by the people behind "The Hunchback of Notre Dame," who were motivated to keep their jobs by moving on to another project. Rather than try to create another "The Little Mermaid" or "Beauty and the Beast," the studio green-lit a project with no clear intended audience in a genre it never before had attempted.


One of the beauties of Disney movies, looking at their progression over the years, is their gradual, almost glacial evolution over time. That enabled the Disney movies to change remarkably little all at once, yet just enough to accomodate a changing audience that didn't even recognize anything had changed. "Atlantis: The Lost Empire" tried to accomplish about three decades worth of change in one gulp.


With "Atlantis: The Lost Empire," Disney just about ditched everything the studio was known for except the process of animation itself. The problem was that with a reputation for making kid- and family-friendly fare, suddenly Disney with "Atlantis: The Lost Empire" was seeking out a whole new audience, one which wasn't particularly receptive to its charms. As one tiny example, Disney had an exclusive licensing agreement with McDonalds, which loved to promote Disney's films aimed largely at children. McDonalds did what it usually did and promoted "Atlantis: The Lost Empire" with Happy Meal toys and the like. However, there was nothing about this film to excite children, so focusing promotional activities on children was pointless.


While Pixar or DreamWorks could crank out a "Toy Story" without too much trouble, Disney had a lot of baggage to overcome if it was to reach out to a skeptical new audience with something like "Atlantis: The Lost Empire." Good as it is in many respects, "Atlantis" failed to do that (competing against the new DreamWorks hit "Shrek" did not help, just as competing against "Home Alone" had not helped "The Rescuers Down Under"). "Atlantis: The Lost Empire" also continued an unfortunate Disney movie trend that began with "The Fox and the Hound" of making this a "message" film, the message this time being against greedy-pig capitalists with no respect for others.


"Atlantis: The Lost Empire" did not find its audience during its theatrical run, almost certainly lost the studio money on its initial release, and soon became forgotten by the general public. The skeptical part of the audience, just to be clear, is primarily boys who with very good reason think that every Disney movie must have a princess obsessed with all that yucky love stuff that gets in the way of the adventure. Another criticism is that Disney movies these days are brimming with political correctness which distracts from a good story. Girls, on the other hand, saw in "Atlantis: The Lost Empire" lots of gadgets and not too much of a high-profile princess, so....


All that aside, "Atlantis: The Lost Empire" is not a bad film at all for girl or boys. Animators at three different Disney animation studios - Burbank, Orlando, and Paris - contributed, and it was shot in a wide-screen format which resembled old Cinemascope features of the 1950s and 1960s by auteurs such as Stanley Kubrick. The studio hired "Hellboy" creator Mike Mignola to give "Atlantis: The Lost Empire" a distinct visual style, and the pull-out scene at the end - showing Atlantis restored - is technically marvelous and quite breath-taking.


"Atlantis: the Lost Empire" is a Disney movie loaded with CGI, another departure for the studio. Problems arose because both 2D and 3D artwork was used, but everything was resolved through technical advancements. James Newton Howard composed the score, which is distinctive overall but has no individual songs on which the viewer can focus and start humming on the drive home.


The "Atlantis: The Lost Empire" actors are all very winning and amiable television veterans, mainly veterans of  (and I'm sure not coincidentally) science fiction products such as "Star Trek," "Babylon 5," and "Back to the Future." Claudia Christian of 'Babylon 5" voices Helga in a sensuous manner that gives her appearances some mystery, while Leonard Nimoy of "Star Trek" gives the role of the "Atlantis: The Lost Empire" King unexpected gravitas. Michael J. Fox of "Back to the Future" is a curious choice as the scholarly lead, given his "gee, whiz" delivery, but everybody loves Fox, so you can't blame him for the film's initial failure - but, much as we love him, the fact is that he is wildly mis-cast as the clearly nerdy character Milo.


Phil Morris as Dr. Sweet stands out for his rapid-fire line delivery, and John Mahoney gives the character of Whitmore enough energy to make it believable that he is not just a money man, but someone who actually would do some of the "Atlantis: The Lost Empire" dirty work himself. James Garner does a wonderful job in the first half of this Disney movie making Rourke amiable and paternalistic - all of which he then completely shatters in the film's final half hour. The Disney movie people obviously did a very thorough job of researching all that is known about Atlantis and incorporating bits and pieces of it in the script.


"Atlantis: The Lost Empire," as is so often the case with Disney movies, the studio recouped its fortunes after its release on home video, where it did gangbusters VHS and DVD business and almost certainly tipped the project form a net loss to a nice financial gain. There also are several enjoyable "Atlantis: The Lost Empire" video games, though most are out-dated by now. "Atlantis: The Lost Empire" is scheduled to be released on Blu-ray on March 12, 2013, along with its sequel, "Atlantis: Milo's Return," and that should be a fun package to get for those who previously enjoyed the film or just the idea of Atlantis.

Below is the High Definition trailer.