The Emperor's New Groove (2000) - David Spade and John Goodman, How Can You Go Wrong?

Walt Disney Feature Animation was working on several different projects at once - "Atlantis: The Lost Empire," "Dinosaur," "Tarzan," the never-ending "Fantasia 2000," and some others, all in vastly different stages of development - but one project, in particular, seemed like a sure thing, the one that turned into "The Emperor's New Groove" (2000), directed by Mark Dindal from a script by David Reynolds.

At that time, in 1998, the project had the tentative title "Kingdom of the Sun," with a convoluted plot about witches stealing the sun because it bothered them and other twists. The project was being guided by Roger Allers, who had helped direct "The Lion King," contributed to many of the Disney Renaissance and previous successes, and who was well-respected by all.

Allers, though, got in over his head and let the project fall behind, a major no-no when Disney had major licensing deals in place for its scheduled mid-2000 release. Allers laudably was trying to craft something original and epic, but Disney movies at that time were being cranked out like an assembly line, and there wasn't time to both refine a brand new story and assemble it into a finished product - subjects of animated Disney movies around that time were the aforesaid "Tarzan," "The Hunchback of Notre Dame," and "Hercules," all of which had established characters and storylines. 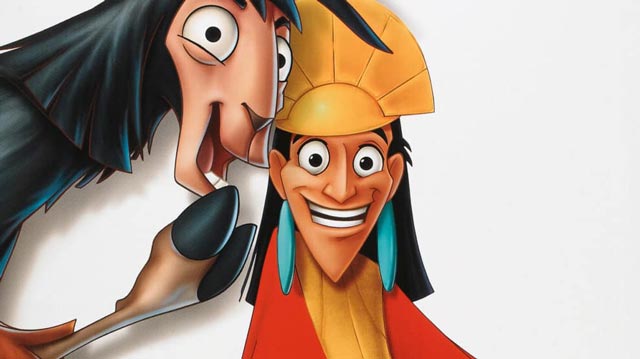 Dindal was brought in to add some jokes, Allers left because they wouldn't allow him six additional months to do the job right (which ultimately happened anyway, but Hollywood isn't high school, you don't always get extensions), and the project got a new name, script, composer (John Debney), characters and animation. Basically, the entire "The Emperor's New Groove" project came to a dead halt and then veered off in a completely new direction just two years before it was released - an amazingly abrupt and quick turn-around for an animated Disney movie.

Even after Allers left, though, the focus for "The Emperor's New Groove" remained muddled. While the title was a take-off on Hans Christian Anderson's classic short story "The Emperor's New Clothes," at no time did the production have much of anything to do with that story beyond the Emperor being vain and blinded to reality. Instead, the script originally veered off toward Mark Twain's "The Prince and the Pauper" (Allers had directed a short of that story years before), with an Incan Emperor switching places with a peasant on a whim. That idea didn't work either for studio executives - "The Prince and the Pauper" has been done to death in live-action productions - so when Dindal came in, script changes were pounded out until the story resembled neither "The Emperor's New Clothes" nor "The Prince and the Pauper" but something entirely new. 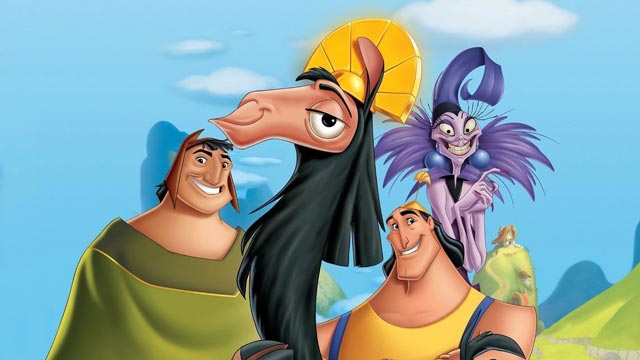 What resulted is better than might have been expected under the circumstances, but "The Emperor's New Groove" has no clear focus or satisfactory resolution and wound up being the first Disney movie aside from special project "Fantasia 2000" to lose money - a lot of money - in many years. So, what did "The Emperor's New Groove" finally become? A hilarious comedy, with lots of sight gags, word-plays, and the kind of manic fun that had been missing during an era of serious - almost reverent - themes such as "The Hunchback of Notre Dame" and "Pocahontas." There's nary a song to be heard, it's all just fun and games.

Kuzco (David Spade) is the arrogant teenage Emperor of the Incas. He is completely full of himself and decides to build an enormous villa, Kuzcotopia, on a nearby hill. Kuzco calls in the local village leader who lives there, portly Pacha (John Goodman), to tell him he has to leave. Pacha protests, but Kuzco is adamant. Meanwhile, Kuzco wilfully terminates his advisor, Yzma (Eartha Kitt), for meddling in his affairs and usurping his role as Emperor in Kuzco's absence. Yzma decides to stage a coup and has her muscle-bound assistant, Kronk (Patrick Warburton), poison Kuzco. The poison, however, just turns Kuzco into a llama. Making the best of a bad situation, Yzma orders Kronk to take Kuzco the llama out into the countryside to a waterfall and kill him there, so Kronk puts Kuzco in a sack and heads out.


Kronk, though, feels bad about the entire situation and gets careless, allowing Kuzco to escape to Pacha's village. There, not knowing the circumstances, Kuzco mistakenly accuses Pacha of being the one who poisoned him to avoid having to move. Pacha is put out by this and tells Kuzco the llama that he will help him, but only if Kuzco agrees to build his villa somewhere else. Kuzco, still arrogant, refuses and leaves, determined to return to the palace one way or another and re-assert his authority. On the way, Kuzco is attacked by jaguars, but Pacha turns up to save him. Kuzco then insincerely agrees to Pacha's terms so that Pacha will help him return to the palace. 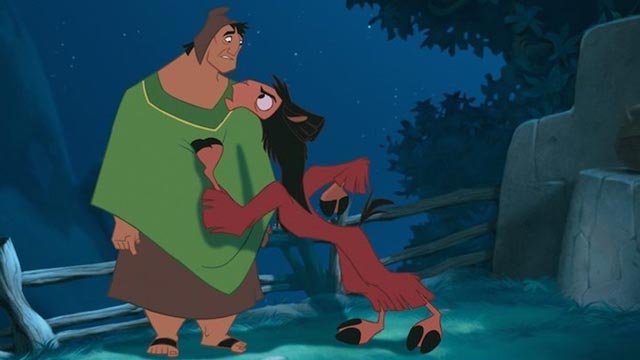 Kronk returns to the palace and tells Yzma, who has taken over because everybody thinks Kuzco dead, what happened. They set out to find Kuzco and finish the job. The pair wind up at the same roadside diner as Kuzco and Pacha. Pacha tries to warn Kuzco about Yzma, whom he has overheard discussing her plans, but Kuzco doesn't believe him. Pacha, annoyed, leaves, but Kuzco finds out the truth. After a lonely night alone, Kuzco finds Pacha again, and they head back to the palace, with Yzma and Kronk still in pursuit.

Kuzco heads to Yzma's "secret" laboratory looking for an antidote and finds some. Yzma, meanwhile, alienates Kronk by insulting him, then finds Kuzco and Pacha and calls the palace guard on them. Kuzco instinctively grabs some of the potions and the two men flee. Unfortunately, Kuzco has no idea how much of the potion to take, so his efforts to reverse the spell only change him into other animals, and then back into a llama. Yzma catches them but accidentally steps on some of the antidotes, changing herself into a kitten (Eartha Kitt was "Catwoman" in the "Batman" tv series). Kuzco manages to regain his human form, and the appearance of Kronk prevents Yzma from drinking some of the antidote herself. Kuzco then has to decide what to do about his villa, and Kronk takes control of kitten Yzma.

"The Emperor's New Groove" is an amusing madcap animated comedy despite its flaws. Kuzco may be spoiled and rotten, but he has flair and style which makes him entertaining. Anybody familiar with David Spade knows his sarcastic style of comedy, and he delivers in "The Emperor's New Groove." John Goodman's Pacha becomes Kuzco's buddy, forming a team with the llama-Emperor that teaches both of the men some lessons about relying on someone else. His sense of humility rubs off on Kuzco, providing the dynamic that gives the film its bite. Kuzco is a changed man after his adventure, and in a good way, thanks to Pacha.

Eartha Kitt's Yzma is a weak Disney villain, though she has an amazingly perfect villainous voice. She is not so much evil as she is eccentric and weird, but her intelligence shines through. She has big plans but lacks the attention to detail and follow-through to make them happen. Her carelessness extends to her laboratory, where she apparently doesn't really understand her own concoctions and is more of a dabbler than an evil genius. As someone who over-thinks her schemes, she is amusing but ultimately ineffective, making her not much of a threat to overcome and a weak link in "The Emperor's New Groove." Villains who just don't finish the job are among the most frustrating in Disney movies, and that sums up Yzma.

Eartha Kitt's character, though, is not the main problem of "The Emperor's New Groove." There simply isn't much story. The basic plot is that Kuzco is transformed, escapes to the countryside, returns and rights the wrongs committed against him. Everything else is merely the usual Disney movie bits that always appear, but that here take over the entire film. For example, much time is taken up by Kuzco and Pacha crossing a gorge covered by a rickety bridge, which is such a stereotype of South America that the idea of including such a hoary old worn cliché is funny in and of itself for all the wrong reasons ("Oh, look out, here comes the inevitable rickety bridge scene!).

Whose fault was this fiasco? Well, that's a great question that has no answer. Sting was hired to do the music for Allers' concept, then fired when Allers left (though some of his compositions did find their way into the film, one performed for some reason by Tom Jones). Sting had his wife, Trudi, film a documentary about the production, "SweatBox," that has been kept tightly under wraps until recently. Anyone truly interested in how Disney movies are put together might want to watch that and draw their own conclusions. One way of looking at it is that both the creative types and management were wrong, the former for not buckling down and realizing that animation is a business with deadlines that are important and must be respected, the latter for not accommodating a little more creativity and the time it takes to do that along with the necessary marketing deals. When everybody digs in their heels, everybody loses.

All in all, "The Emperor's New Groove" has a saving grace despite the lack of focus and the quickie plot: the characters are very appealing. Kuzco and Pacha form a dynamite buddy combination thanks to the superb vocal skills and style of Spade and Goodman. Kronk also is very funny (Patrick Warburton knows how to play fuzzy-headed characters to perfection and provides welcome comic relief), and Yzma may not be much of a threat, but she is an inventive and clever villain in her own way with a perpetual scowl. 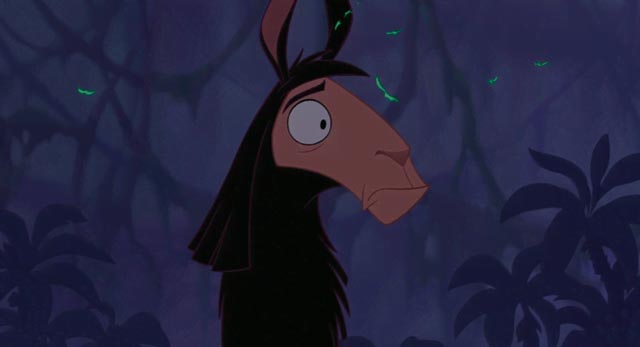 There are lots of great lines in "The Emperor's New Groove" that may not look particularly sharp on paper but are delivered well and funny in context. What there is of the story really is innovative and fresh - you don't see a lot of Disney projects about the Incan Empire. There also are echoes of events of the Roman Empire in "The Emperor's New Groove," as Roman Emperor Nero supposedly burned down half of Rome to build himself a giant villa on a hill. So, there are lots of neat historical references in the script for us nerds to appreciate.

"The Emperor's New Groove" is certainly worth watching, especially if you enjoy David Spade and John Goodman. Don't expect much of a story, enjoy the laughs and the comic complications of Spade being turned into a llama, and you will have a good time.