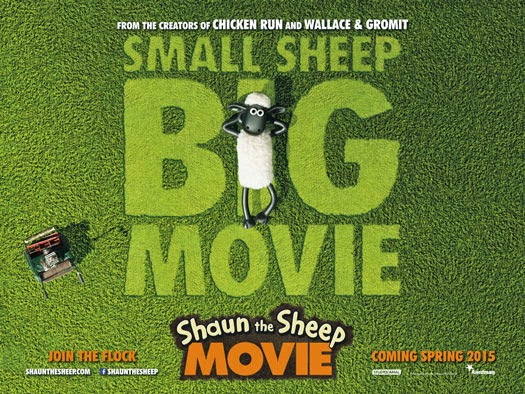 "Shaun is due to star in his very own movie! From Aardman, the makers of Wallace and Gromit and Chicken Run, Shaun the Sheep is coming to cinemas worldwide in spring 2015. Here’s the first teaser trailer to mark the start of his big screen adventure!﻿"

Aardman is a British outfit begun many years ago by a couple of blokes in their garage. They are known for "Chicken Run" and "Wallace and Gromit," two amiable films with a decidedly English slant. This also is a stop-motion animation film, which is what Aardman began doing and probably is best at. We don't know anything about the film beyond what is in the trailer and a few tidbits released by the creators. However, it is bound to be amusing and also quite, er, British, with classic British World War II-movie references scattered about.


The setting is Mossy Bottom Farm in the north of England. The animals are a bit too clever for their own good, and there is no actual dialogue, even from the human characters. Due to an accident, Shaun and the rest of his sheep buddies are let loose and go into the neighboring city, where problems develop. Shaun then must assume leadership and guide them back to Mossy Bottom Farm.

The character of Shaun the Sheep goes all the way back to a 1995 Wallace & Gromit short called "Close Shave," which won an Oscar. He since has starred in his very own BBC series beginning in 2007.

Below is the entire "Wallace & Gromit A Close Shave" 1995 short that started it all to get you warmed up.