The Sword in the Stone: Merlin is One Rambunctious Dude

King Arthur was hot in the early 1960s. Author E.H. White had polished off his massive tetralogy about him in 1958, there was a Broadway musical based on those books called "Camelot," and the Kennedy Administration was known popularly as being a sort of re-birth of "Camelot."

It must have seemed the ideal time for a film about the legendary British king, so Walt Disney set the crew to work it up. The result was "The Sword in the Stone" (1963), a tale set during Arthur's boyhood and accession to the throne.

It is England several generations after the Romans have left. The king, Uther Pendragon, passes away without an heir to the throne. The barbarian hordes are not far away, so a strong king is vital. Mysteriously, a sword whose blade is embedded in an anvil appears, with an inscription stating that whoever can pull out the sword shall be king.

But nobody can remove the sword, so the throne remains vacant. Long afterward, a boy named Arthur (voiced by Rickie Sorenson, Richard Reitherman and Robert Reitherman), who is more commonly known as Wart, is hunting with his older brother Kay (Norman Alden) near the cottage of Merlin (Karl Swenson), the most famous wizard in the land.

Arthur winds up at the cottage and Merlin decides to tutor him. He takes the boy back to Arthur's home, a castle owned by Arthur's foster father Sir Ector (Sebastian Cabot). Ector wants nothing to do with Merlin, who complies and disappears, causing Ector to change his mind and allow Merlin to stay.

Sir Pellinore (Alan Napier) announces that a jousting tournament shall be held in London at the start of the new year, the winner to be crowned as king. Ector chooses Kay to be their champion and has Arthur serve as his squire.

Merlin, meanwhile, continues his tutoring of Arthur. He transforms them both into fish, and they swim in the castle moat to learn physics. While doing so, Arthus is attacked by a pike and only saved by Merlin's owl Archimedes (Junius Matthews). When Arthur tries to tell Ector about this later, Ector believes the boy is making up a story and sends him to clean up the kitchen as punishment.

Merlin takes care of the dishes with his wizardry and gives Arthur another lesson, this time turning him into a squirrel. He almost gets eaten by a wolf (James MacDonald) but is saved by a female squirrel (Ginny Tyler), who falls in love with him. When they return to the kitchen, Ector is upset that Arthur himself did not do the dishes and as punishment replaces him as Kay's squire with Hobbes.

A third lesson, this time as birds. Archimedes leads the lesson, but Arthur is attacked by a hawk and only escapes by flying down a chimney. It turns out to be the home of Madam Mim, a witch. She almost destroys Arthur, but Merlin arrives and challenges Mim to a wizard's duel, which involves changing themselves into animals for a fight. Mim becomes a fierce dragon, but Merlin counters by becoming a germ that infects and defeats her.

New Year's is approaching and Kay is knighted, but Hobbes gets sick and can't serve as a squire, so Arthur fills in. Merlin feels this is pointless and says so, but Arthur is pleased to be a squire again. Everyone travels to London except Merlin, who transports himself to Bermuda after shouting "Blow me to Bermuda!" in frustration at Arthur's attitude.

Losing Kay's sword, Arthur has to find another in a hurry. He doesn't know what to do. Then Archimedes notices a sword half-buried in a churchyard rock. Arthur has a sudden idea: maybe he can replace Kay's sword with that one? But nobody ever has been able to remove it from the anvil.

The film was a modest success, which was much appreciated after the disaster that had been "Sleeping Beauty." Disney probably felt that it was high time to tell a story focused on a young boy rather than a girl, and in that sense, this was an artistic success. It had the tragic misfortune of opening shortly after President Kennedy's assassination and after the Broadway show had run its course, causing it to seem like a mistimed after-thought. That it did as well as it did, under those circumstances, becoming the sixth-highest grossing film of 1963, is a testament to its overall quality.

The animation is clear and colorful, but nowhere as stylistically unique as that earlier film. The most fun aspect is the drawing of the animals when Arthur is learning his lessons: their attractiveness foreshadowed the direction of the next film. The film actually was not too far off from the "Disney's House of Mouse" television program, with Merlin, in particular, being a semi-regular on that show. Merlin, in fact, is probably the enduring result of the film, becoming a regular at the various Disney theme parks.

It is a fairly straight-forward re-telling of the legend of King Arthur, though with several added Disney embellishments. Arthur is made into a sort of Cinderella figure, with the evil step-father demoting him and favoring his inept real son. Interestingly, it was received better in England than in the United States. The humor is a bit broad at times, such as when Merlin says the wrong thing and is transported clear across the Atlantic (with, of course, Bermuda not having been discovered at that time, but that is beside the point). The film veers between this almost slapstick quality and an almost solemn tone, which gives it an uneven feel.

It is not a bad film from which to learn the story of King Arthur, but it is neither a serious drama nor a pure comedy, so it tries to please everyone and runs the risk of completely pleasing nobody. The animation, while without frills, is serviceable, and the soundtrack was well-received in receiving an Academy Award nomination. However, you probably won't recognize any of the songs, though they are tuneful enough.

Probably the film's biggest artistic success is that its sheer lack of originality led the animators to go to Walt Disney and suggest the studio take another direction with the next feature. Walt, to his credit, listened and agreed, and the result was the magnificent "The Jungle Book," which is well-remembered as a classic while "The Sword in the Stone" is all but forgotten. Interestingly, Director Wolfgang Reitherman also directed that later film with his son again playing the lead, so there is some continuity between the two films despite the huge change in tone.

Not a bad film to watch, if you can find it. Not at the top of most peoples' viewing list, but many people love it to this day, and it really is enjoyable if you don't mind seeing Merlin in Bermuda shorts and sunglasses. 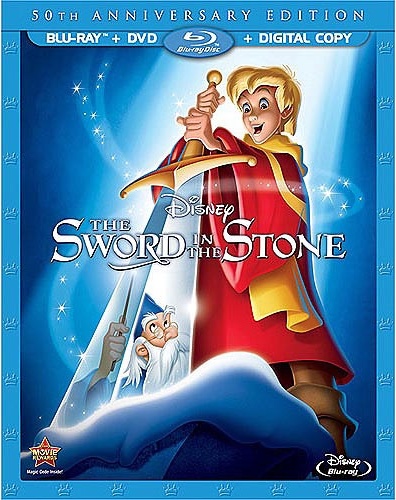 Disney has announced the Blu-Ray version of "The Sword in the Stone" at long last, to commemorate the film's 50th Anniversary. It will come out on August 6, 2013, and include: