Madagascar: Escape 2 Africa - Only Problem Is, Madagascar is Part of Africa 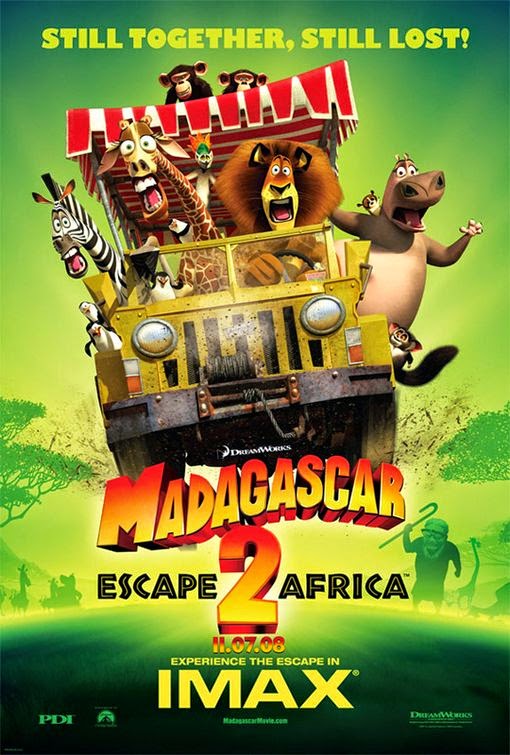 "Madagascar: Escape 2 Africa" (2008), written by Etan Cohen and directed by Eric Darnell and Tom McGrath for DreamWorks, continues the "Madagascar" adventures of Alex the Lion (Ben Stiller), Marty the Zebra (Chris Rock), Melman the Giraffe (David Schwimmer), Gloria the Hippo (Jada Pinkett Smith), King Julien the Lemur (Sacha Baron Cohen) and their friends. If you saw the first film, you recall that Alex, Marty, Melman and Gloria were star attractions in the New York Central Park Zoo until, through a convoluted sequence of events, they wound up castaways in Madagascar (an island off south-east Africa). In this episode, the animals try to get back to New York, and we learn a little bit more about their backgrounds.


First, we learn that Alex was born "Alakay" to Zuba (Bernie Mac). Zuba tried to teach Alakay how to hunt, but all the cub wanted to do was dance. Poachers finally captured him after his rival Makunga (Alex Baldwin) challenged him. After the crate he is shipped in falls into the sea, it floats to New York, where Alex grows up in New York's Central Park Zoo. There, he meets Marty, Melman and Gloria.


Now, it looks as if the animals will be able to return to New York, because they have a repaired plane to fly. They all board the plane, but it runs into trouble and crashes in mainland Africa. Alex reunites with Zuba, Marty joins a herd of zebra who are like him, Melman gains status as a witch doctor, and Gloria is pursued by a hippo named Moto Moto (will.i.am).


The penguins set about repairing the plane again, stealing jeeps from tourists to get spare parts. The other characters, though, run into troubles with their new lives: Alex still has to contend with Makunga, who now defeats and banishes him and his family; Marty starts feeling unappreciated as just an unremarkable part of a herd; Melman starts getting "witch doctor disease;" and Gloria rejects Moto Moto.


The stranded tourists add to their troubles. They build a town, stealing all the animals' water and capturing Alex, who eventually escapes. He returns to the others and challenges Makunga to a fight for leadership.


The film doesn't make a lot of sense, but it is full of laughs, which is the main thing. The breakout stars are the penguins, who will delight the children and have a slightly bigger role than in the original. In that way, they are like Scrat in the "Ice Age" series, particularly "Ice Age: The Meltdown," which he really saved from becoming dull. King Julien also proves highly amusing in his appearances. However, much of the storyline involves adult characters which may leave many children uninterested, though scenes with the baby lion should please them.


A problem with this film is that it attempts to make the characters sympathetic and likeable, rather than just comical. They just want to be loved, isn't that cute? This slows down the comedy, which is the franchise's main draw. In that sense, the character development backfires. In addition, inserting a tired subplot from "The Lion King" may have looked good on paper, but that film did it first and, frankly, better.


Making the main characters "deep" while reserving the comic hijinks for the supporting players works, but not as well as it would have if they forgot about trying to make us love Alex et al.and just kept everybody in the comedy loop. Do we care if Alex has issues? Not really, we care if he is funny. We care A LOT about that.


The saving grace, however, is the animation. It is crisp, punchy and really captures the mood. The soundtrack also is top-notch, with "I Like To Move It" (written by Erick Morillo and Mark Quashie, performed once by will.i.am and another time by Reel 2 Reel) becoming a genuine breakout hit. "Born Free" by John Barry, "Private Dancer" by Mark Knopfler and Barry Manilow's "Copacabana" (written by him with Jack Feldman and Bruce Sussman) also liven things up. It's a hip soundtrack that may be more enjoyable than the film itself.


The jokes are the jokes, if you don't like the current one, another is coming along in a minute. Many of them work, and they are very clever. This film just doesn't seem as funny as the first one, though, maybe because of all the pointless time wasted on trying to make us develop deep feelings for inherently goofy characters.


As a sequel, "Madagascar: Escape to Africa" isn't bad. It just kind of loses its way a bit. Fortunately, it did enough business to merit a sequel (actually, the sequel was planned before this film was even released). It was not a huge box office hit, barely recouping its budget domestically. Overseas ticket sales saved it - this series is warmly received internationally for obvious reasons. "Madagascar 2," as this is commonly known, is amusing enough, but personally I would watch all the "Ice Age" films first.

Check out this music video of the Madagascar animals dancing to "I Like to Move It":