The Rescuers (1977) - One of the Best Original Disney Movies

The Rescuers (1977) - A Forgotten Disney Movie Treasure with Bob Newhart 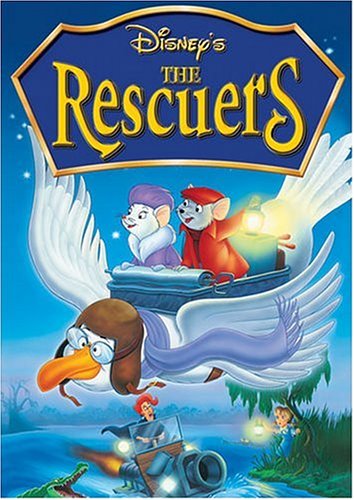 Walt Disney himself did some brainstorming about the idea that ultimately turned into "The Rescuers" (1977), and some of his veteran animators were still around to finish the job. Thus,"The Rescuers" legitimately can be included in the list of original Disney movies that came from Walt himself. Based on a series of novels by Margaret Sharp, "The Rescuers" introduced many original concepts and performed very well at the box office. It led to a rare Disney movie sequel that itself was released as a feature film, "The Rescuers Down Under," and earned an Academy Award nomination (for the song "Someone's Waiting for You"). It was, in fact, the last Oscar nomination for Walt Disney Productions until "The Little Mermaid" came along a dozen years later and began the '90s Disney Renaissance that included the sequel to "The Rescuers." Voiced by popular comedians Bob Newhart, Joe Flynn and Disney movie regulars Pat Buttram and Eva Gabor, and directed by veteran Wolfgang Reitherman along with John Lounsbery and Art Stevens, "The Rescuers" is a fine addition to your Disney movie collection.


A mouse organization within the United Nations in New York, the Rescue Aid Society, receives a note from an orphan, Penny (Michelle Stacy), pleading for her rescue. Hungarian mouse Miss Bianca (Eva Gabor) accepts the case and appoints janitor Bernard (Bob Newhart) to help her. They do some investigating and locate an old cat nearby named Rufus (John McIntire) who knew Penny. Rufus tells them about pawn shop owner Madame Medusa (Geraldine Page), who previously threatened to abduct Penny.

Madame Medusa and her partner, Mr. Snoops (Joe Flynn), are nowhere to be found because they left to try and find Devil's Eye, the world's largest diamond. Apparently, the two mice learn, Mr. Snoops indeed kidnapped Penny and took her to Devil's Bayou in order to try to find the diamond. Miss Bianca and Bernard enlist the aid of Orville the Albatross (Jim Jordan) and Evinrude the dragonfly (James MacDonald) to get them to Devil's Bayou.


Medusa and Mr. Snoops kidnapped Penny to force her to go down a pirate's hole in order to retrieve the diamond. After evading Medusa's pet alligators Brutus and Nero, Miss Bianca and Bernard find Penny, and they devise a plan to set her free. Before they can set the plan in motion, though, Medusa and Snoops send Penny down into the cave to get the diamond, with Miss Bianca and Bernard hiding in her pockets.


They find the Devil's Eye, but when they try to take it, the cave suddenly floods. They grab the diamond and barely make it out, and Medusa then takes the diamond for herself, cutting Snoops out completely. A terrific fight over the diamond then ensues, and after some trickery, Miss Bianca and Bernard manage to imprison Medusa and Snoops.


Anyone who follows comedy knows that Bob Newhart was - and remains to the day of this writing - the master of the verbal tic and the frightened demeanor and slow-burn frustration with the crassest ineptitude by others in the simplest things. Here, he has plenty of material with which to work and chews the scenery with gusto. His Bernard is afraid of flying, afraid of the number 13, and overall just a major pain to all those around him. Newhart himself was flying high at the time of this film, in the midst of his classic '70s television series, and he makes this film hum. He gets ample support from master comedian Joe Flynn (who unfortunately passed away during production)  as the clumsy but non-malevolent Snoops. Other stalwarts of Disney animation voice roles such as Pat Buttram, John Fiedler and George Lindsey round out the cast.


The animation team included many of Walt Disney's old hand for the last time, and also newcomer Don Bluth (who left after this film to create masterpieces such as "The Land Before Time" and "The Secret of NIMH." A real changing of the guard was in the offing, but the veterans from the 1930s were able to crank out one last hit before they handed off their duties to the new generation. They were fussy old men by then, refusing to let anyone interfere with their drawings, but their rabid self-protectiveness paid off in the end.


Computer graphics were still far in the future, but advancements in the xerographic animation process drastically reduced the black outlines that had plagued Disney animation since "One Hundred and One Dalmations." There might have been another connection with that film, as an early idea was to resurrect Cruella de Vil as the villainess, but that idea was given up. Instead, veteran animator Milt Kahl based the drawing of Medusa on his ex-wife.


The film was a huge financial success, the first without Walt Disney's direct guidance, and earned the honor of serving as the inspiration for the first sequel of any Disney animated feature, "The Rescuers Down Under." There is a lot of humor, and not just from Newhart, as Orville is a center of comic relief. There are some scenes that might frighten small children, such as alligators snapping at Medusa, but nothing as dark as, say, what we all know happened in "Bambi."


The music of "The Rescuers" is a high point of this Disney movie, supporting the narrative and earning an Academy Award nomination for "Someone's Waiting for You" by Sammy Fain, Carol Connors and Ayn Robbins (sung by Shelby Flint). The music in "The Rescuers," heavy on the synthesizers, does have a certain '70s vibe to it which either will be off-putting, or have you subconsciously dreaming of bell bottoms and clogs.


The idea of having talking mice as the heroes of "The Rescuers" must seem almost passé today, but it had never been done before in a Disney movie. The use of mice for sympathetic characters later, of course, became almost a standard in animation films, for example in the two Cinderella sequels, "Cinderella II: Dreams Come True" and Cinderella III: A Twist in Time," and in "The Great Mouse Detective." It is easy to forget that somebody had to think up the idea and do it first, and nice to give proper credit when you can. Well, here is the origination of the idea in "The Rescuers."

The Rescuers trailer is below.