"The Rescuers" was a surprise hit, a throwback to the days of "Lady and the Tramp" and "One Hundred and One Dalmations," when the Disney juggernaut could take an unknown story and make it into an "all Disney" movie, complete with Disney villain, Disney heroes, and a warm, fuzzy conclusion. The two leads from "The Rescuers," Bob Newhart and Eva Gabor, return in "The Rescuers Down Under" (1990), directed by Hendel Butoy and Mike Gabriel, as Bernard and Miss Bianca, respectively.

While it did not perform spectacularly at the box office, it has found its audience over the years and has become something of a cult classic. The Disney animators also went to work improving the technology, using the computerized CAPS animation process developed by then-unknown graphics company Pixar for the first time, along with CGI elements in many scenes. Whatever you make think of the overuse of CGI in the years since it does have its place when used properly, so this was a true break-through film.

Spectacular scenes such as Wilbur the albatross flying over Sydney Harbor still look good today, and, in a practice that would later become common but was still new at the time, the Disney animators visited the Australian Outback to refine their visuals. This is one of only three Disney movie sequels (the others being "Fantasia 2000" and "Winnie the Pooh") that are included within the Disney movie canon of animated features and the very first animated sequel to any Disney movie. It also helped solidify the Disney Renaissance which had begun the year before with "The Little Mermaid" and, some would argue, continues to this day. 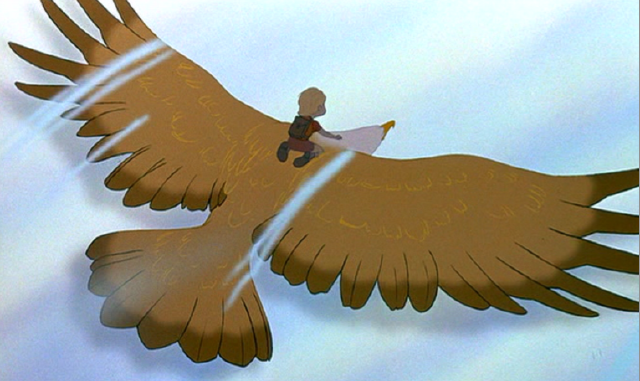 
Bernard and Miss Bianca, the title rescuers from "The Rescuers," are given the mission just as Bernard is preparing to propose marriage to Miss Bianca. They enlist Wilbur the albatross (John Candy), the brother of Orville from "The Rescuers," to fly them Down Under to Australia so that they can help out Cody. There, they meet friendly kangaroo mouse Jake (Tristan Rogers), who serves as their tour guide and also, much to Bernard's annoyance, hits on Miss Bianca. Wilbur has some problems with his back which are "straightened out" at the local mouse hospital.

McLeach, meanwhile, tricks Cody into thinking that someone has shot Marahute, causing the boy to visit the nest with McLeach surreptitiously following. Bernard and Miss Bianca follow in McLeach's giant half-track, where they try to warn Cody, but McLeach arrives and captures the bird, Cody, Jake, and Miss Bianca. Joanna, McLeach's pet goanna (a monitor lizard voiced by Frank Welker), tries to eat the bird's eggs, but Bernard foils that plan by replacing them with similarly-shaped rocks. The rescuers do a lot of rescuing in this Disney movie.

Wilbur, recovered, arrives and, at Bernard's request, sits on the eagle eggs to keep them warm so that they will be all right while Bernard searches for McLeach and the captives. They all wind up at Crocodile Falls, and McLeach intends to dangle Cody over the Falls in order to feed him to them. Bernard, riding a razorback, gets there in time to foil the plan by disabling McLeach's vehicle. Bernard then tricks Joanna into running into McLeach, sending them both down into the crocodile-infested waters.

Cody falls into the water, and Bernard tries to save him but can't. It is up to Marahute, freed by Jake and Miss Bianca, to swoop down and save both Bernard and Cody from going over a waterfall as McLeach has just done. Happy at last, Bernard then returns to his original intention, proposing marriage to Miss Bianca.

The rescuers once again form a nice, tightly bonded team, though they don't appear until the lengthy set-up in Australia has concluded. The Disney villain, McLeach, is fully realized, with a delightfully morbid sense of humor. He even is somewhat believable, unlike many other Disney villains, and you will understand McLeach and the killer that he is as you cheer as he goes over the Falls.

The most damaging thing you can say about this Disney movie aside from debatable matters such as whether the writing by Jim Cox, Karey Kirkpatrick, Byron Simpson and Joe Ranft (based on the Margaret Sharp characters) properly uses the characters, is that it did not make a lot of money upon the first release (though, like all Disney animated Features, it undoubtedly has earned the Disney team money over time with re-releases and home video sales). The story is that the film did not perform as expected over its initial weekend of release (facing stiff competition indeed from "Home Alone"), causing Disney movie boss Jeffrey Katzenberg to panic and pull all of "The Rescuers Down Under" advertising. The trend of Australian-based films had bypassed "The Rescuers Down Under" by a couple of years, so what may have seemed like a good idea at the time, wasn't at the time of release. Those things, though, don't make it a bad Disney movie, just a Disney movie that had bad timing. Fortunately, Disney markets its animated films in terms of decades, not weekends, so "The Rescuers Down Under" has gone on to have a wonderful post-release life anyway.

The 35th Anniversary Blu ray Edition has some fun special features. Two songs, "Peoplitis" and sing-along "Someone's Waiting for You" make the cut this time. For Disney devotees who are into mice, there is the Silly Symphony short "The Three Blind Mouseketeers." An obligatory "The Making of The Rescuers Down Under" and "The Water Birds Disney True Life Adventure" allow you to spend some more time with Eva and her "dahlings." The 35th Anniversary Edition of The Rescuers and The Rescuers Down Under on Blu-ray has three discs full of material, with two unfortunately forgotten films and more than enough bonus material in one package to satisfy most fans.