Cinderella III: A Twist in Time (2007): A Disney Movie with a Neat New Cinderella Fairytale

Cinderella III: A Twist in Time: Lady Tremaine Strikes Back

DisneyToon Studios' "Cinderella III: A Twist in Time" (2007), directed by Frank Nissen, thus became the second Disney movie sequel to the classic fairy tale "Cinderella," and fans generally like it much better than the first Cinderella sequel and similar Disney movies.  Many purists still think it reflects poorly on the 1950 Disney movie classic "Cinderella," but you can't please everyone.


Lady Tremaine uses the wand to turn time back to the day before the Grand Duke (Rob Paulsen) slipped the glass slipper onto Cinderella's foot. Cinderella is locked in the attic with Gus and Jaq, and Lucifer (Frank Welker) is guarding the key.


Prince Charming can tell that Anastasia is not the true Cinderella with whom he danced, but Lady Tremaine once again uses the wand to make him believe that she is the right girl for him. Cinderella figures out that Lady Tremaine has the wand, and Cinderella disguises herself as a maid in order to steal back the wand. Lady Tremaine catches her, but the mice get away with the magic wand.

Prince Charming is on the verge of recognizing Cinderella, but Lady Tremaine orders her shipped out of the kingdom at once. The mice then intervene and tell Prince Charming what has happened, and he stops the ship from leaving, finds Cinderella, and asks her to marry him.

The King (Andre Stojka) tries to arrest Lady Tremaine, but she escapes using the wand. She transforms Anastasia into a carbon copy of Cinderella, then transports Cinderella and the mice into a twisted pumpkin carriage driven by Lucifer in human form. The mice and Cinderella manage to escape, leaving Lucifer in the woods.

Cinderella recovers the magic wand and restores the Fairy Godmother. Anastasia is remorseful, but the relieved King understands that she has a good heart, so he does not punish her. Rather than return to their own time, Prince Charming and Cinderella decide to stay in this version of reality and live out their lives in peace.

A great deal more care was taken with this Disney movie sequel than with "Cinderella II." The live-action sequences were filmed for aid in creating the animation, and the Disney movie animators put in a lot of time and effort, so much so that this almost has the quality of classic Disney movies like the original "Cinderella."

"Cinderella III" has the unique distinction of being the last Disney movie to be hand-animated until Disney made a return to that style, as the DisneyToons Studio was shut down after this production (and that studio pointedly is thanked in the credits). Senior animator Ian Harrowell managed to get his people to make a fairy tale Cinderella who is quite expressive, which helps give this Disney movie life that some other Disney movies have lacked.

There is a noticeable step up in the overall quality of this Disney movie from the previous Disney sequel, and the songs by Alan Zachary and Michael Weiner are worthy of a Disney movie princess production. Hayden Panettiere performed "I Still Believe" for the end credits, which was a bit unusual for a Disney movie centering around a classic character, but it works well. Jennifer Hale again does a fine job as the princess, and if you think her voice sounds familiar, it is because she also is the Queen of video game voice-overs. In fact, she's earned a spot in the Guinness Book of World Records due to all her voice roles in video games. Jennifer still provides minor voices in Disney productions and is one of the most employed voice actresses in Hollywood.

This Disney movie storyline has a lot in common with the subsequent DreamWorks hit "Shrek Forever After," and also with a musical that runs on the Disney Cruise Line. That just goes to show how creativity can be lacking in Hollywood, even in Disney and DreamWorks movies, when film-makers don't have centuries-old fairy tale storylines to use. Much easier to play it safe with a proven product. However, there still is a lot to like about this film, especially if you haven't seen those other productions.

While the motivations of some of these Disney movie characters might be is questionable, there is no question that evil step-mother gets her moments in this film and a well-deserved fate. There is nothing like a good Disney movie villainess who gets her comeuppance, and the outlandish lengths to which Lady Tremaine goes in order to secure the throne for her daughter makes for an amusing tale of misplaced perseverance.

The Disney movie characters become much more human in this sequel. Prince Charming gets a chance to fight for his true lady love, and the king has an opportunity to reflect on his own lost love. Fairy tale Cinderella can no longer rely on magic to achieve her ends but must fight against it, proving her mettle. If you like mice as heroes, try "The Rescuers" as well. 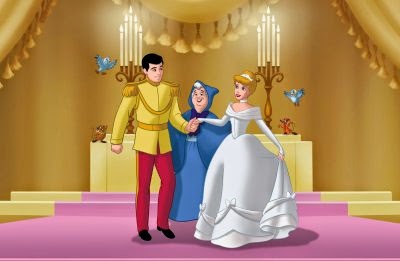 "Cinderella III: A Twist in Time" does not degrade or lessen the Disney movie characters in any way, but treats them with proper reverence while giving them new life and dimensions. It delivers many heartwarming lessons in an entertaining fashion that get your rooting for and against the classic Disney movie characters, with a delicious "just desserts" for Lady Tremaine and Drizella. If you enjoy the characters from the original fairy tale "Cinderella," this Disney movie may well become your guilty pleasure.