"The Little Mermaid: Ariel's Beginning" by Walt Disney Studios Home Entertainment often is sold as part of a set with the other two films, so if you buy it that way, the order of the three Disney movies becomes more comprehensible.

King Triton and Queen Athena (Lorelei Hill Butters and Andrea Robertson) have seven young daughters in their undersea kingdom of Atlantica. Ariel (Jodi Benson) is the youngest and most precocious daughter. Everybody loves music, and Triton gives his dear wife Athena a music box. While enjoying it, she is crushed to death by a pirate ship. After that, Triton cannot bear the thought of music and banishes it from the kingdom.


A new governess, Marina Del Rey (Sally Field), is selected to raise the girls. She and her assistant, Benjamin (Jeff Bennett), look after them diligently, though Marina secretly longs to be Triton's Chief of Staff instead. Ariel, in particular, resents not being able to enjoy music and seeks it out whenever she can.

Ariel meets Flounder (Parker Goris), who also enjoys music. He leads her to an underwater music club, the "Catfish Club." To her surprise, she sees the king's chief adviser, Sebastian the crab (Samuel F. Wright), performing. Ariel the little mermaid is delighted to find a place to enjoy her passion. Despite the others' fear that she will reveal their secret, they allow her to join the club.

Excited, Ariel later tells her sisters about the club. The next night, they all go to visit. Marina finds out about it and sees her opportunity. She informs King Triton, who throws Sebastian, Flounder and the band in jail and grounds the girls. He promotes Marina to be his chief advisor, the position she always wanted.

Ariel confronts her father about the ban on music, but his mind is so made up that he won't even talk about it. That night, Ariel decides to run away. She frees Sebastian and the others from jail and they all leave Atlantica. Sebastian leads them to Athena's old music box, and this inspires her to return the music box to Triton in hopes it will soften his heart about music.

Marina, though, appears and blocks their return path. She worries that if Triton lifts the ban on music, he will release Sebastian, restore him to his position, and she will be demoted. She and her minions (electric eels) fight Ariel, Sebastian and the others in a final showdown. Ariel gets knocked out, but Triton happens by and sees what is going on. The entire incident makes him think long and hard about the whole music issue.

Only a few of the voice actors from the first two films were able to return for this concluding chapter, most noticeably the voices of Ariel and Sebastian. Sally Field signs on and does a fine job voicing the tale's villainess, singing "Just One Mistake" a couple of times.

The songs by Jeanine Tesori, Raymond Bell, Steven Samuel, Rafael de Leon, and Gabriel Oller are a step up from the previous film in the series, and "Part of Your World" by the original film's composers Howard Ashman and Alan Menken also is used. While some people are not impressed by the songs' quality (and almost anything would suffer by being compared to the showstoppers in "The Little Mermaid"), they are performed competently and bring an added dimension to the production.

Another big draw for "The Little Mermaid 3" (as it is invariably known) is the high-quality (for direct to video) animation. While the second film in the series had relatively simple animation that seemed cartoonish at times, this film keeps the use of computer graphics to a minimum. It appears that new character models were made that closely resemble the originals but in some ways enhance them. 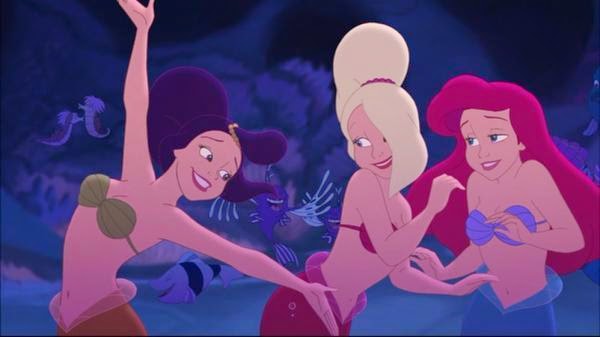 Some might even think that Ariel is at her prettiest in this film. There is a lush look to this film that some may consider equal to the classic original episode, and is certainly a step up from "The Little Mermaid II: Back to the Sea." There is a touch of modern 3D animation techniques that give the undersea world a welcome sense of depth.

Under new director Peggy Holmes, a dancer by training, there is very little conflict in the film, which suffers as a result. Marina is not much of a villainess, even compared to the rather pale Morgana of "Little Mermaids II." However, Sally Field voices her with gusto, making her seem crazy and cruel without being particularly evil. It is kind of odd in a continuity sense that we don't see anything of Marina in the concluding chapter of the trilogy, but that is one of the drawbacks of filming (and writing) stories out of sequence.

Marina Del Rey's ultimate fate is left unclear, though we are left with the impression that she will reform and return to the straight and narrow. In any event, her character never really makes sense, since becoming thuggish simply to keep Ariel and the others from talking to Triton seems a bit of a stretch. There are a lot of things that are forgivable in a Disney movie, but a weak villain isn't one of them. Holmes does do a nice job with the dancing sequences, though.

The direct-to-video release went quite well. Released on August 26, 2008, "The Little Mermaid: Ariel's Beginning" topped the DVD sales chart on August 31, 2008, selling 980,237 units for $15,673,990, easily topping runner-up "What Happens in Vegas" (also in its first week of release) at 512,664 units. "Ariel's Beginnings" fell to second place the following week with sales of 359,113 units, and ultimately wound up earning $41,224,436 in sales as of May 2014 on well over 2 million DVDs sold. That has to be considered a profitable return for the studio, especially considering that it does not include sales from compilation packages sold with the other two films in the series - which sales must be immense.

"The Little Mermaid: Ariel's Beginning" is essential for any fan of Ariel the little mermaid. This is the only time we get to see Ariel's mother, who it turns out looks exactly like Ariel the little mermaid herself, so it is worth watching by fans for that reason alone. If you like the "Little Mermaid" idea, you may as well get the complete set and start out by watching this film. This isn't really of the same quality as "The Little Mermaid" itself, but it is enjoyable for those who just can't get enough of the little mermaid Ariel. Even if you aren't a die-hard fan, there is a lot to like about this charming prequel that will warm you up for the main event that follows it.