There is a lot of animation and many images being generated by the Rosetta Probe and the Philae Lander, so I have collected the details about its landing here for convenience.

The European Space Agency reported that the Philae lander from the Rosetta probe that we have been following the past few months successfully landed on the surface of comet 67P/Churyumov–Gerasimenko. The above photo is what it would have looked like to someone on the surface as it arrived. 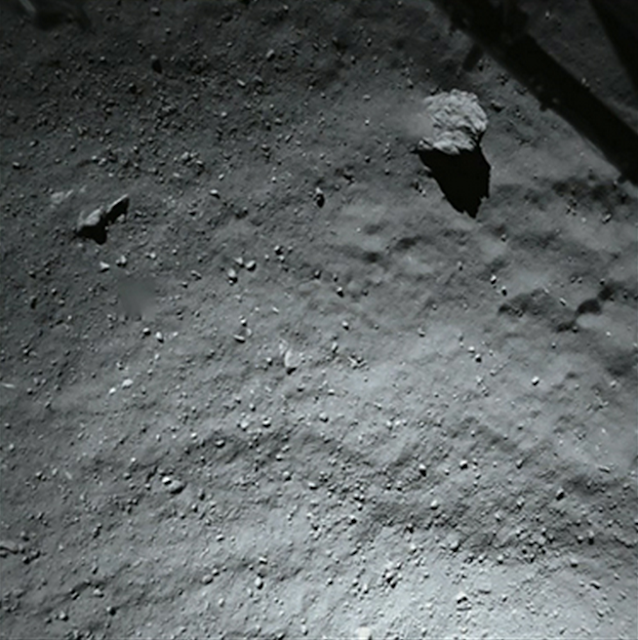 Above is a picture that was taken from the lander itself as it approached the surface. The photo is from 40 meters above the surface.

It appears the landing was a complete cock-up. Not only did the lander touch down about a mile from where it should have, but it apparently wound up on its side, with only two of its three legs touching the surface. That may be why the solar panels are having trouble, with only one operational at all, and that one receiving less than 2 hours of light during the 12 hour day. That is insufficient to power the lander to perform its scientific duties, though there may still be ways to use it anyway for some purposes. Of course, if it is on its side, there won't be much it can do anyway.

Below, the red area shows where the lander was headed, and the blue area shows where it wound up due to bouncing about. Naturally, there can't be much gravity on the comet so the lander wouldn't stay put until it was good and ready. Technically, it should be tethered to the comet because of the lack of gravity. Note the cliff near the blue triangle. 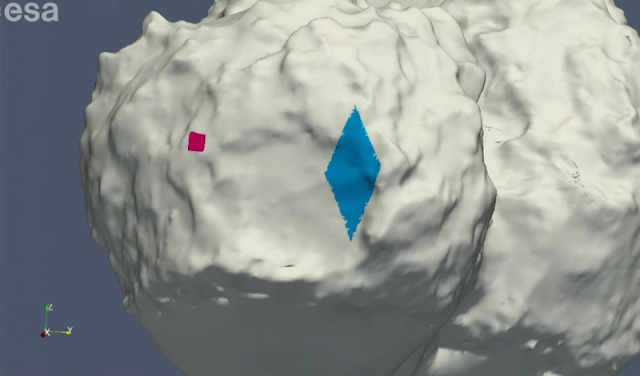 The ESA says that the lander now has some problems with power generation. This is because apparently there is a cliff over on the left of the animation that is barely in the frame in the lower left-hand corner. This cliff puts the lander into the shade. Without lots of sunlight, the Philae Lander will not be able to do much as the batteries do not hold much of a charge

Below are excerpts from the press conference.


Below is a first look - a composite of six photos - showing what the surface of the come looks like.

Below is an animation from Rosetta of the lander descending.

In the following frames, you can't really see the lander, but NASA or ESA or whoever is doing this research assures us that there is evidence of Philae bouncing and then apparently coming to rest in these shots.

Finally, here is an ESA animation of the whole landing process as they would like it to have gone. Apparently, they did get some work done, including drilling a hole but only for the 60-hours of time that was in the battery.

"Published on Nov 12, 2014
Animation video of Rosetta Mission for landing on a comet: Philae Lander.
Rosetta’s deployment of Philae to land on Comet 67P/Churyumov–Gerasimenko.

The animation begins with Philae still on Rosetta, which will come to within about 22.5 km of the center of the nucleus to release the lander on 12 November 2014.

The animation then shows Philae being ejected by Rosetta and deploying its own three legs and follows the lander’s descent until it reaches the target site on the comet about seven hours later. The animation is speeded up, but the comet rotation is true: in the time it takes for Philae to descend, the nucleus has rotated by more than 180º (the comet’s rotation period is 12.4 hours).

The final steps of Philae’s descent towards the comet are shown as seen by a hypothetical observer close to the landing site on the comet.

Finally, the animation shows Philae landing on the comet. Because of the comet’s extremely low gravity, the landing gear will absorb the small forces of landing while ice screws in the probe’s feet and a harpoon system will lock the probe to the surface. At the same time, a thruster on top of the lander will push it down to counteract the impulse of the harpoon imparted in the opposite direction. Once it is anchored to the comet, the Philae Lander will begin its primary science mission, based on its 64-hour initial battery lifetime. The animation shows a number of science instruments in action on the surface.

Acknowledgment: The background image of the sequence showing Philae closing in on the landing site was taken by Rosetta’s OSIRIS narrow-angle camera (ESA/Rosetta/MPS for OSIRIS Team MPS/UPD/LAM/IAA/SSO/INTA/UPM/DASP/IDA) on 14 September 2014 from a distance of about 30 km.

Philae was provided by a consortium led by DLR, MPS, CNES and ASI.

Acknowledgment: The background image of the sequence showing Philae closing in on the landing site was taken by Rosetta’s OSIRIS narrow-angle camera (ESA/Rosetta/MPS for OSIRIS Team MPS/UPD/LAM/IAA/SSO/INTA/UPM/DASP/IDA) on 14 September 2014 from a distance of about 30 km.

Philae was provided by a consortium led by DLR, MPS, CNES and ASI.
Video and images by ESA and NASA."