Directed by Rich Moore, "Wreck-It Ralph" (2012) combines the two fads in entertainment: animation and video games. Walt Disney Animation Studios can put these films out in its sleep, and this is the 52nd entry in its animated feature series, which began way back in 1937 with "Snow White and the Seven Dwarfs."  If Disney, especially with the help of head guru John Lassetter, doesn't know how to make a quality animation film by now, it is in deep trouble - but this is a fine film, whether from Disney or anyone else.  As a bonus, it is in glorious 3D (though you can see it in 2D as well), which really works in the arcade-game setting.

Litwak's arcade is a normal place during the day, but at night it gets even more exciting.  That is when the video game characters are free to escape their confines within their respective games and visit other games.  One particular character in the game "Fix-It Felix, Jr." is Wreck-It Ralph (John C. Reilly). Ralph wants to do more than just visit another game: he wants to leave behind his own game character, which forces him to be the villain, behind and become a hero instead.

Ralph's first step to accomplish this goal is to visit "Hero's Duty," which is a military first-person shooter pretty obviously modeled after "Call of Duty."  In it, the game's winner receives a medal.  Rather than win the proper way on merit, though, Ralph can't help himself from being bad.  He surreptitiously steals the medal and thereby hatches a Cy-Bug, which clings to him as he tries to escape.  Meanwhile, Felix (Jack McBrayer), the hero of Ralph's own game, needs to find him before Mr. Litwak shuts their game down as malfunctioning, so he starts searching.

Ralph winds up in another game, "Sugar Rush," where he meets Vanellope von Schweetz (Sarah Silverman), who quickly steals his medal.  Felix, meanwhile, learns from Calhoun, the hero in "Hero's Duty" (Jane Lynch), that Cy-Bugs will destroy any game that they enter. That makes it essential that they find Ralph before he destroys the entire arcade in his wanderings.


Ralph eventually learns the danger he has placed everyone in and finds Felix and Vanellope.  Together, they battle a swarm of Cy-Bugs that have hatched.  Ralph has to come up with a plan to attract all the bugs that he has unleashed to one place so that they can be killed before they take over all the games.


The plot is fairly complicated for a Disney film, but it is easy to follow as the movie proceeds.  The special effects are top-notch, and there is a lot of humor floating around (as you would expect in anything featuring Sarah Silverman).  There is an unusual amount of character development for an animated film aimed at kids, and it all serves a good purpose in showing how nothing is beyond our control to improve ourselves.

The people who will most appreciate this film, though, are fans of old video games. There are cameo appearances by characters from a number of classic video games: Bowser from the "Mario" games; Doctor Eggman from "Sonic the Hedgehog; Pac-Man and several other characters from "Pac-Man"; Q'bert; and many others.  Oblique references are made to other games, such as "Final Fantasy."  You can have fun with this film just by looking for all the references to games you may have forgotten or only played a few times back in the day, or (admit it) obsessively raced home from school to fire up and start playing.

The voice actors are all top-notch, with John C. Reilly showing that he at least is capable of being a leading man in the video game universe. He has a naturally world-weary inflection that perfectly suits a bored video game character. Sarah Silverman is at her annoying best, and her fans will know what that means. Jane Lynch is gruff but amusing in her own over-the-top way as the star of her own action game. 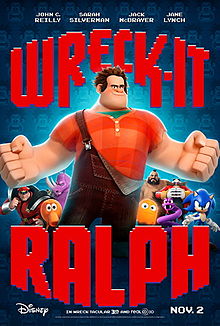 The characters were all likable, with neuroses and sensitivity completely at odds with their video game personas. There is a Rihanna song thrown in for those who are fans. Sarah Silverman obviously is a little out of place playing a little girl, but she pulls it off nicely. Jack McBrayer all but steals the picture as bashful Felix.

The real draw, though, is the animation, which is stellar. Each game has its own visual style which matches its theme: the shooter game is realistic, the racing game is very colorful, and so on. Watching this is almost like opening a textbook and examining how color and theme combine to create the atmosphere of a given game. It's fun for those who remember the old Nintendo and arcade video games from the dawn of the computer age to see how well the animators created new takes on very old themes.

The energetic score by Henry Jackman is perfect for a film about fast-paced video games and mixes electronic and traditional instruments seamlessly. Just like in a video game, the music complements the action and helps keep the viewer focused. As of February 2013, "Wreck-It Ralph" has grossed over $400 million, making it Disney's biggest success at least since "Lilo & Stich." Of course, 'Wreck-It Ralph" still falls short of the grosses from the truly massive franchises such as "Shrek" and "Toy Story," or even ones like "Madagascar 3: Europe's Most Wanted," but you have to be realistic about what is possible.

Certainly, Disney has to be happy with the performance of "Wreck-It Ralph." It was a long, hard decade for Disney, brightened only by the 2006 merger with Pixar and Pixar's own continued success. Many make the argument that "Wreck-It Ralph," in fact, is more of a Pixar film than a Disney movie, and it is difficult to argue with that. The Flashy graphics, lack of "moral lessons to be learned" and the focus on simply entertaining rather than trying to create some kind of classic rendition of a well-known fairy tale all mark "Wreck-It Ralph" as having the Pixar imprint. Be that as it may, "Wreck-It Ralph" bears the Disney imprint and is the 52nd feature film in the Disney Animated Classics series.

If there is one caution, it is that the humor in "Wreck-It Ralph" occasionally descends into crudeness. While it won't do more than perhaps annoy (or more likely amuse) adults, the raw jokes might be a little much for some parents concerned about what their children hear. Regardless, the gags are very funny if taken in the right spirit.

"Wreck-It Ralph" is one of Disney's better recent offerings and a worthy addition to their library.  It isn't as deep some of their older films and has an air of superficiality throughout, but it should keep you entertained.