Shrek: Meet the Friendliest Ogre of Far Far Away

This is an awesome animated film, directed by Andrew Adamson and Vicky Jenson, that began yet another smash franchise for Mike Myers. A green ogre called Shrek (Mike Meyers) discovers his swamp has been overrun with all sorts of fairytale creatures by the scheming Lord Farquaad (John Lithgow). This sends Shrek out, with a very loud donkey by his side, to convince Farquaad to return his swamp to the way it was.

Farquaad makes a deal: if Shrek goes on a mission for him, Farquaad will help Shrek with his problem. Lord Farquaad wants to become the King, so he sends Shrek to rescue Princess Fiona (Cameron Diaz), who is waiting for her one true love, and whom Farquaad intends to marry to become King. But once Shrek and the donkey start back with Fiona, it becomes apparent that not only does Shrek like Fiona, but Fiona may like Shrek, too. 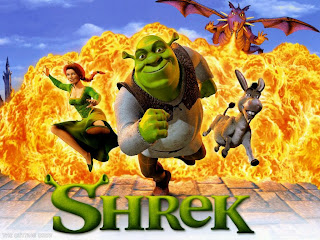 "Shrek" (2001) is a very comical film that has intense animation. It took almost five years to complete this film because of the precision used on the graphics. While some still prefer the old-style hand-drawn Disney style of animation, this film is cutting edge. It is a most excellent choice for young and old alike.

Eddie Murphy is a standout as the abrasive donkey. Mike Myers, though, gets in most of the catch-phrases associated with the film ("What is he compensating for?") as he embarks on his mission to save the fair princess.

Director Mike Adamson keeps the story wholesome and heartwarming. In a way, it is a throwback, with references to "Snow White and the Seven Dwarfs" and the inevitable lonely princess looking for love. The soundtrack is outstanding and is a must-buy.

One common complaint about this film is that there is too much violence. If you are worried about that, you might want to preview the movie first before letting your toddler view it. But anyone above the age of, say, five should have no problem at all. Most people are OK with the relatively mild aggressiveness shown.

There are some plot holes, but younger viewers are unlikely to notice. They will appreciate the fart jokes and the like - the film clearly is geared toward the young, though adults who suspend their belief will enjoy it as well. Mike Myers and Eddie Murphy carry the film, and it is one that you should feel comfortable with. It is tough to find anyone who strongly dislikes Shrek.

In addition, this is a great film to start a child on because there are several sequels which are basically just variations on the same theme. Once your child (or you, after he/she plays it 100 times, as they tend to do) tires of this one, he or she will be amused all over again with "new" stories. You might want to consider buying the box set as a nice gift. And don't forget 2011's "Puss In Boots," the delightful feature film focusing on Shrek's eventual comrade (see picture above).