A look at "Kirby Buckets" on Disney XD

A look at "Kirby Buckets" on Disney XD. This show has not gotten a lot of buzz in the media - at least in the places I frequent - but it promises to be an interesting series for the younger crowd. It combines live-action and animation, which is hot right now (and goes way, way back in film history, for instance in Gene Kelly's "An American in Paris."). "Who Framed Roger Rabbitt" is a somewhat more recent example (though it actually is closer in time to the Gene Kelly musical than to now).

"Kirby Buckets" is the name of the show. It will begin appearing on the Disney XD channel on Oct. 20 at 8 p.m. ET/PT. It is primarily a live-action show about young Kirby Buckets, who wants to be an animator. Kirby's intense passion for animation causes his creations to come alive.

It's not a particularly original idea, but everything will depend upon the execution and whether the younger set finds the characters appealing. With Disney's track record, odds are that they will.

A major hazard for this show is that its young stars could begin shooting up in height and developing lower voices at any minute. Thus, this show will probably last at most for a few seasons before the stars become unrecognizable (like the kid on Disney's ABC primetime show, "Once Upon a Time," is doing).

The show is produced by Titmouse Animation (whose head, Chris Prynoski, did 'Beavis and Butt-head' for MTV, and the characters appear somewhat stylistically similar to those). Everything is approved by Disney, so there is no edgy stuff in this show. The Executive producer is Kristopher Brown. There will be about three minutes of animation per episode, with 20 episodes for the first season. 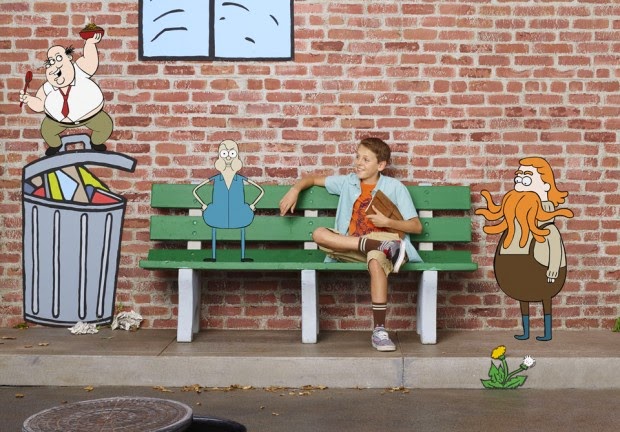 Published on Oct 17, 2014 A scene from Disney XD’s new series Kirby Buckets, about an aspiring young animator whose ideas come to life for the viewer via animation by Titmouse. The show premieres Oct. 20, 2014, at 8 p.m. ET/PT on Disney XD. Clip copyright 2014 Disney; used with permission.