Craco by Hauschka from Tobias Stretch on Vimeo.

I don't know the genesis of this project, whether the intent was to create a music video or simply orchestrate a visual set-piece that needed background music. It doesn't really matter, but it actually is kind of cool that it is unclear. When artistic things are too obvious, they lose a little mystery.

Tobias Stretch has been featured on here before for a Radiohead music video that he did some time ago. It was kind of weird, but that's cool; if everything were Disney cookie-cutter we'd be worse off. This new creative effort is called "Craco," and involves a lot of wavy trees.

All right, they're not trees, but they look like trees, sort of. I'm not trying to be glib or facetious, that literally is what it is - a sequence of wavy tree-like thingamabobs. Or at least they look like trees, they may be sculptures or may actually be people in costumes that may be made out of cloth or clay or something else like that, with the people inside doing crazy wavy things. I couldn't tell you, it is "movie magic."

The technique may be proprietary for all I know. Beyond the wavy tree-people, I like the wavy effect in the sky, which seems to pulse as though the sky itself were breathing. The effect is quite mesmerizing, as the figures mingle in anthropomorphic fashion in the twilight beneath the wavy horizon of, I suppose, Craco.

Hey, there aren't any Cliff's Notes to these animations!

It is all set to some very soothing background piano music by Hauschka, with a colorful ambiance and vivid sky as background that disguises the fact that the action takes place in some sort of dreary industrial park. If it is the Craco that I assume it is, then it is an abandoned city in southern Italy. The people left over the years because the site became unsafe, the last ones leaving in 1980. That would explain the somewhat modern infrastructure overgrown with underbrush, with much of the action taking place on a long-abandoned train platform.

The town is a favorite of film productions, including scenes from "Quantum of Solace." It is a very romantic setting, a tranquil spot devoid of any signs of active human habitation, a ghost town in the classic sense.

Assuming that all my assumptions are correct, this is an allegory, a look inside the essence of the ghost town of Craco, Italy. The environs are populated only by haunting figures that have, like their surrounding vestiges of civilization, become overgrown and formless after years of abandonment, slowly fading back into their natural state as the faint memories of society recede. The spectral figures remain after the people have gone, incorporeal but still seeking human fulfillment as they gradually fade away, facing eternity with only the solace of each other.

It is reminiscent of the human condition as a whole, as people grow older, losing the sharpness of their own features and facing the inevitable end with only their closest companions to accompany them. It is the death of a city as a representative of the death of us all.

But that could all be pish-posh, too. You can interpret it any way that you like. Read into whatever you see, not what I see. 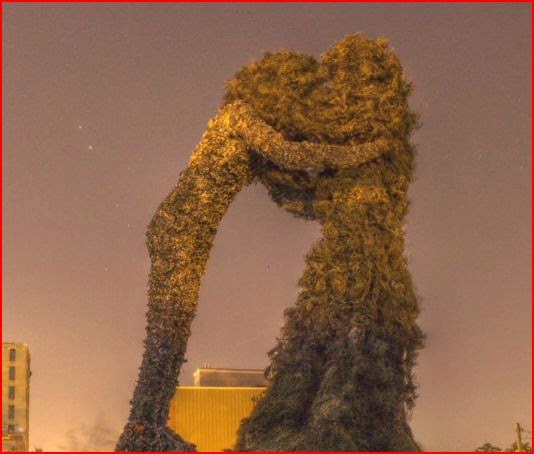