"Beauty and the Beast" (1991) is a classic, but its creation followed a long and winding path. Walt Disney, of course, for all intents and purposes invented feature film animation with the 1937 Disney movie classic "Snow White and the Seven Dwarfs," and he had been working on shorts for 15 years prior to that epochal film. "Snow White," with its lush technicolor and memorable songs, was an island of delight in a sea of black-and-white melodramas from other studios, and the public was hungry for more. 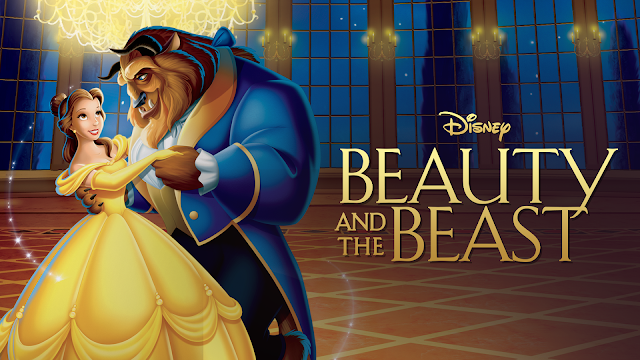 "Snow White" ushered in what is known as the "Golden Age" of animated Disney movies, which lasted through the sentimental "Dumbo" and tragic "Bambi." Walt Disney considered making a version of "Beauty and the Beast" at that point, but he ran out of time.

World War II disrupted everything, and while Disney movies got back on track in 1950 with "Cinderella" and the subsequent "Alice in Wonderland" and "Peter Pan," times were changing fast and lavish animated musicals (and musicals in general) were going out of style. Walt Disney Pictures then lost its way after Walt's death in 1966 and retreated to non-animated films starring kid-friendly actors like Don Knotts and Tim Conway, with middling success.

Nothing wrong with that, but a lot of good opportunities to advance the art of Disney movie animation were lost in those days.

All that changed in the late 1980s. Disney announced in late 1986 that they were finally working up a version of "Beauty and the Beast," though not much happened for a while. Work shifted into high gear in 1989 with the astonishing success of "The Little Mermaid," which ushered in what is known today as the "Disney Renaissance" and showed renewed public hunger for classic fairytales. Finally, fifty years after first contemplated, "Beauty and the Beast" (1991), directed in heroic fashion by Gary Trousdale and Kirk Wise, appeared. It and marked Disney's attempt to build on the "Mermaid" bandwagon and rekindle Disney's past glory. Did it work? It worked gloriously! 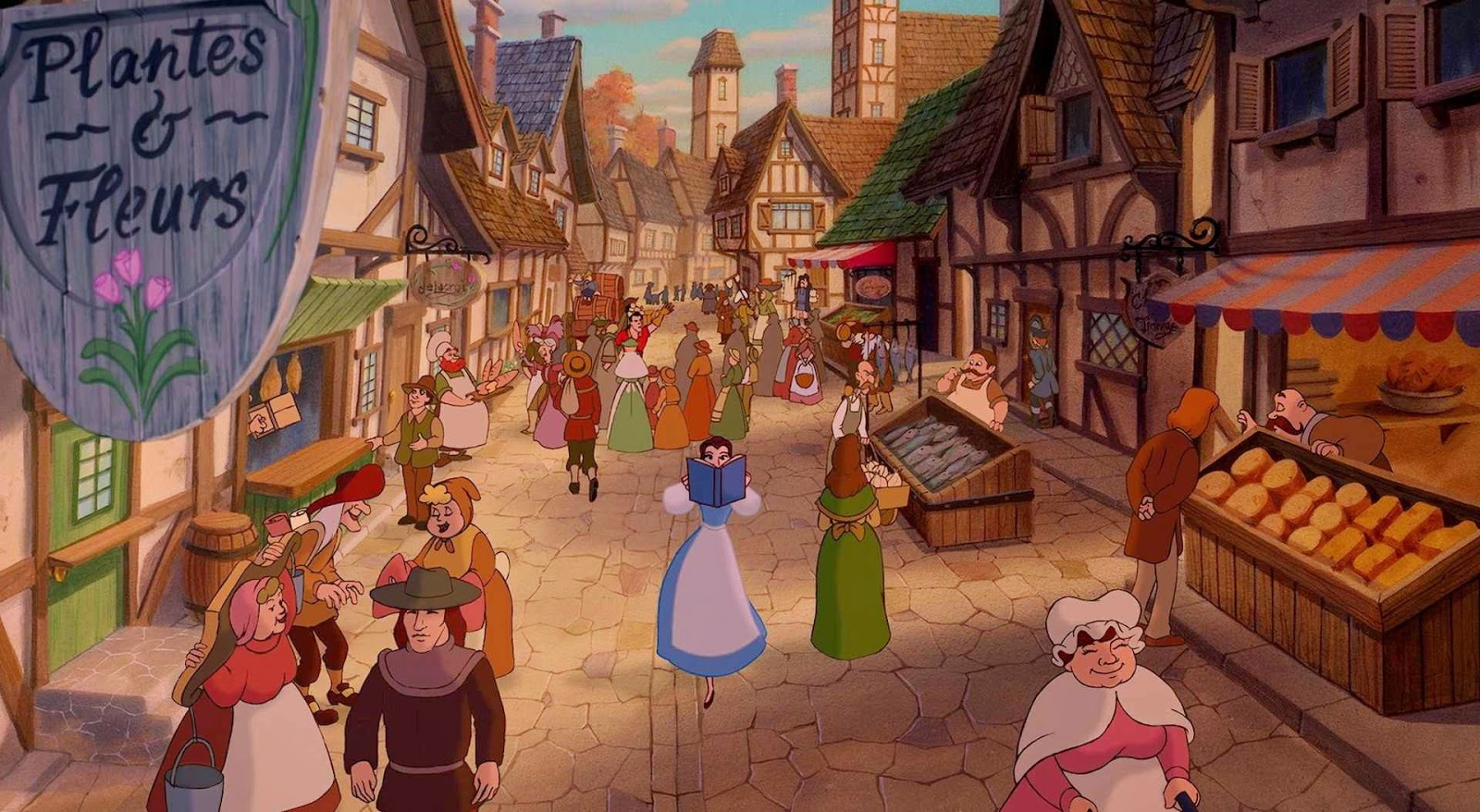 There had been other recent stirrings in the animation field, such as with 1988's "Akira" and "The Land Before Time," which focused attention on new well-crafted animation films. Disney's own "The Little Mermaid" a year later had gotten the ball rolling, but there had been false starts before. "Beauty and the Beast" cemented the Disney movie revival that lasted through to 1999's "Tarzan." "Beauty and the Beast" came out in the days before massive computer-generated graphics, so this is a traditional hand-drawn film that bears the standard Disney movie mark of quality. As usual with a classic Disney movie product, it involves a love-lorn girl looking for her prince.

And "Beauty and the Beast" is indeed a classic tale. "Beauty and the Beast" required 12 (!) writing credits to refine a story that is well-known and established, including such later heavy hitters as Joe Ranft and Brenda Chapman, but at heart, it remains a simple tale about a strong, plucky girl who certainly is no victim. Belle (Paige O'Hara) is a lovelorn girl who is dissatisfied with life in a small provincial French town with few opportunities for true love and wants to do something about it. She is hit on by Gaston (Richard White), a conceited local, but isn't taken in by his smarmy charm despite the fact that everybody else in town is.

Another potential suitor lurks nearby, but nobody even realizes he is there. The Beast (Robby Benson) is a prince who was placed under a witch's spell because he callously turned her away from a night's rest in his castle. He has the appearance of a beast, and his servants became household items. The enchantress was not without heart, though, and gave him a rose which would bloom until his 21st birthday, by which time he must somehow find true love or the spell would become permanent, and also a magic mirror which shows future events. The Beast stays to himself out of shame, but one day Belle's father Maurice (Rex Everhart) is chased by wolves and stumbles upon Beast's castle. His wrong turn eventually brings Belle and the Beast together.


The Beast locks Maurice up for trespassing, but his horse leads Belle back to the castle. She offers to take Maurice's place, and the Beast agrees. He leaves and tries to interest Gaston and others in what has happened, but they don't believe him. The Beast asks Belle to dine, but she refuses. Lumière (Jerry Orbach), a servant who was transformed by the witch into a candelabra, feeds Belle anyway against the Beast's orders, and Cogsworth (David Ogden Stiers), now a clock, takes Belle on a tour.


Belle meets Mrs. Potts (Angela Lansbury), now a teapot, and on the tour finds the rose in the Beast's private section of the castle. The Beast, humiliated, chases Belle away and she is attacked outside by wolves. The Beast saves her but is injured himself, so Belle tends to his wounds. The Beast is gratified and grants Belle access to the castle. Gradually, the Belle and the Beast learn more about each other and become friends.


They share a romantic dinner, then Belle tells the Beast that she misses Maurice, who has been committed to an insane asylum by Gaston until Belle agrees to his proposal. The Beast lets Belle use his magic mirror, and in it she sees her father dying in the woods in an attempt to rescue her. The Beast lets Belle go to try and save her father, giving her the mirror, and then confides in Cogsworth that he loves Belle.


Belle rescues her father, using the magic mirror to prove that Maurice is sane and was telling the truth. Gaston, infuriated that Belle is falling in love with the Beast, incites a riot among the townspeople against the Beast, lying to them that the Beast is a danger and must be killed. The mob heads to the castle, with Belle locked away with Maurice in Gaston's basement. Chip (Bradley Michael Pierce), one of the Beast's servants who was transformed into a teacup, then reveals that he impishly stowed away in Belle's baggage and frees Belle and her father.

The villagers storm the castle, and Gaston searches out the Beast to slay him. While the Beast at first feels that fighting is pointless as he is doomed, the sight of Belle returning inspires the Beast, and he finally fights back against Gaston. The Beast prevails, but Gaston proves his true treachery when he refuses to accept defeat, causing tragedy but also renewal for himself and the Beast.

"Beauty and the Beast' was put together in just two years, which is very little time for animated features that usually take five or more years. Teams in Glendale, California and Lake Buena Vista, Florida (Disneyworld) worked on the animation, using the Pixar CAPS program of computerized graphics first tried out on "The Rescuers Down Under." This program restored some of the variety of colors and soft shadings lost when Disney went away from hand inking and toward the new xerography process with "101 Dalmations" to cut costs. Thus, the colors in "Beauty and the Beast" are extremely vibrant, and Disney was able to move further away from the dark settings that appear in so many of its 1960-1990 animated films. Now Belle can sing outside under a clear blue sky, and not in a fancy hall or cave or something like that.

The CAPS program also provided a primitive form of 3D animation by separating the characters from the background, giving some depth to the animation. CAPS further combined computer imagery and hand-drawn characters seamlessly.

The almost magical ballroom sequence, in which Belle and the Beast dance while the camera circles, was a triumph of this process and instigated intense development of computer animation processes by places like Pixar. So, you have "Beauty and the Beast" to blame for the later over-use of CGI in almost every action/adventure/science fiction film. Here, though, it is used sparingly and in just the right places.

"Beauty and the Beast" won two Oscars for its songs (credit Harold Ashman, who sadly passed away during production, and Alan Menken, who went on to become the composer of choice for Disney movie musicals). "Beauty and the Beast" also was nominated for Best Picture, a true rarity then for an animated film. The opening operetta-styled "Belle" is a fan favorite and was the first one composed by Ashman and Menken. Other popular songs include "Be Our Guest," sung to Belle by the servants when she first comes to eat, and "Gaston," sung by the swaggering Disney movie villain. The songs were recorded live, with the orchestra and voice work together, rather than separately as is the more customary modern practice. This gives the recordings some echo and may take away a tiny bit of "radio-like" precision from "Beauty and the Beast," but it injects energy and sense of "being there" that cannot be duplicated otherwise.

"Something There" lets Belle and the Beast sing of their developing feelings and is one of the most romantic moments in "Beauty and the Beast." Céline Dion and Peabo Bryson perform a pop version of "Beauty and the Beast" over the end credits (Angela Lansbury sings it earlier in a somewhat tremulous but sincere voice as her character Mrs. Potts) which became a Top Ten hit in both the United States and the UK. Home video releases of "Beauty and the Beast" have music videos by Dion and Bryson along with later ones by Jump 5 and Jordin Sparks (on the 2010 Blu-Ray/DVD release). "Beauty and the Beast" was a breakthrough in that it was the first Disney movie to be adapted into a Broadway musical, a practice that subsequently became commonplace.

"Beauty and the Beast" was the first animated film to get nominated for the Best Picture Academy Award. It also was the last for many years due to the addition of the "Best Animated Feature" category, until "Up" and "Toy Story 3" came along after the annual nominations for Best Picture were doubled from five to ten.

The recent 3D release of this film has garnered very positive reviews, with some particular scenes - such as the key ballroom dance - much enhanced. Disney did a fine job with the 3D conversion, and that is the version to see if possible.

In the climactic ballroom dancing scene, the dancing is accompanied by Angela Lansbury singing "Beauty and the Beast."