Beyonce Knowles as Alice in Wonderland

It's a Wacky Ride for Alice in Wonderland


Beyonce Knowles portrays "Alice in Wonderland" in this eccentric shot of Alice with a couple of her companions. Alice is seen twirling in a teacup, accompanied by Oliver Platt as the Mad Hatter (right) and Lyle Lovett as the March Hare (center).

Now, Beyonce makes a fabulous "Alice in Wonderland." I will be a little heretical here and say that I like her better in this simple outfit than the usual leather and chains with which she adorns herself at her concerts. A simple blue-and-white dress shows off her loveliness to much better effect because it isn't competing for the viewer's attention.

Who comes up with the themes for some of these shots is unknown. Perhaps photographer Annie Leibovitz herself? Whoever it is has quite an imagination. However, having Lyle Lovett in the shot was a stroke of genius, as who looks wackier than Lyle? He gives the shot that extra little punch that sends it over the top into the realm of true art. I love the look on Beyonce's face, as if she's unsure whether to smile or to hurl. 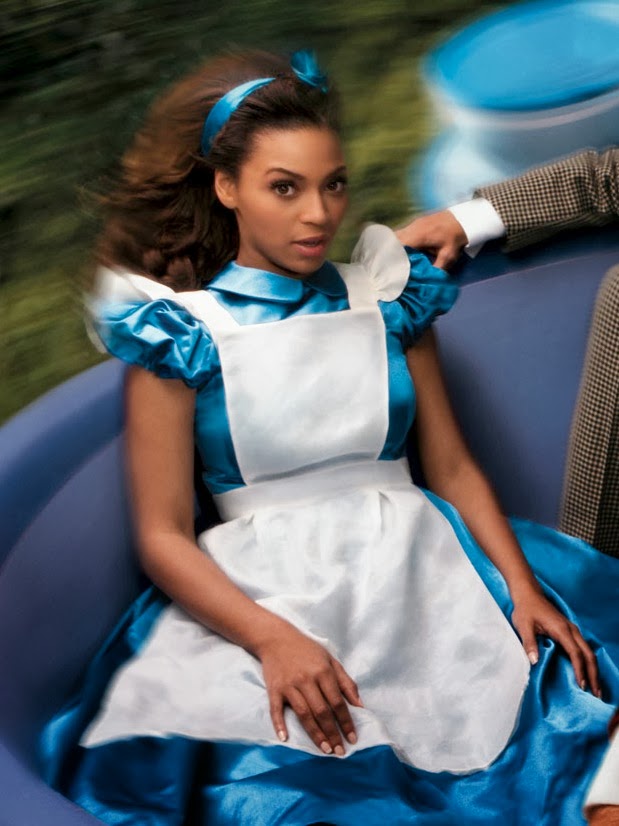