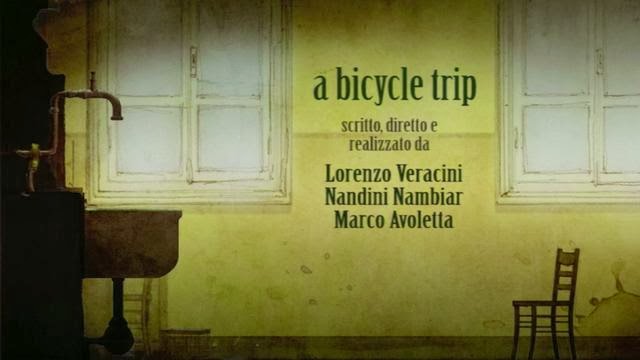 The animated short “A Bicycle Trip” (2007) recounts the fateful day in 1943 that Swiss chemist Albert Hofmann ingested a chemical compound he had synthesized. It was lysergic acid diethylamide, better known to Joe Friday of "Dragnet" as LSD.

Mr. Hofmann thus became the first person to intentionally experience an acid trip (he had accidentally dosed himself with acid a few days prior). The animation was created by Lorenzo Veracini, Nandini Nambiar, and Marco Avoletta.

There is orchestral operatic accompaniment, with the ordinary sounds of life (bird chips, a cat meows) dialed way up to (presumably) mirror what actually happens during an acid trip. This is a dreamy film, full of odd moments, weird perspectives, and ethereal vistas, perhaps best viewed ... during an acid trip. It may not be the best thing for young viewers. It is, in any event, a kind of history lesson of something that actually happened, and you certainly can't say that about most animation films.

I'm trying to add some short animation films to this site because that is where a lot of the really creative stuff appears. Also, anyone really interested in animation knows that there are creative animators around the world, so this short helps fill that gap a bit as well. These creative folks deserve some recognition before Hollywood co-opts their fresh ideas!