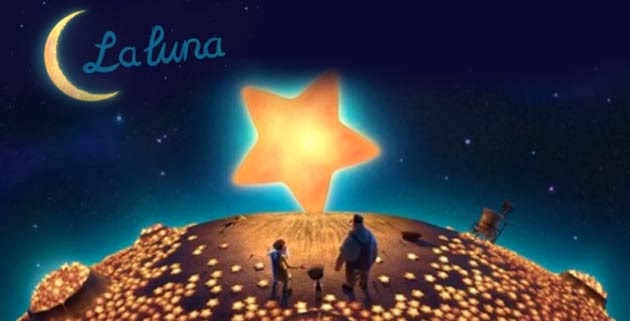 "La Luna" is a Pixar short that was written and directed by Enrico Casarosa. It is the longest Pixar short at 7 minutes. It is featured at the beginning of Disney/Pixar's "Brave." It is a fun little short that is best viewed in a spirit of wonder and delight by a child.

La Luna is the story of Bambino, a young boy. It is his first night working with his father and grandfather, and he is excited. On a very dark night, Father and Papa row the trio far out to sea to the middle of nowhere. There, they stop and wait. When Bambino discovers his family’s custodial line of work is far from ordinary, he must chose between the traditions of his father, grandfather, or find his own niche in the family business.

The short explains provides the reason behind the lunar cycle with a quite inventive explanation.﻿

Hopefully, the video of the short below works, sometimes they get taken down: