"Batman Vs. The Terminator" Fan Video


I am all for supporting independent/fan animation. Yes, we all love Disney films that cost hundreds of millions of dollars to put together. However, there also is value in an independent view imposed on accepted characters without the burden of appealing to the lowest common denominator in the US or China or Europe.

Producing their own shorts is where a lot of the industry big shots began, simply working up their own treatments and honing their skills.

This effort, "Batman Vs. The Terminator" is one of the better ones you will ever see. It is a five-minute animated film from Tony Guerrero and Mitchell Hammond, with music by Noir Deco.

According to the creators' synopsis:


30 years have passed since Bruce Wayne survived Skynet's nuclear blasts in August of '97. Iron demons now roam the planet, and without the requirement to defend the innocent against crime and injustice, Wayne has seeked refuge in the bomb shelter that saved his life; the Batcave.

Having scavenged the wasteland for resources, he discovers the radio of a dead soldier. There is static over a frequency. Flesh and blood is rising up to the west. With The Stinger; a riot control vehicular unit built before the apocalypse along with a refitted bomb blast vest, Batman makes his way across what remains of the United States to join forces with the man determined to neutralize the electronic menace - John Conner.

The original concept is credited to Tony Guerrero, the animation and sound editing to Mitchell Hammond. Do I know who these guys are? No, I haven't a clue. I do know they do good work without an entire studio behind them.

It appears to be Green Arrow and Solid Snake from Metal Gear Solid with John Connor in the three-man strike team. The tank is similar to the Batmobile in "Batman: The Animated Series Batmobile." It may just be me (probably is) but I see echoes of "2001: A Space Odyssey" in some of the design layout.

Oh, and just to show that this mixing of superheroes is not completely unknown, below is an interesting poster that features "The First Filipino Batman in Full Eastman Color!." 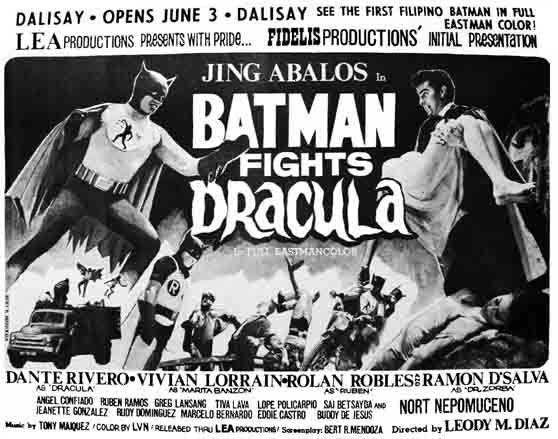