"Planes" from Disney (not from Pixar, despite the fact that it was spun off from Pixar's "Cars" and "Cars 2") was one of the surprise hits of 2013. Perhaps the least-anticipated feature film in Disney animation history, "Planes" starring Dane Cook pulled in a tidy profit for the studio despite minimal promotion and a generic storyline that referenced as many previous films involving planes (such as "Top Gun") as possible. 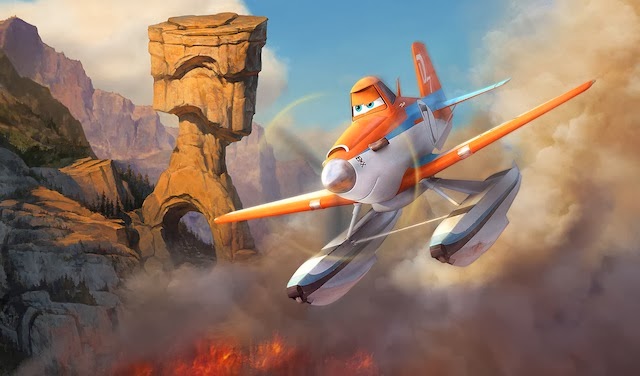 Well, as many "Planes" fans no doubt learned long ago, Disney immediately ordered a sequel once the box office for "Planes," um, zoomed into the stratosphere. With an incredibly short turnaround time of less than a year (one suspects they began working on some of it before the release of "Planes" itself), the DisneyToon Studios sequel "Planes: Fire & Rescue" will be released to theaters on July 18, 2014.

Now, those who greatly enjoyed "Planes" shouldn't get their hopes too high over this sequel. Despite having originally been intended for the home video market, "Planes" turned into (for DisneyToon, which specializes in cheap sequels) an improbably high-quality production. Besides Cook, it had top voice talent such as Teri Hatcher, Stacy Keach, John Cleese, Julia Louis-Dreyfus, Brad Garrett - the list of recognizable names goes on and on. To be honest, "Planes: Fire & Rescue" has none of that kind of recognizable talent listed. The top-listed names include Danny Pardo, Derek Blankenship.... That doesn't mean that the sequel won't be enjoyable. In fact, if the story is better, it may be much more involving than "Planes," and the animation looks great. However, we shall have to wait and see how the whole thing turns out.

In this episode, Dusty the adventurous crop duster (Cook) discovers that damage to his engine means he may never race again. Saddened, he looks around for something else interesting to do (besides, apparently, crop-dusting). He joins up with veteran fire and rescue chopper Blade Ranger and his team, which includes Lil Dipper the Super Scooper (Julie Brown). As in "Planes," it all comes down to Dusty proving that he has what it takes to succeed. In this case, it is battling forest fires from the skies with the rest of the crew. Bobs Gannaway directs.

The first promos is titled “Courage.” It showcases lots of sweeping scenery, dramatic aerial maneuvers and interactions with flirtatious Super Scooper who sets her eyes on Dusty.