This is a look back into 1912. The Titanic is getting ready to sail across the great Atlantic and set a new crossing record, while Teddy Roosevelt is upset that his erstwhile protégé William Howard Taft is ignoring him and is preparing to run for President on the Bull Moose ticket. There hasn't been a major European war in thirty years, and folks are talking of a time of perpetual peace. But people are still people, and sometimes they are tempted to do bad things. 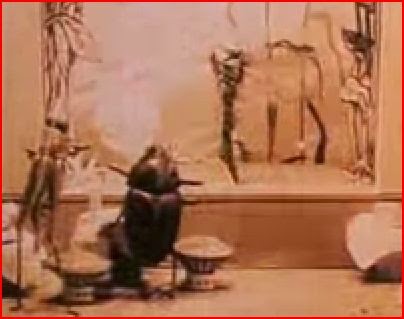 We are in Russia, where the real action in film-making is taking place, and that eccentric cutting-edge auteur Ladislaw Starewicz has created his new film, "Cameraman's Revenge." It is all done with dead bugs, and it is captivating.

If you have the patience to sit through this simple morality play, it's pretty interesting to see how cleverly everything is being done. While "Cameraman's Revenge" is about love and loss, the entire sexual dimension is removed because, well, they're dead bugs. This allows us to focus on a tale of what is right and what is wrong. The story is still as pungent as it was the day Ladislaw started filming, a universal story of what goes around, comes around.


It comes as a bit of a shock when you see the signs in Russian - there's nothing else to suggest the origin of this stop-motion animation. When you see the name of the scene of the Lover's Tryst - the Hotel D'Amour - it's just perfect, with French being the universal language of what is going on and easily understandable to us now even after 100+ years in a film made for Russian audiences. The scene of the film screening takes us back to a time when there were no movie palaces for the great unwashed - films were shown in living rooms or lounges when someone put up a simple screen, set to cranking the camera, and then took it down afterwards.

At some point, if you pay attention and just focus on what is going on, you will forget that you are watching bugs and you will follow the story of deceit and betrayal. That, my friends, is the magic of the moving pictures, 25 years before "Snow White and the Seven Dwarfs."