Look Back at Origins of World War I 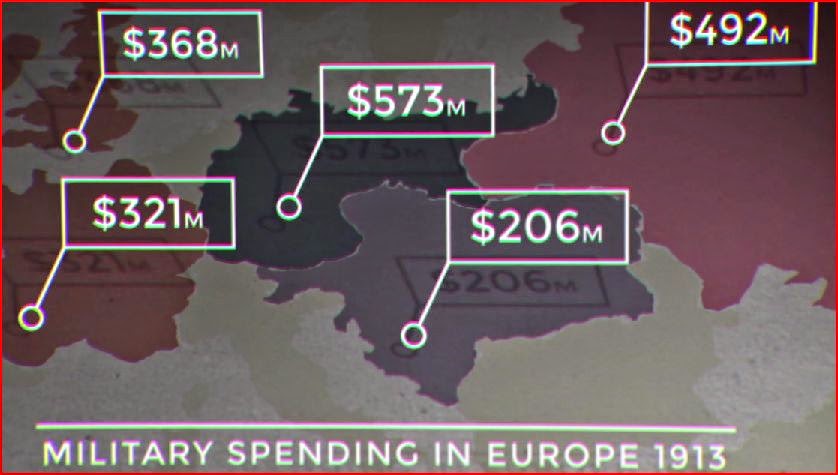 Cause and Effect: the unexpected origins of terrible things from Delve on Vimeo.

This is a nice blend of live action, historical footage and animation which delves into the origins of World War I.

The First World War was the defining event of the century in political terms. It spawned the Second World War, which nowadays gets all the press, but the First World War was much more significant in a larger sense. It broke down the prevailing system of government and sowed the seeds of chaos around the world - including, as is often forgotten, the Middle East. You can draw a direct line from the treaties that arose out of World War I and today's events in Israel and surrounding areas.

The underlying theme of this video is "it's all personal" - and it's difficult to argue with that. It uses the unusual device of going backwards in time to derive the small causes of terrible things.

The conclusion is original and makes a lot of sense.

A brand new video essay from delve!
100 summers ago the countries of Europe collapsed quickly into war: it was sudden but also strangely inevitable. Countless books have been written since about the causes of The Great War, but in this video essay we offer an alternative history. By tracing the story backwards in time we stumble upon a very unexpected cause and discover that sometimes the most harmless of things can have terrible consequences.
Story Design & Direction: Adam Westbrook adamwestbrook.co.uk
Additional Photography: Brett Walsh brettwalshphotography.com
Animation: Adam Westbrook
Archive footage from the US National Archives released in the public domain
Stock footage via Videohive and Pond5
All photographs in the public domain via Wikimedia Commons.
Satie's Gymnopedie No. 2 performed by Kevin McLeod incompetech.com
Additional music and sound effects via AudioJungle
Story assistance from Caroline Vanier, Cody Delistraty and Chris Schaefer.
Indonesian translation: Farras Octara farrasoctara.com/
Here are the books I used in researching this essay.
The Guns of August by Barbara Tuchman amazon.co.uk/The-Guns-August-Bestselling-Outbreak/dp/0241968216/
The War that Ended Peace by Margaret Macmillan amazon.co.uk/The-War-that-Ended-Peace/dp/1846682738/
Catastrophe: Europe Goes to War 1914 by Max Hastings amazon.co.uk/Catastrophe-Europe-Goes-War-1914/dp/0007519745/
Dreadnought: Britain, Germany and the coming of the Great War by Robert K Massie amazon.co.uk/Dreadnought-Britain-Germany-Coming-Great-ebook/dp/B00D5FOGL6
The Last Kaiser by Giles MacDonogh amazon.co.uk/Last-Kaiser-Life-Wilhelm-II/dp/0312305575/
The Influence of Sea Power on History 1660-1783 by Alfred T Mahan amazon.co.uk/Influence-Power-Upon-History-1660-1783/dp/1589801555
===
Translate this video into your own language!
You can download the English script, plus instructions, here: delve.tv/wp-content/uploads/DelveCauseAndEffectScript.html
===
Watch more fascinating video essays on delve.tv
The Man Who Turned Paper Into Pixels: delve.tv/the-man-who-turned-paper-into-pixels-information-theory/
A Little History of the World on Instagram: delve.tv/instagram
The Long Game Part Two: delve.tv/the-long-game-part-2/
The Long Game Part One: delve.tv/the-long-game-part-one/
Find out more about the delve.tv project: delve.tv/about/
Sign up to our mailing list to see the next essay first! delve.tv/

Email ThisBlogThis!Share to TwitterShare to FacebookShare to Pinterest
Labels: Admiral Mahan, Archduke Ferdinand, Cause and Effect, Kaiser Wilhelm, origins of World War I, World War I