The Disney Studio at War

There is a lot of misinformation among the popular press and certain Hollywood stars about Walt Disney. If nowhere else, this blog aims to set the record straight.

There is no question that Walt Disney was a conservative man. He did not like swearing or carousing. There is a famous story about how, upon the overwhelming success of "Snow White and the Seven Dwarfs" during the 1930s, he invited the entire staff to a resort near Palm Springs to celebrate on his dime. Walt expected that, like himself, everyone would treat this as a family outing, everyone would bring their kids, see the sights, and so forth.

So, Walt Disney was not your standard Hollywood liberal. That's just the way it was, no getting around that. That annoys some folks today, but it can't be helped.

Upon the Japanese attack on Pearl Harbor, Walt was eager to support the war effort, even though the war was devastating to the studio's finances because of the closing of foreign markets. Secretary of the Treasury Henry Morgenthau was worried about the nation's finances, so he called Walt up and asked him to come to Washington. Walt Disney was intrigued. He figured it was a plea to help sell war bonds, immediately hurried across the country.

When he got to the capital, Walt found that Morgenthau wasn't worried about war bonds at all, or at least that was not the purpose of the meeting. Instead, Morgenthau was worried that people might not pay their taxes. This kind of mystified Disney, because paying taxes was something everybody had done for many years, but he figured that Morgenthau must know what he was talking about. Morgenthau was concerned about what he knew would be fantastic costs to gear the war up for war, and ensuring revenues to the government was all-important. The Secretary gave Disney an offer to make up a short animated film that would encourage the public to pay their taxes and to have it in theaters by February 1942, with the government to pick up the costs.

Walt took the offer despite the incredibly short turnaround time. He had all his animators drop everything else and crank out a short film called "The New Spirit," starring the top animated star in the world, Donald Duck.

Morgenthau wasn't pleased when he reviewed the film - it turned out he didn't like Donald Duck. However, the short film was ready to go and there was no alternative, so he accepted the film for release. It appeared in February 1942 in advance of the (then) March 15th tax filing date. For his efforts, Disney lost $40,000 in theater bookings because theaters simply replaced other Disney products with this free one from the government - audiences loved Donald Duck and didn't care that it was a public service message. The government also later stiffed Disney on $80,000 in expenses for the film. This was rough because the Disney studio already was reeling from losses suffered from "Pinocchio" and "Fantasia." Beyond that, using Donald Duck inherently devalued the brand, costing future revenue. However, Walt was not about to complain about money when men were dying in the Pacific. That's just the way he was.

Walt Disney, in other words, was a patriot out to help the country win the war, and he soon got another chance. Morgenthau, while not personally a fan of the film, was pleased with the results of "The New Spirit" (people paid their taxes and new aircraft carriers got funded) and asked Walt to make a second film on the same theme the following year. Walt complied. This was "The Spirit of '43," again starring Donald Duck. It was another huge success at its purpose.

Walt Disney also worked with Nelson Rockefeller at the State Department to create "Saludos Amigos" and "The Three Caballeros," propaganda films aimed at bolstering US relations with Latin America. Those films worked as intended and were enjoyable films even beyond that purpose (and remain so today). Disney also did other promotional work during the period, showing that Walt Disney stood by his country in its hour of need 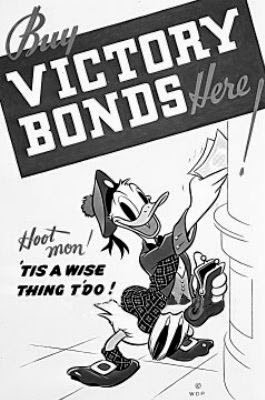 So, when people these days say negative things about Walt Disney, just bear in mind that things were different back in the day, and Walt Disney did more to help his country than any of those who go out of their way these days to try to smear him.