Pixar brought out the animated "Monsters, Inc." (2001), featuring cutting-edge computer-animation, to rave reviews. It was a breakthrough film, easy on the eyes and designed for everyone to enjoy, though kids will probably get the most out of it because of the warm, fuzzy, accessible characters.

In the city of Monstropolis, populated solely by monsters, the power company is named Monsters, Inc. Life is normal there until the intrusion of a human baby girl (also animated) named "Boo." A confident, tough, large, furry and blue behemoth-like giant monster named James P. Sullivan (better known as Sulley) and his Cyclopsian wisecracking best friend (a short, green monster with one large eye), Mike Wazowski, are forced to try and deal with this unexpected situation.


It is up to Sulley and Mike to send Boo back home before anybody - especially two evil villains named Randall (of whom Boo is very afraid, and who possesses the ability to change the color of his skin) and Mr. Waternoose (Mike and Sulley's boss at, and chairman and chief executive officer of, Monsters, Inc.) - messes things up and causes events to spiral out of control.


Directed by Pete Docter, Lee Unkrich, and David Silverman, we have the usual collection of top voice actors in this one - Bonnie Hunt as Flint (who also has a lead role in the "Cars" franchise, and her character's name may be a nod to James Coburn's classic '60s roles playing a hitman named Flint), John Ratzenberger as The Abominable Snowman (who turns up as a supporting character in almost every animated film these days).

Anyone who can't spot the resemblance of the main characters to Fred Flintstone and Barney Rubble must not be familiar with the classic Hanna Barbera "Fred Flintstone" animated television series, because the similarities are clear. That's not a bad thing, but it's fun to spot stuff like that. 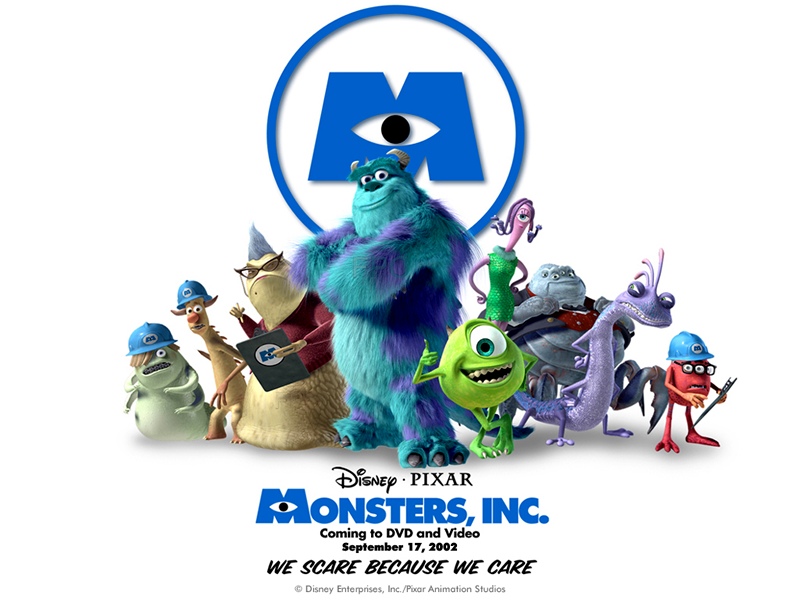 Seriously, these animated films can get so incestuous with cross-over voice actors that you just imagine the producers sitting around a big table, shouting across at each other, "OK, I'll take one Steve Buscemi and raise you, James Coburn!" "Well, I'll take your Coburn and raise you, Dustin Hoffman!" Everything proceeds at a standard pace, this was put together by real pros who know what they are doing and pay a lot of attention to detail. The film is a bit dark in spots (at one point, a child is strapped into a machine that will make her scream), so it may not be suitable for the youngest children, but there haven't been a lot of complaints about it.

The story is full of knowing winks to adults, as you would expect in these animated films. On the flip side, some of the adult humor may fly right over some kids' heads. Everyone should still appreciate the colorful monsters and the novelty of a city with only monsters walking the streets.

The "trademark" of this film is the monsters are loveable (of course) and many have weird eyes - either just one eye in Cyclops fashion, bulging eyes, tiny eyes, or something along that theme.

Nothing too scary for little kids, but they will probably notice it more than you do. Incidentally, "Finding Nemo" was in a sense spun off from this film, because if you look carefully, you will see Nemo's first appearance as a stuffed toy on Boo's couch.

At one time - and perhaps still - this held the record for most DVDs sold. Recommended for kids and anyone else with an open mind regarding animated films. The long-awaited prequel, "Monsters University" came out in 2013 and did very well.