Finding Nemo (2003) - The Greatest Fish Tale Ever for Kids 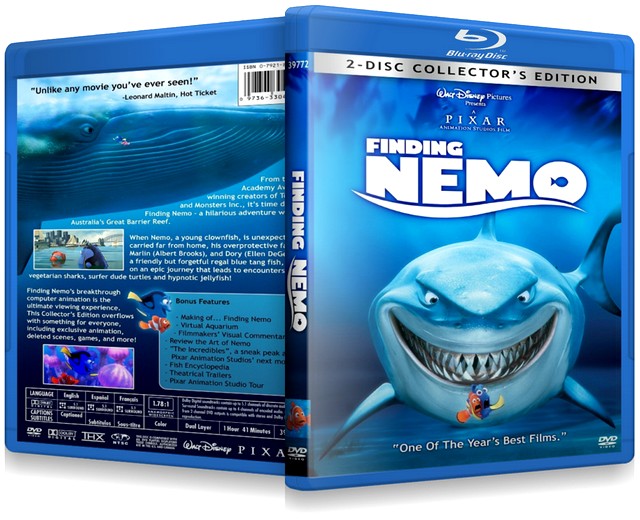 "Finding Nemo" (2003), directed by Andrew Stanton and Lee Unkrich for Pixar, is one of the great children's animation films, a spin-off from "Monsters, Inc." This established box office and DVD-sales records upon its release dates, but it was a one-shot affair. Unlike, say, "Shrek," the studio did not immediately cash in with a ton of sequels, so as yet there is no follow-up (but one has been announced to be released in 2016). You and your child will likely be enthralled by the colorful action underwater.

We are introduced to a clownfish named Marlin (Albert Brooks) who lives in the Great Barrier Reef off Australia (though the location matters little). Unfortunately, he loses his son, Nemo (Alexander Gould), who winds up getting into trouble because he ignores his father's wise warnings.

To find his son, Marlin ventures into the open sea against his father's constant warnings. It turns out that Nemo was abducted by a boat. He wound up netted up and sent to a dentist's office in Sydney. Marlin ventures off to try to retrieve Nemo, and while doing so, meets a fish named Dory (Ellen Degeneres), a blue tang suffering from short-term memory loss.


The two companions travel a great distance, encountering various dangerous sea creatures such as sharks, anglerfish and jellyfish. Fortunately, the dentist's office is situated by Sydney Harbor and thus is accessible to them.

While the two are doing this, Nemo and the other sea animals trapped in the dentist's fish tank plot a way to return to Sydney Harbor to live their lives free again.

Albert Brooks is one of my favorite comic actors (his "Lost in America" is a must viewing). Degeneres only became more popular after this film and is very engaging as the bumbling Dory. If you are going to spend 100 minutes with a pair of fish, these are the two with whom to do it.

Despite the lack of sequels (one is scheduled to appear in 2016, called "Finding Dory"), this is one of the top animated films ever made. "Finding Nemo" is suitable for virtually every child. Highly recommended. Below is the trailer.