The modern kind of animation film - that is, the kind aimed at teens and young adults at least as much as children - aims to press as many hot buttons as possible. We're definitely not talking about fair maidens waiting for their prince, or lonely alien robots just looking for a nice young kid to have as a friend. Instead, it is all about knowing bathroom humor and picking relatively safe and defenseless targets to attack. That way, the audience can feel a sense of community in the foulness of their real lives, which are never as pure and pretty as Hollywood would have us believe.

As usual, Television started breaking down the barriers. The "South Park" (1997) franchise exemplifies this trend, though it began with the animated "Beavis and Butt-Head" (1993), the live-action "Married with Children" (1987) and even, if you think about it, "All in the Family" (1968). The creators, Trey Parker and Matt Stone unleashed a juggernaut of bathroom humor that just keeps rolling.

They are Colorado boys, and their work is loaded with references to their home state (South Park is a plain between mountain ranges in the Rockies).  In the animation world, they are kings, even though as animators they aren't all that special. It is their swagger and hook that keeps 'em coming back. They get top celebrities such as George Clooney and Jennifer Aniston to voice their characters, and as of this writing continue with their flagship animated TV series.

Parker and Stone made only one major misstep, and this film isn't it. Their attempt to become live-action stars in their own right failed miserably. In their acting attempts, they look like deer caught in the headlights, self-conscious and awkward. Unfortunately for them, they are not even real-life "Wayne's World" types, however hard they pose as such.

Their presence helped cause the 1998  "BASEketball" to tank at the box office. But they learned from their mistake that animators should stay behind the camera, not in front of it, and this film, "South Park: Bigger, Longer and Uncut" (1999), wisely sticks to animation.  Naturally, like pretty much all their animation efforts, it was another huge success.

The moral of the story is, stick to your own field. If you are a top animator,, stick to animation. Just because you are good at one thing, does not mean you will naturally succeed at something else, even something related.

This film is like an extended version of one of their TV episodes, hence the (obvious double entendre) title, but they also make the audacious decision to insert some songs (including the Oscar-nominated "Blame Canada"). When four boys in South Park - Stan, Marsh, Kyle and his stepbrother Ike Broflovski, Eric Cartman, and Kenny McCormick - sneak into an R-rated movie called "Terrance & Phillip: Asses of Fire", which features Canadians, they are pronounced "corrupted." Kyle's mom Sheila and the rest of the parents are outraged and pressure the United States to declare war against Canada. Stan, Kyle, and Cartman then must save Terrence and Phillip before Satan and his lover Saddam Hussein from Hell take over the world. 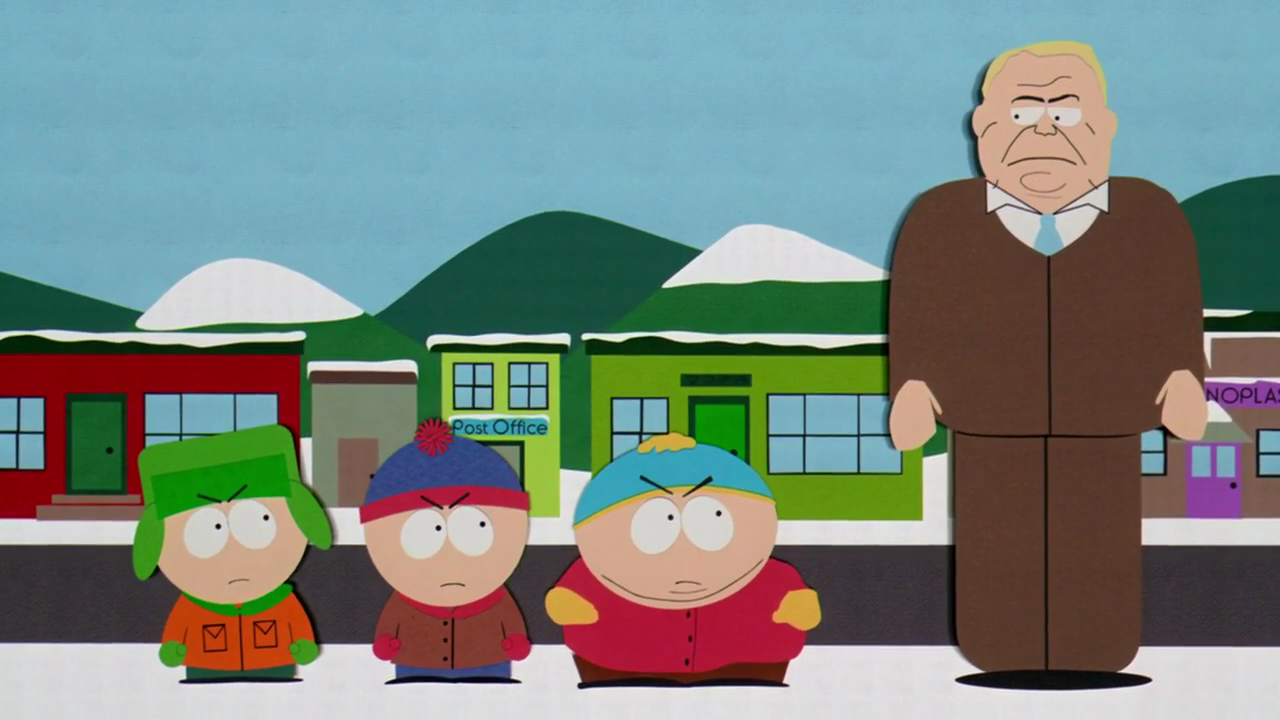 As usual, Trey Parker and Matt Stone hog all the main voices themselves, with celebrities like Clooney, Brent Spiner, Dave Foley, Eric Idle and Minnie Driver sprinkled in for name value here and there.  It's all about pop culture, with the biggest consequence of a war with Canada being an air attack on the Baldwin brothers (who are from Long Island, New York, not Canada, but really, who cares?). There's nothing particularly original about the plot, though a teen audience might think so. Alan Alda and John Candy, in fact, did a take on that very idea just a few years before this film in "Canadian Bacon (1995)." The plot, though, is just an opening through which to throw salvos of brickbats at whatever target suits Stone and Parker, whether it be parenting, the media in general, or America's predilection for invading weaker countries. Clearly, given that they are in the gross-out animation business, one of their targets is the idea that kids can be corrupted by gross-out films. Perish the thought!

Parker and Stone are experts at poking fun at the audience's insecurities and how "cool" or "uncool" certain figures or concepts are in the popular vernacular. There's the usual "have it both ways" idea of kids being poor little innocent victims of corrupting adults, but at the same time the kids are just as knowing and vulgar and obnoxious themselves, if not actually more so.  You get the typical "hypocrite" line, where obvious inherent contradictions in celebrities' positions are poked at. Some of the humor is topical and won't play as well down the road as it did then. Saddam Hussein is long gone, so having him as the archetype of evil looks almost quaint now, just as Moammar Khaddafy will just be a historical curiosity in fifty years. At the time this film was made, though, Saddam was basically thumbing his nose at the West while coming up with all sorts of unintentionally humorous quotes (hey, he deserves full credit for the "mother of all ___" line). When somebody says idiotic things that get widely publicized, and the person isn't even aware of the banality of their own utterances - instant pop culture target. 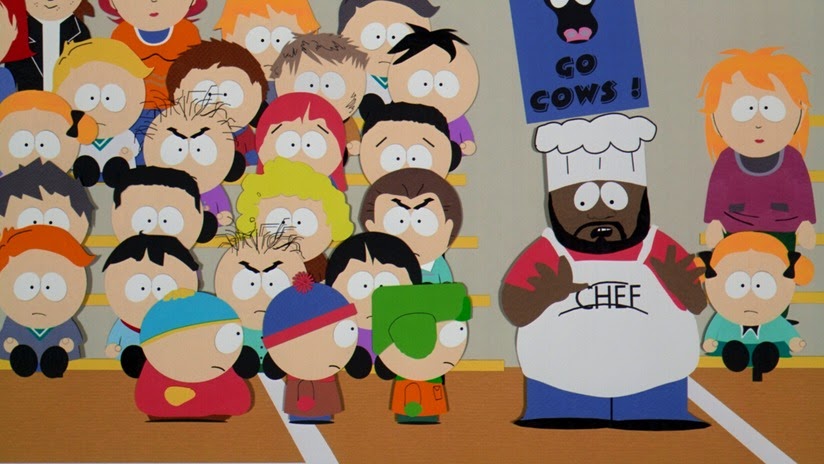 But we are not talking about Shakespeare here.  Nobody is going to care about this 400 years from now, or maybe even forty. It is "cutting satire" designed to offend "soccer moms" everywhere.  You will probably find it amusing, but, like all topical humor, it no doubt will tend to fade with age.