Shrek the Third (2007) - Another Round for the Shrek Gang

Shrek the Third: The Battle Over the Succession Turns Ugly!

"Shrek the Third" (2007) continues the animated adventures of our favorite hairy hero, Shrek, as he just tries to live his life in peace while everyone else keeps pulling him back into trouble. When his new father-in-law, King Harold falls ill, Shrek is looked at as the heir to the land of Far, Far Away.

Not one to give up his beloved swamp, Shrek recruits his friends the Donkey and Puss in Boots to install the rebellious Artie as the new king. Princess Fiona, however, rallies a band of royal girlfriends to fend off a coup d'etat by the jilted Prince Charming. 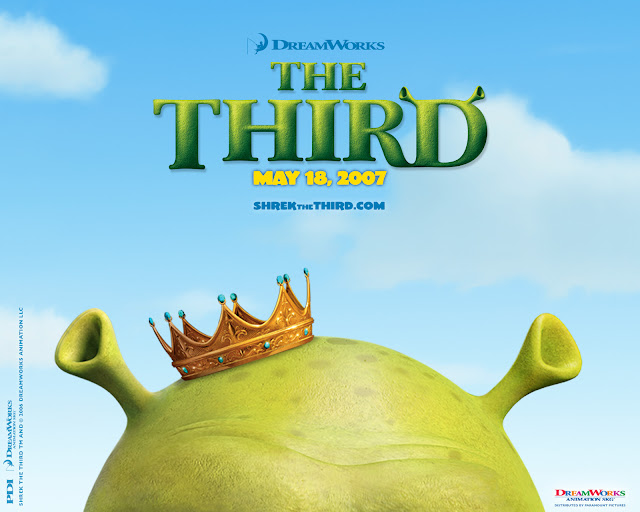 Mike Myers, Eddie Murphy, Cameron Diaz, Julie Andrews, John Cleese, Rupert Everett, and the rest all reprise their roles from the other Shrek films. However, Andrew Adamson stepped aside this time and turned the directing chores over to Chris Miller and Raman Hui. As usual, there are lots of fast jokes that will keep the children happy. Some relatively adult issues, such as the fear of becoming a parent, might lose some of the younger children.

The only thing truly missing is a little originality. "Shrek the Third" received poor reviews when it came out. The critics really did not like it. The third film in a franchise often gets that kind of reception. It still did a very respectable box office.

With a budget of $160-million and directed by Chris Miller and Raman Hui, the movie made a domestic-gross of over $322-million. Overall, it made $800 million worldwide. Doubling your gross is usually considered the break-even point, so this film undoubtedly made the studio good money. The film was promoted heavily, and successfully.

Of course, the box office is not the real measure of animated film quality, except for the accountants. The widespread complaint about this entry is that it was not as funny as the first two films. Also, the same kinds of jokes are made (the animated creatures singing versions of classic rock tunes, for instance), and they can seem a bit stale. The absence of Adamson at the helm may have had something to do with this.

There was another, and officially final, Shrek film after this, "Shrek Forever After" (2010). It also was heavily criticized, and also made a ton of money, almost as much as the others. Either you like the whole Shrek universe, or you don't. Clearly, many, many moviegoers do.

DreamWorks' marketing for "Shrek the Third" went into overdrive. The company naturally was excited for the series after the outlandish success of "Shrek 2" and plastered the media with promotion. It got so bad that some online comedy teams like Tim and Eric of Adult Swim started creating parody ads "promoting" the film on television and radio and in podcasts and the like. It's hard to say what effect all that had on the success of "Shrek the Third," but it sure got the word out about the film - perhaps a bit too much for some folks.

This continues the Shrek juggernaut and made a lot of money. Just don't expect to be dazzled as with the first installment, or pleasantly surprised as in the second. This is simply a continuation of the story, without really expanding the characters or adding any new dimension to the franchise. Check out the trailer below!