Shrek Forever After - Rumpelstiltskin Pulls A Fast One on Shrek 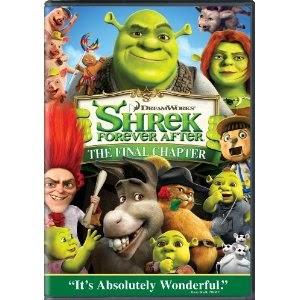 After the critical lambasting taken by "Shrek The Third," Mike Myers (Shrek) and company (Eddie Murphy as the Donkey, Cameron Diaz as Fiona, Antonio Banderas as Puss et. al) returned quickly with this DreamWorks animated conclusion to the Shrek Story, "Shrek Forever After (2010), directed by Mike Mitchell. Many would agree that "Shrek Forever After" is a slight improvement over the previous entry in the series, but it still is nowhere near as entertaining as was the original Shrek film or even Shrek 2. That didn't stop "Shrek Forever After" from doing the usual "Shrek" box office, of course. It ultimately took in over $750 million worldwide.

This time around, Shrek is bored with living the domestic life. A trip to Far Far Away turns into a demeaning disaster, with children disrespecting him and people acting as if he is completely harmless. After smashing the kids' birthday cake, he tells Fiona that he was better off before he ever met her.


Con artist Rumpelstiltskin (Walt Dohrn)sees and hears all this, and he has an idea. After pretending that Shrek has saved him from an accident, he offers to grant Shrek a favor. Shrek quickly makes a deal with Rumpelstiltskin to exchange a day from his childhood that he wouldn't remember anyway for a day where he will be respected as a true Ogre. Shrek signs on the dotted line, and suddenly finds himself in a place where, indeed, he is feared by the villagers and everyone respects his true power as an ogre.

After having a little good-natured fun and seeing "Wanted" posters for Fiona, Shrek is captured by witches and brought before Rumpelstiltskin. In this universe, Rumpelstiltskin is king and ogres like Shrek and Fiona are hunted down and killed. Worse still, he and Fiona have never met, and if Shrek doesn't get a "true kiss" from her before the next sunrise, he will fade from existence completely. The day that Rumpelstiltskin erased was the day that Shrek was born, and if the contract runs to its conclusion, Shrek's existence also will be erased.

Shrek escapes from Rumpelstiltskin with the aid of the donkey, who doesn't know Shrek at first but eventually comes around and becomes friends with him again. The Donkey reads the contract and finds a loophole: the only way to nullify the contract is for Shrek to get from Fiona "love's true kiss." They set out to look for Fiona, and soon find her with a renegade band of ogres and the retired and overweight Puss in Boots as her pet.

Fiona is all business and has no time for Shrek. She is planning an attack on Rumpelstiltskin and doesn't want to hear about true love. While arguing with Shrek, though, Fiona begins to like him a bit, though it doesn't lead to true love yet. The ambush against Rumpelstiltskin fails miserably, and Fiona and Shrek only escape with the help of Puss and Donkey. Shrek, however, turns himself over to Rumpelstiltskin in exchange for the amnesty for all ogres, but Rumpelstiltskin finds a technicality that excludes Fiona because she is not "all ogre," just one by night, and he plans to feed both Shrek and Fiona to Dragon.

Shrek and the others finally manage to overpower Dragon, but the sun is about to come up and it may be too late. Will Fiona realize the power of true love and save them both?

By this installment, Shrek and the gang basically are cult film characters. Either you like their act by this point and want more of it, or you don't. This is not a good film to start your Shrek experience with, because it assumes you know the events of the preceding three films. If you don't understand the deep bond between Shrek and Fiona, why would you care if they are split up? So, better to start from the beginning and watch the preceding three films first. That will greatly enhance your enjoyment of this one.

The entertainment is wholesome and satisfying if you are not too critical. One can see where the creators of the hit ABC TV series "Once Upon a Time" got some of their inspiration (which, I'm sure, they would vehemently deny, with loud declamations and all sorts of incontrovertible proof). The script is somewhat bland, however, and the jokes don't seem as fresh as in the first film of the series.

This one also suffers from being in a somewhat gimmicky 3D animation format. It doesn't really seem to add much to the film compared to the others. If you love wearing those 3D glasses, though, by all means, run out and watch this one! Small children may have trouble keeping the glasses on... If like me, you don't really care for it most of the time, you may wind up enjoying this about as much as you did "Jaws 3-D." Oh, you never watched that film? Exactly my point. Not too many people did.

This film was promoted as being the final installment. Who knows? There hasn't been any buzz about a follow-up, so maybe it is - at least, for now. They did make a "prequel" starring Shrek's loveable companion "Puss in Boots" in 2011, so they already are parsing the definition of "final." Mike Myers and the rest are set for several lifetimes, so there is no pressing need. But "never say never again," you know. That this might, indeed, be the end, at least for this generation, may account for the fact that critics were a little softer on this one than on "Shrek the Third." No more Shrek? To many, that is like losing an old friend.

Defenders of this film usually point to the gross. Indeed, it made about as much money as did the previous Shrek films, so what's the problem? All very well and good, but they ended this series for a reason, and that is they just were running out of inspiration. Trust the power of the almighty Dollar, this series will be back someday, it just needs a rest.

As far as "Shrek" films go, this is good but not great. In terms of the story, you could watch this right after the first "Shrek" film and not miss anything by having skipped the second and third installments. In fact, that might even make more sense, since this deals with the events surrounding Shrek's initial rescue of Fiona. Then, you could watch "Shrek 2" and leave "Shrek the Third" for last. At least, in hindsight, that makes the most sense now, and if you never have the chance to actually watch "Shrek the Third," well, at least you've seen all the really good Shrek films.

"Shrek Forever After" does have a lot of laughs. It borrows liberally from Jimmy Stewart's "It's A Wonderful Life," and has a deep air of sentimentality to it, especially the closing credits which feature pictures from the entire series backed by a sappy Stevie Wonder tune. It is fun, it will make you laugh, it just doesn't offer much new in the way of expanding the characters or parodying traditional fairy tales. Instead, it becomes an exercise in puns and action sequences that the first two Shrek films kept under control, but now take over the entire film.

If you liked "Shrek," if you like "Shrek 2," if "Shrek the Third" was fun for you, then this one is in the same vein and you definitely should see it. It is almost mandatory, like attending graduation from school. Otherwise, I would steer clear.