¡Ay Caramba! The Dogs are Running Wild with Laughter! 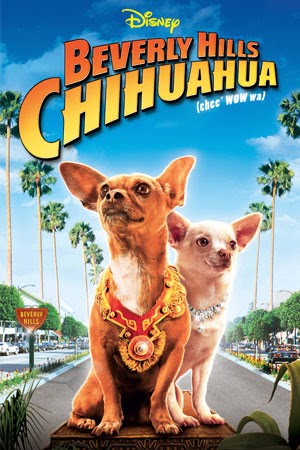 Walt Disney Pictures is more focused on live action feature films than animated ones, but it does dip its toe into that realm every so often. With "Beverly Hills Chihuahua" (2008), directed by Raja Gosnell and starring Jamie Lee Curtis, Piper Perabo and Drew Barrymore (providing a voice for canine lead Chloe), the studio succeeds at the growing trend of combining live action with animation (as in the "Smurfs" series). This is very subtle animation, called "digital muzzle replacement" for those in the business, but very effective animation nonetheless. "Chihuahua" succeeds and is a fine partially animated family comedy from Disney. 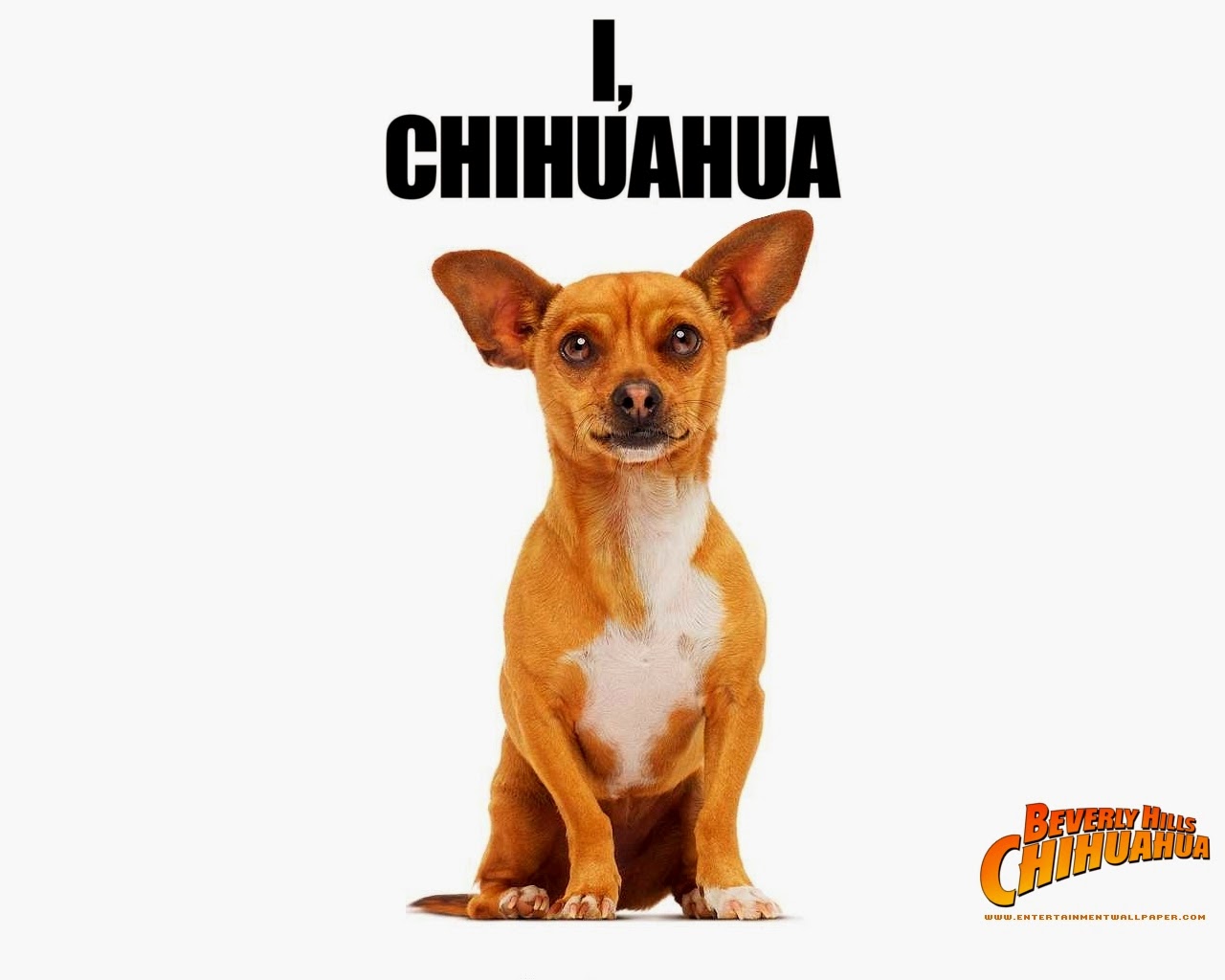 Chloe is a happy and pampered chihuahua who lives with Vivian "Viv" Ashe and Viv's niece, Rachel. When Viv is away on a business trip, Rachel suddenly decides to go on vacation to Mexico. Rachel takes Chloe along and leaves her alone in her hotel room while she parties. Chloe, being curious, leaves the room to see what Rachel is up to. Unfortunately, though, some dog-nappers spot Chloe and snatch her to perform in dog fights. When Rachel returns, she is terrified that Chloe might be gone for good desperate to find her. 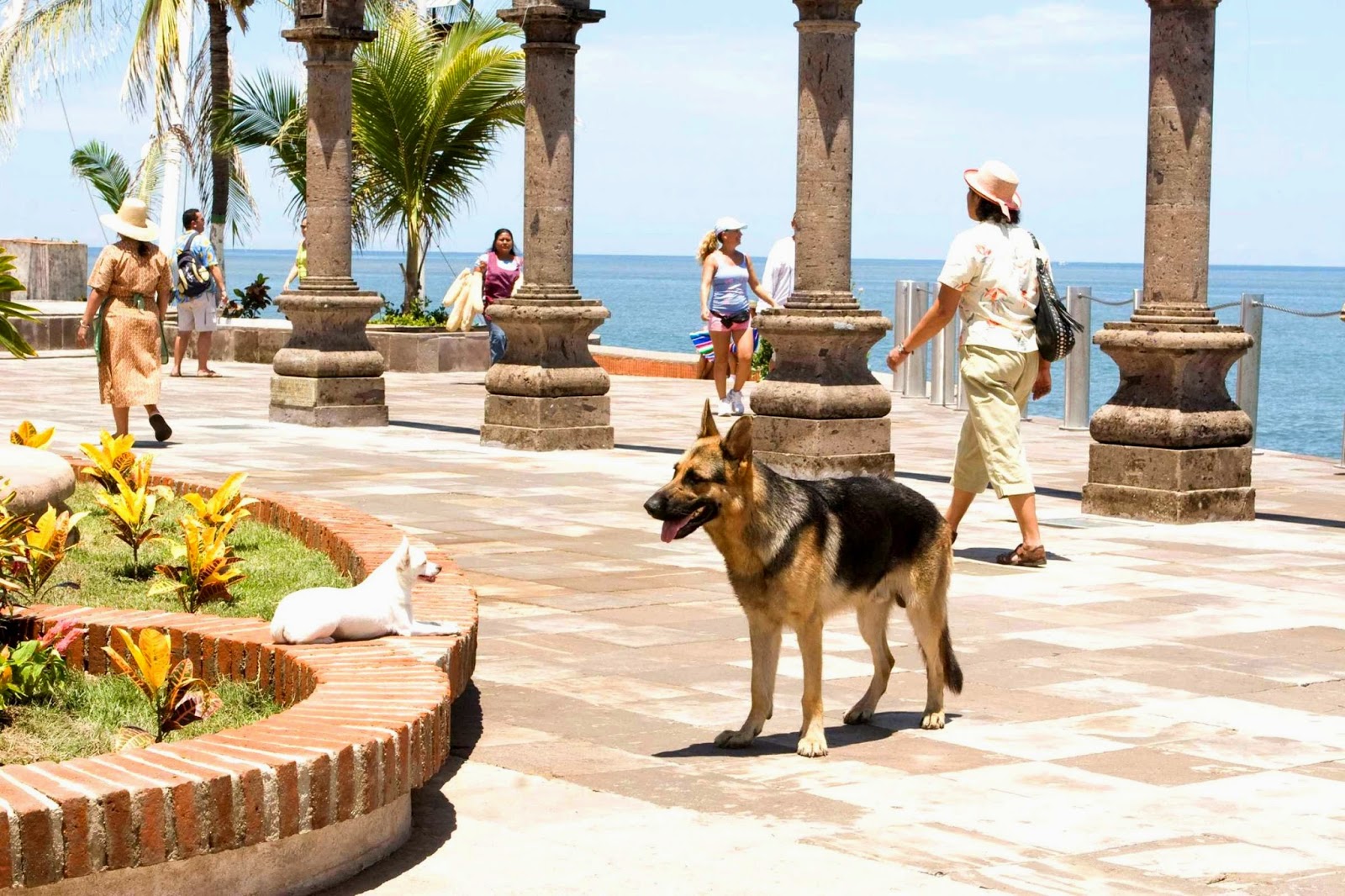 Brought to Mexico City, Chloe meets Delgado, a local German Shepherd, and they become friends. For her first fight, the dog-nappers match Chloe up with an Argentinian Doberman Pinscher, El Diablo. Things look bad for Chloe, as she is certain to be killed by the menacing El Diablo, but Delgado helps Chloe to escape. After much back and forth, he agrees to help her return to her privileged existence in Beverly Hills. 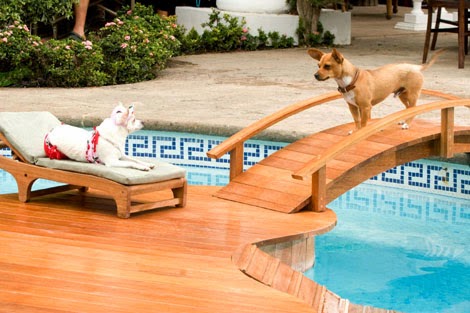 In order to track Chloe down, Rachel turns to Sam, Viv's gardener. Together, they go to the police and offer a reward. Dog-napper Vasquez learns of the reward and turns El Diablo loose to retrieve Chloe. After Delgado leads Chloe to Puerto Vallarta, El Diablo tracks her down, but Chloe manages to escape. Delgado goes to find help, and while he's away Chloe is conned into handing over her valuable diamond-studded necklace to Chico, an iguana, and Manuel, a pack rat. When Delgado returns, the pair hop a train to the border, but along the way they have to jump out and wind up in the sandy desert of Chihuahua. Delgado confides to Chloe that he's actually an ex-police dog who used his powerful sense of smell to help track down criminals, but he lost his ability after a bad bust. 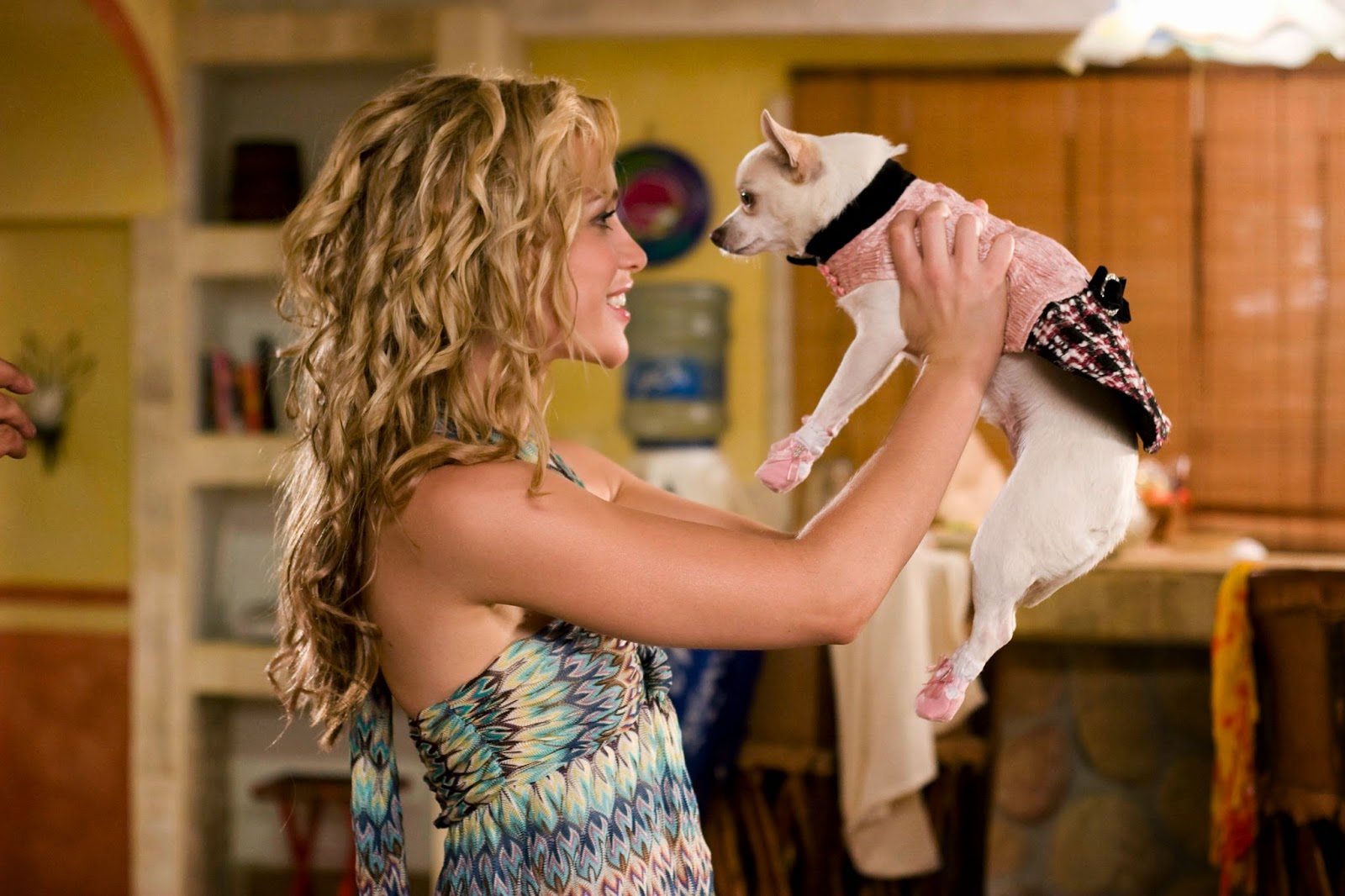 Rachel and Sam, meanwhile, are hot on the trail. They learn in Puerto Vallarta that Chloe wound up in Chihuahua. El Diablo learns this, too, and almost succeeds in retrieving Chloe. Sam's dog Papi, who has a crush on Chloe, thwarts this abduction but gets caught himself. Delgado shows up, and ultimately Choe winds up rescuing Papi. Rachel finally finds her lost Chloe, and the police arrest Vasquez. Everyone returns home, and Rachel wind up with Papi, Rachel with Sam, and Delgado regains his sense of smell and returns to the police force. 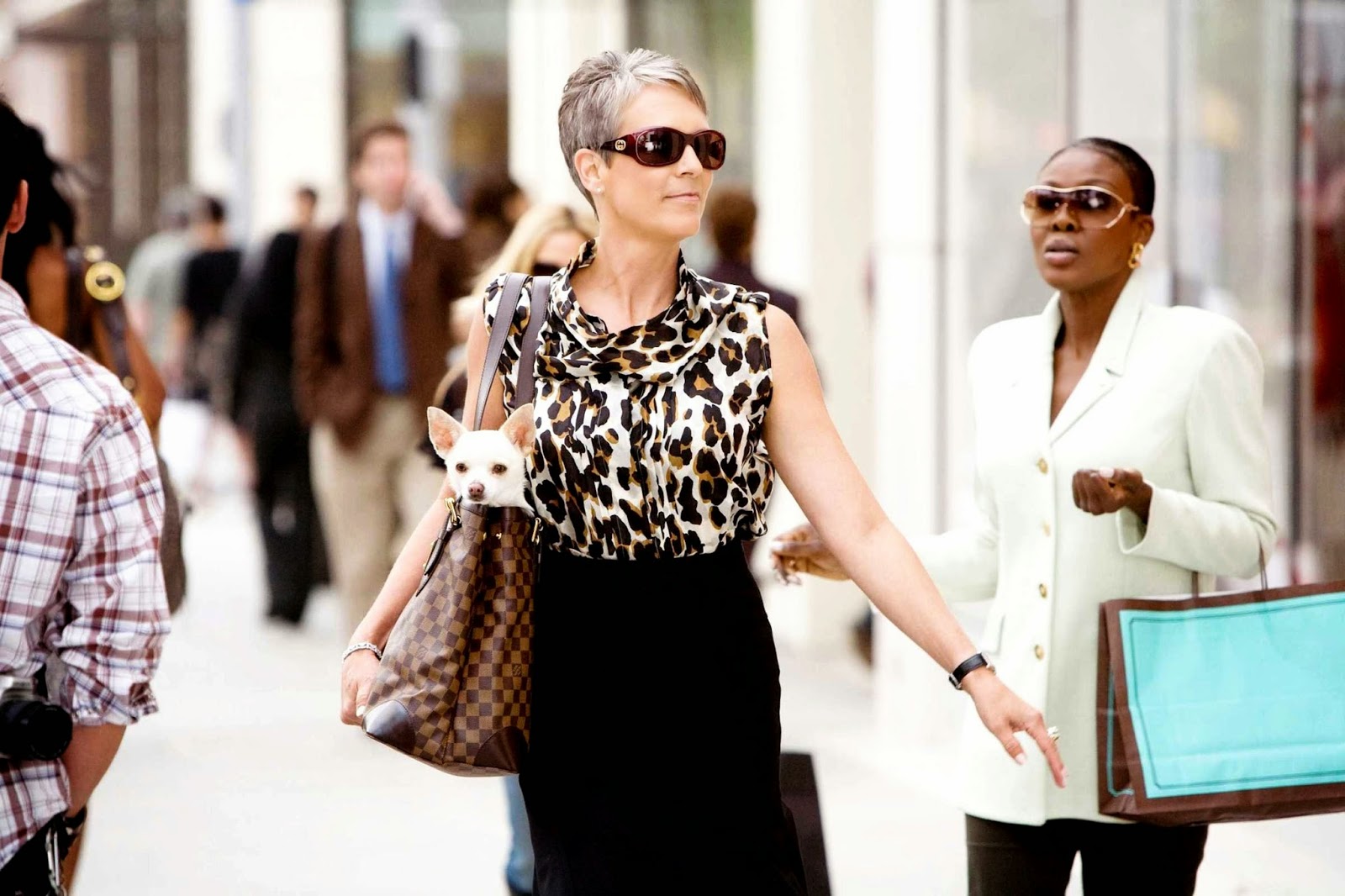 While "Beverly Hills Chihuahua" isn't a high-profile animated blockbuster, it was successful and is a good family comedy. The usual clichés are in full force, and we can run through them quickly: a rich (dog) is brought down a peg and made to face reality beyond her pampered lifestyle, the supreme value of "street smarts" is recognized, and people (and dogs) of different races find that they have lots in common and even love. An army of chihuahuas is shown, keen to prove that there is more to their breed than the traditional lapdog stereotype. Typical amusing sidekick characters (Manny and Chico) who have nothing to do with the plot are thrown in for good measure, and we get lots of scenic shots of exotic locations (seaside resorts, for instance). Thus, all of the usual Disney notes are hit. This is not ground-breaking, and there is absolutely no mystery about where the story is going after about the first five minutes. 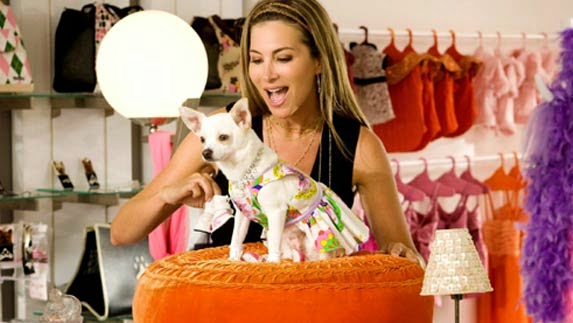 All that said, if you have a sweet spot in your soul for hounds, "Beverly Hills Chihuahua" should amuse your entire family. It is full of the usual preachy hidden lessons, for sure, but it is well-made and loaded with chuckles. After a while, you really begin to believe that these dogs are talking! So many people love this film that it has led to two sequels, "Beverly Hills Chihuahua 2" and "Beverly Hills Chihuahua 3: Viva la Fiesta!," which were both direct-to-video and do not feature the original cast. Who wouldn't find a prissy chihuahua thrown out on the streets to fend for herself full of potential comedy? Just be careful - if you show this to your four-year-old, she may start asking for a chihuahua for Christmas!

Recommended for everyone. Below is a trailer for "Beverly Hills Chihuahua":