Ben Ridgway produced this psychedelic extravaganza of color and light that is a lot of fun to watch.

He has a lot of similarly freaky stuff on Ridgway's site.

Back in the '60s, if you wanted something kaleidoscopic to trip to, you had to go see "2001: A Space Odyssey" or "Alice in Wonderland" in a movie theater and run the risk of getting run off to jail for being a nuisance. Now, all you have to do is click on someone's web site! 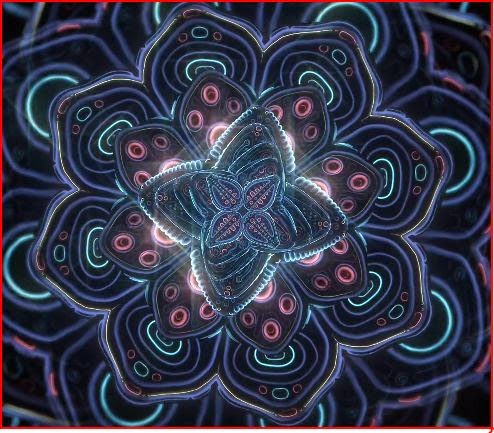 But you don't have to be doing anything illicit to enjoy the dazzling geometric patterns in "Cosmic Flower Unfolding." It may also serve as a kind of Rorschach test, wherein you see something that is there only because your mind interprets it that way. It may be a flower unfolding to you - or it may be something else completely.

Anyway, it is a fun little diversion that hopefully, you will enjoy.