This is an early animation created by Jim Henson of "The Muppets" fame.

I will tell you that this is not the most entertaining animation you are likely to see. However, it has some things going for it.

First, it undeniably is an early music video. In 1961. Before MTV, the Beatles, and all that. Not the earliest music video, since movies were doing this decade earlier and Walt Disney's 1941 "Fantasia" was a collection of music videos.

Second, it is kind of cool in its own right. Henson was doing something very original. This was sort of like a computer program that shows the tonal frequencies or whatnot - done by hand. Also, the drumming is great.

Third, it's interesting to see how he did it. It was just a blackboard, maybe velvet, with little pieces of paper that he cut out and arranged by hand. That's it! He was really thinking outside the box.

Fourth, and most interesting, there is some video at the end of Henson himself and his studio. He's just a guy, not the artistic giant of legend. Just a guy. 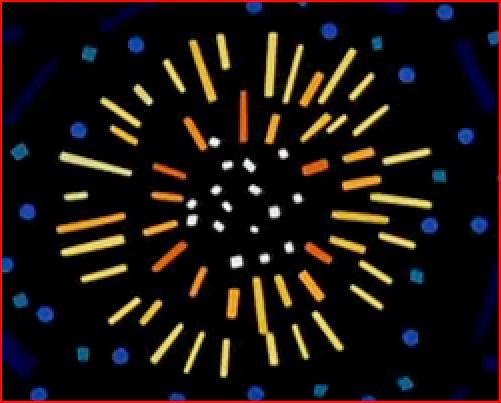 "Drums West" cut-paper animation from Jim Henson. This newly rediscovered short was created in Jim's home studio in Bethesda, MD around 1961. It is one of several experimental shorts inspired by the music of jazz great Chico Hamilton. In the end, in footage probably shot by Jerry Juhl, Jim demonstrates his working method.