This is a kind of neat display of real-life sketches that turned into a big-time anime.

Unless you speak or read Japanese, you probably wouldn't stumble across this - but that's why I'm here! I have my sources.

As background, Tetsuya Takeuchi is an animator who has been in the business since at least 1990. Of course, you've never heard of him unless you're really into anime. But he's really talented - there's a whole gaggle of guys in Japan who will just knock your socks off with how good their sketches are.

Anyway, "Sword Art Online II" is one of his recent projects for A-1 Pictures, one of the television anime houses in Japan. This video shows the drawings that went into a scene from that project, in fact, it is the opening sequence.

Just imagine how much work goes into first coming up with a story for an animation, then sketching it out like this frame by frame, then upgrading it laboriously until it is smooth and colorful and delightful enough to show on television so that some moron critic can say it's stupid because the characters don't look real enough and "why do their faces always look the same anyway."

Eh, we all take things for granted, and that's ok. But an occasional peek behind the scenes helps us to appreciate what is really going on.

These guys have to be good, and quick. It's only a week between shows. There are multiple layers of production, one animator does something like this, then passes it off to be upgraded.

The scene is run through at normal speed, then again in slow motion so you can see everything that is happening. Some of the sketches are just glorious in their vivid capture of motion.

"Sword Art Online II" features heroine Sinon and heavy Kirito. They are a series of novels by Reki Kawahara. 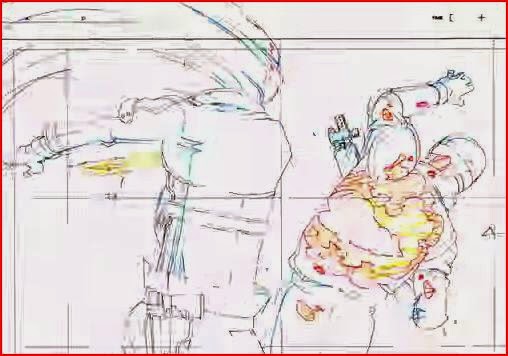 Crunchyroll and Daisuki stream the series as it airs in Japan.