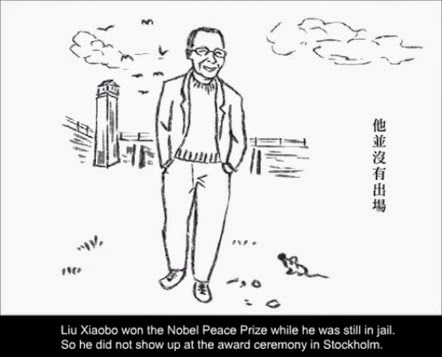 Chinese animation is still a fledgling industry, but it is on the rise. It also has something to say, which may surprise some folks.

This is an animation about a political event that you likely never heard about. Since it gives a glimpse into Chinese art, we present it here, with an explanation below. The animation is difficult to decipher unless you know the background or understand Chinese writing, but bear with me here, it will all make sense.

Liu Xiaobo is a Chinese human rights activist (and lots of other things such as a professor) who called for political reforms and the end of communist single-party rule. Fat chance! Xiaobo is currently incarcerated as a political prisoner in Jinzhou, Liaoning. His wife, who did nothing wrong that we know of, is under house arrest. The Chinese government does not play around with this sort of thing. 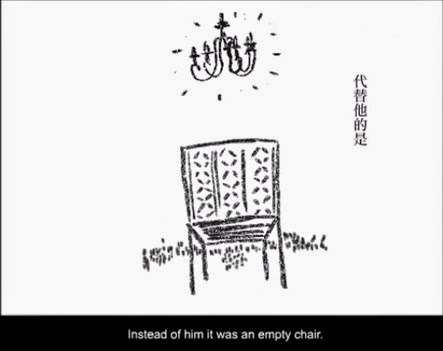 Xiaobo won a Nobel Peace Prize, but could not attend because he was in a jail cell. Liao and the others tried to place an empty chair at the Nobel Prize ceremonies in Stockholm in 2012 to protest Xiaobo's incarceration that had resulted in his inability to attend to accept his award. The dissidents also were upset that Mo Yan, a controversial Chinese writer, would participate in the ceremony and accept his own Nobel Prize for writing that year whilst Xiaobo remained locked up and could not accept his. The Chinese government likes Mo Yan and doesn't like Liu Xiaobo, while the dissidents now like Xiaobo and don't like Mo Yan. Thus, the empty chair in the animation served multiple purposes, much like Clint Eastwood talking to an empty chair also served multiple purposes.

Not getting any satisfaction after the 2012 stunt (and it was a stunt, but a stunt attempted in a good way for a noble cause), the dissidents decided to up the ante in 2013. They dispensed with the chair idea and instead came up with streaking in the snow right outside the Nobel Prize ceremonies. Now, obviously, this was all set up, because the Swedes probably would have let these guys run around in the snow and dark and ice naked all night if they wanted to and then collected the frozen corpses in the morning. Probably the happiest guy in the entire country that night was the naked guy, Liao Yiwu, whose main concern no doubt was that nobody might notice and he might freeze to death if not "subdued." The dissidents got what they wanted, publicity for their cause and a mercifully quick end to this cold adventure, and they now have this video as well, more publicity. And, might I add in a not immodest way, this post.

I say this in the kindest possible way: the Chinese are great at these kinds of stunts, such as the famous picture of the guy standing in front of the column of tanks. I especially like the subtle animation touch here of having the Chinese leader at the microphone standing on a stack of books to make himself look important. This actually is a sad video, because it's a completely lost cause in a totalitarian state, but these guys are trying to do something anyway.

Below a clip of the actual, obviously staged, event. Look at the snow! It was December in Sweden! After dark! He must have frozen like an icicle! And it takes courage to do something like this, regardless of whether it was staged or not or in a foreign land when you live under a repressive regime. It doesn't take long to get frostbite under those conditions, either.

Oh, and the animation is actually a combination with an earlier animation from 2012 that was just about the chair incident. The chair one wasn't as much fun as this one, though. I mean, noble as it was, it was just a chair. Maybe next year they'll have a new, expanded version, too, that will be even more interesting.


On December 10, 2012, artist Meng Huang streaked outside the Nobel Prize banquet in Stockholm, Sweden, to protest Mo Yan winning this year's Nobel in literature. He was accompanied by German Peace Prize recipient Liao Yiwu, who is currently living in exile in Berlin. The two were upset that Mo Yan did not present an empty chair in honor of Nobel Peace Prize winner Liu Xiaobo, currently serving an 11-year sentence in China for state subversion.