Spider-Man in All His Webbed Glory!

If you are looking to pick up a Spider-Man series as a gift, or are just curious about how many series' there have been starring Spidey, this list may come in handy. These are our recommendations for which series to consider spending time on and which to pass by.

Let's get the ball rolling with number 8 on our list, then proceed down to our choice of the absolute best "Spider-Man" tv show to date.

Fox ordered 13 episodes of "Spider-Man Unlimited" in the late '90s, trying to hop on both the tv animation craze flowing from shows like "Animaniacs" and "The Simpsons." There clearly were plans to make the series last, as the series ends with an unresolved cliffhanger, but it wasn't meant to be. The show was hamstrung from the start because Fox never got full rights to all the Spider-Man characters. The animation is sub-part, the voice actors unrecognizable, and probably the worst sin is that the series is told in sequential order. Thus, if you randomly watch an episode and haven't seen the entire series, you are left wondering what is going on. The only thing going for "Spider-Man Unlimited" is that, if you are a fan of the 1994 series (see below), "Unlimited" serves as a kind of sequel of follow-on to it.

This version of Spider-Man is very traditional. We don't get "amazing friends" and there aren't any interdimensional portals or anything like that. There also are some story arcs in the series long before those became common on episodic tv, with relationships between Spider-Man and his adversaries like Dr. Doom playing out over episodes.

The animation is nothing special, and this "Spider-Man" is not remembered by many fans. However, it is bread-and-butter Spidey, focusing on Peter Parker and his life rather than the glitz of interdimensional warps and all that, so worth a look.

"Ultimate" is aimed at younger viewers, much as the classic 1967-70 series was. Spidey talks to the audience and goofs around and generally does not take the proceedings all too seriously. It is slapstick at times and always aims for humor, which unfortunately does not jibe well with the somewhat sad Peter Parker tale.

Marvel really got behind this version - it came along during an era when there seemed to be another Spider-Man movie coming out every year - assigning writers from "Batman: The Animated Series" and other highly regarded projects.

This is another "Spidey and his amazing friends" version, and they tend to be the least Spider-like of them all. This time around, his colleagues are Nova, White Tiger, Iron Fist and Power Man, all, of course, under the aegis of S.H.I.E.L.D. Agent Coulson is around in disguise as the Principal of Peter Parker's high school.

"Ultimate Spider-Man" isn't bad, it just isn't classic. There are better versions out there.

This series aired on MTV of all places, and is not very well known. The 2002 Spider-Man film had done well, and some smart exec figured that the public hungered for a continuation of that tale. So, we get Peter, Mary Jane Watson and Harry Osborne moving on from high school to college, Empire State University. There even was a new love interest for Spidey, Indira Daimonji. 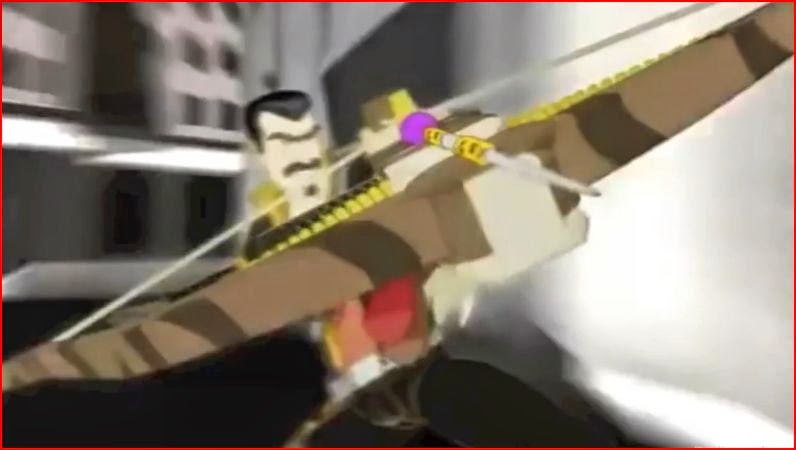 The focus remained on Peter Parker and his trials and tribulations, just as did the film. There aren't a lot of villains, as Peter has his hands full playing with Mary Jane and Indira. The real highlight of the series was the voice talent, which included Neil Patrick Harris and Lisa Loeb. The animation also was very good for the time, though some will carp that its quality isn't up to more recent fare. However, in a good dvd set it looks outstanding to this viewer.

"Spider-Man: The New Animated Series" is a fun watch and well worth your time.

The 1994 "Spider-Man" lasted a long time and led to the sort-of sequel mentioned above in 1999-2000. The animation was good, though not spectacular, and Mary Jane served as Peter's unswerving love interest. There were long story arcs that played out over multiple episodes, and other huge characters from the Marvel universe wandered in from time to time. This series was so good that it could have lasted longer, but there were rights issues behind the scenes that led to its untimely passing. This is the "Spider-Man" that best resembles the comics, so if you are a fan of Marvel comics books, this is a series to consider watching. There's so much of it that it will entertain you for a long time, and you can continue the fun for another season with "Spider-Man Unlimited" if that grabs you.

Big fans are going to question how I can recommend this series at all. This does take a little explaining, but bear with me. This ABC series is worth getting if you can find it.

This "Spider-Man" gets a bad rap these days for a number of reasons. First, the animation is prehistoric and barely a step up from "The Flintstones." Not that there's anything particularly wrong with that, but modern eyes expect more these days than endlessly scrolling backgrounds and stark drawings surrounded by black lines. The villains are corny, and the plots trite.

However, I defy any true Spider-Man fanatic to claim that this version does not have a special place in his or her heart. The series is absolutely a riot if seen in the right spirit, and in a good way. The intro alone is worth having, it is a stunning tour de force of telling the Spider-Man experience and pointedly showing that, hey, this is a good character, not a bad guy. So, they have Spider-Man waving at the camera as he swings along and then taking a picture with a lens that for some reason says "Your Friendly Neighborhood Spiderman." This was a show for kids, as was all such animation at the time, and they had to make a special effort to show that "Spider-Man" wasn't evil, but was our hero, because Spider-Man simply wasn't very well known yet (unlike now).

The best part, though, is the eternal theme song. There isn't a Spider-Man fan out there who doesn't subconsciously accept the theme to this "Spider-Man" as the true Spider-Man theme, just as, say, true Star-Trek lovers will never accept any theme that doesn't have references to the original "Star Trek" theme. It just is what it is, and the film creators later acknowledged that immutable fact by incorporating this original theme into the film series. If you don't recognize that when it happens, and why it is so special when it does happen, you are sorely, sorely deprived as a Spider-Man fan. Trust me, the powers-that-be behind the Spider-Man films know all about this original series, and guys like that don't go out of their way to pay direct homage to no purpose.


♪♫  "Spiderman, Spiderman, does whatever a spider can, spins a web, any size, catches thieves, just like flies, look out! Here comes the Spiderman!" ♫♪

There were all sorts of problems with this series that are well-known now and were at the time. The original animators, Grantray-Lawrence, went bankrupt after the first season and the show was passed off to Krantz Films, a second-tier outfield led by Ralph Bakshi. Bakshi is legendary for many reasons, but not for his work on this "Spider-Man." Thus, if you can only get one season of this original classic for that special Spider-Man lover in your life, the first season is an absolute must for any true follower of Spider-Man.

The studio was run by Grant Simmons, Ray Patterson and Bob Lawrence.

Ray Patterson remembered, “Spider-Man was different. It was completely drawn from the beginning, just like a regular show. We had around eighty people working on the show so it was a pretty big deal. Thirteen half hours for ABC. We took over that old hotel across from the Universal Studios entrance (in California) and remodeled the whole thing, made it look all cartoony with different colored doors and everything. As a matter of fact, we had a booth all set up on the Universal tour that would have animators in there and girls painting cels. We were all set up to do it, but then we closed the studio in 1968, after the first season of Spider-Man was finished, and that was the end of that. We trusted the wrong people.”

So, the first season was quality. After that, not so much.


Spider-Man and His Amazing Friends

This version of "Spider-Man" involved Spidey and the usual array of super-hero friends. Personally, that kind of detracts from the series - we big Spider-Man fans want out tale told unfiltered! - but this was a good, solid version anyway.

"Spider-Man and His Amazing Friends" introduces us to Iceman and Firestar. Apparently, they couldn't get Human Torch for this series due to a rights issue, so they came up with Firestar, who is a bit of a babe. The trio (Parker, Bobby Drake, and Anjelica Jones) were college students and roommates (things must have been pretty liberal at that school!), and they frequently went on trips with other Marvel superheroes. This was a breakthrough series in that respect, and opened the door for later iterations with various combinations of the Marvel superhero pantheon.


Dan Gilvezan and Frank Welker of "Transformers" provide the main voices, and there was narration by Stan Lee himself (though that has been cut from most modern versions, if you can find any that has it, get it). This is a fun series, and Firestar is fun to look at, so this is a worthy entry for anyone looking to get a fun Spider-Man experience.

The classic Batman animated television series by just about everyone's reckoning was "Batman: the Animated Series" in the 1990s, and "The Spectacular Spider-Man" follows nicely in those footsteps. This series is kind of a fan's version, with elements drawn from the films and comics. The producers were Greg Weisman and Victor Cook, and they did a great job telling stories and not playing up Spidey's freakish abilities. Josh Keaton became "the voice of Spider-Man" in this series and did a great job. The animation is somewhat simple, which actually works well and let's the series tell a story rather than trying to overwhelm the viewer with glitz. 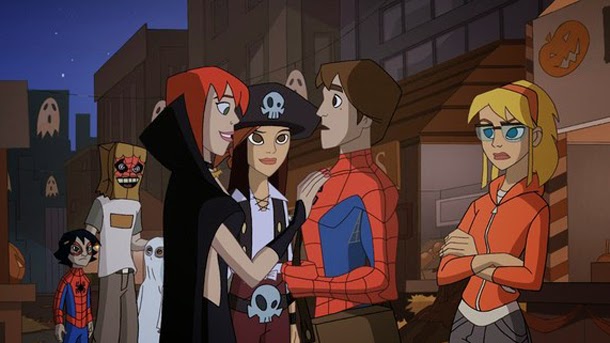 "The Spectacular Spider-Man," like so many Spider-Man series before it, fell victim to behind the scenes rights issues (Disney bought the rights, so Sony could no longer use the characters). If you are looking for a garden-variety Spider-Man series that is artfully done and just tells the story of Spider-Man, this is the one to get.