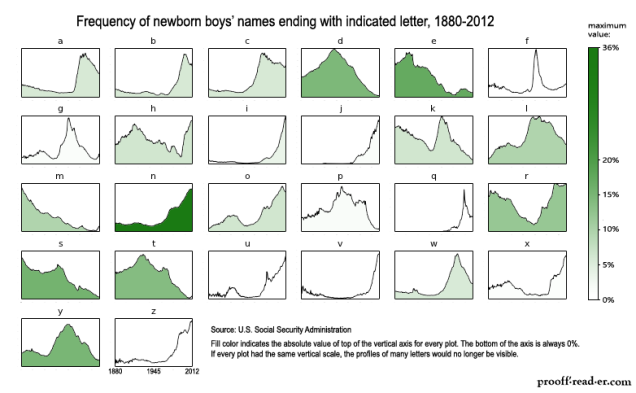 Animations are useful for presenting extensive data in an easily understood form. Data scientist David Taylor has prepared some interesting graphs that have practical applications that we present below.

One of the best illustrations of this use of animation in presenting statistics is these animations of baby boy names through the years. The government collects statistics on this topic and has since the 1800s. That amounts to a lot of data. Piles of data. Rooms-full of dusty sheets.

It is possible to do weird things with the data. Besides the obvious annual rankings of most popular names that we sometimes see, scientists also note trends in naming that may not be so obvious.

It can be difficult to work with names because often baby names are slightly different variants of each other, though essentially the same. For example, while "Ashley" and "Ashleigh" look different, for all intents and purposes they sound the same, abbreviate the same, have the same nicknames and the difference in spelling will only matter when people are put in alphabetical order for gym class or something.

Getting deeper into the data, though, presents some interesting trends that leap out at you and that you would not expect. One of these is the growth in the letter "n" as the last letter in a boy's first name.

By itself, this means nothing. Who cares how many baby names end in any particular letter? It's a statistical fluke - right?

Well, maybe not. It opens the door to something that is going on that you would have no other way of noticing.

Now, traditional boys' names sometimes ended in "n," such as John. As the graph below shows, though, back in the early part of the last century when traditional boys' names were in fashion, "n" was an also-ran. Something changes about three-quarters of the way through, though. The letter "n" as the last letter in boys' names has skyrocketed in the last fifty years. Now, this is something that isn't going to change the world, but finding this out leads to more questions, some of which have surprising answers.

A theory on why "n" suddenly acts like a period at the end of a sentence for boys' names suggests that herd behavior is alive and well. Sure, you won't name your boy "John," that's, like, so 20th Century. Instead, why not name him "Jayden" or even (if you're wild and crazy) "Jayd8n"? That's original and it just flows off the tongue, right?

Well, it does. As an example, one of the most popular names for boys right now is "Jayden" - it was the most popular choice in New York City in 2008, for instance. However, one name isn't going to alter the scales all by itself, any more than the enduring popularity of "John" did in 1900 or 1930 or 1960.

However, to make names "distinctive," more and more parents are coming up with slight variations on the same-sounding names - the "Ashley/Ashleigh" phenomenon. They're different - but they're really not.

Jayden is insanely popular now, but it is simply leading the pack. So, along with Jayden, there are uncounted variations that sound exactly the same: Jaiden, Jadon, and so on.

Which is not to even mention names that rhyme with the omnipresent "Jayden," such as "Aiden" (No. 10 on the list, wow, what a coincidence), "Hayden" and "Kayden" and so on. The common factor is that they all end in 'n.'

Now, we're not picking on boys or the parents of boys or anything like that. Girls' names go in similar cycles - at one point in the '70s, "Jennifer" was the name of every other girl, and further back "Mary" was at some points practically a synonym for "girl" (though parents would exert their creativity via the middle names of "Mary" girls, for instance, Mary Faith, Mary Jane, Mary Grace, Mary Hope, etc.).

But this particular data is about boys, we take a different look at baby girl names here. Put this all together, and what does it mean? That despite all the weird spellings you see these days, parents are actually naming their kids practically the same things when you sound out the name rather than spell it. It is almost as if society still focuses down on a very small slate of names as it always did, but now only distinguishes them with slightly different spellings, as if giving the kid an identifying number to go through life with to separate him from all the other kids whose names also sound like "Jayden" out there. The identifier or "number" is the actual spelling of his "Jayden" variant.

Of course, you can manipulate data for girls' names as well. However, the point is that this should start you thinking when you name your own child. Are you really being original? Or are you simply joining the herd while fooling yourself into thinking you are going your own way? There are no right or wrong answers to this, but it can be useful to at least know what you subconsciously are doing.

The SSA's top names for boys are:

The top names for girls are:

Perhaps something to think about when you decide that you have come up with that special name for your child. It may not be so unique after all. It's scary to think that we operate by herd instinct with such an important decision - but that's probably the very reason why we do.

This continues our effort to show the wide variety of applications of animation these days.