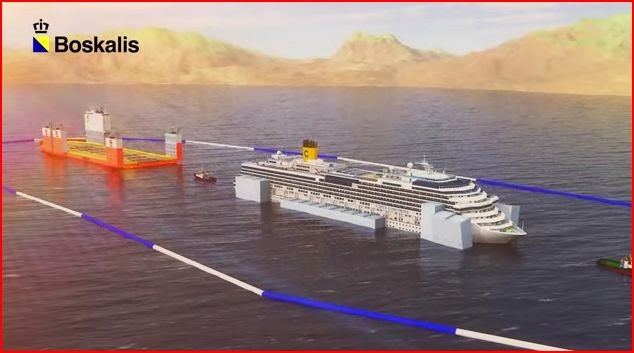 There's still a lot of interest in the Costa Concordia salvage operation, which is the biggest of its kind. The most fascinating aspect is how much time and effort -and pollution - they avoided by retrieving the ship in one piece.

There is another animation of the Costa Concordia wreck here.

Ship retrieval is an advanced science, with its practitioners going back hundreds of years. It was much more common a hundred years ago for ships to wind up on rocks, destroyed and unseaworthy, and then the insurers who were on the hook had to figure out what to do.

For instance, on August 5, 1910, the Princess May went aground at high tide on Sentinel Island, Alaska (between the main area of Alaska and Vancouver). It was a regular cock-up: even with the heavy fog there was a lighthouse on the island and the ship slammed straight into the small rocky outcrop as if aiming for it.

After the tide went out, well, it didn't look so good for retrieval efforts of the Princess May (above picture). The ship's owners, having saved the passengers and the cargo of gold, got down to business. They had to act fast because winter wasn't far away and the longer the ship sat on the rocks and got pounded by the tide, the worse the prospects were. That's how it is in ship retrieval, same then as now, time is money.

The owners hired the world's expert on ship retrieval. After a lot of rock-blasting and other preparation, the expert managed to refloat the ship and get her in for repairs - not salvage. The ship sailed again, for twenty more years - now, they'd probably just scrap it automatically for liability reasons. Now that's a successful retrieval operation.

The Costa Concordia effort follows in those footsteps. While they had to break her up, the operation would have been infinitely worse if they hadn't had the massive equipment to tow her to the scrapyard. Any job is easy if you have the right tools, they say, and fortunately, they had the tools because of centuries of ship retrieval.