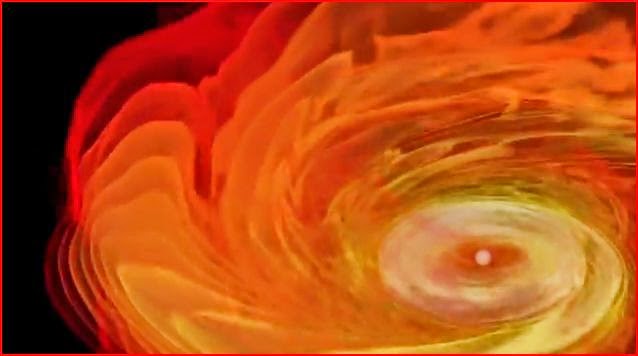 
Neutron Stars Attack! From NASA. NASA is doing its best to make their research accessible to the public. The Nasa Goddard Space Space Flight Center released this animation to show folks their best guess as to what neutron stars look like when they get together.

This animation is not from a science fiction film, this is what the top minds in space science think goes on out there, somewhere, pretty much all the time. It is a very process that we are viewing.

This is a two-minute, close-up look at a black hole arising from the meeting of two neutron stars that, in the animation, begin at a distance of 11 miles. Though tiny, their gravitational forces are colossal and rip them apart and form something new. The forces are so titanic that the actual collision would resolve itself, from start to finish, in milliseconds.

When all is said and done, after this destruction, all that will be left is a black hole. You wouldn't be able to see anything, because the gravitational forces are so intense that not even light could escape. 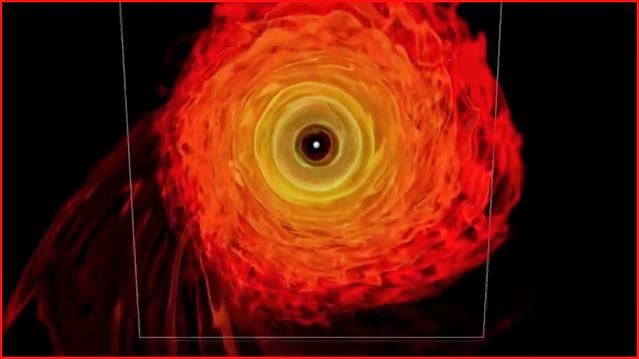 
This supercomputer simulation shows one of the most violent events in the universe: a pair of neutron stars colliding, merging and forming a black hole. A neutron star is the compressed core left behind when a star born with between eight and 30 times the sun's mass explodes as a supernova. Neutron stars pack about 1.5 times the mass of the sun — equivalent to about half a million Earths — into a ball just 12 miles (20 km) across.

As the simulation begins, we view an unequally matched pair of neutron stars weighing 1.4 and 1.7 solar masses. They are separated by only about 11 miles, slightly less distance than their own diameters. Redder colors show regions of progressively lower density.

As the stars spiral toward each other, intense tides begin to deform them, possibly cracking their crusts. Neutron stars possess incredible density, but their surfaces are comparatively thin, with densities about a million times greater than gold. Their interiors crush matter to a much greater degree densities rise by 100 million times in their centers. To begin to imagine such mind-boggling densities, consider that a cubic centimeter of neutron star matter outweighs Mount Everest.

By 7 milliseconds, tidal forces overwhelm and shatter the lesser star. Its superdense contents erupt into the system and curl a spiral arm of incredibly hot material. At 13 milliseconds, the more massive star has accumulated too much mass to support it against gravity and collapses, and a new black hole is born. The black hole's event horizon — its point of no return — is shown by the gray sphere. While most of the matter from both neutron stars will fall into the black hole, some of the less dense, faster moving matter manages to orbit around it, quickly forming a large and rapidly rotating torus. This torus extends for about 124 miles (200 km) and contains the equivalent of 1/5th the mass of our sun.

Scientists think neutron star mergers like this produce short gamma-ray bursts (GRBs). Short GRBs last less than two seconds yet unleash as much energy as all the stars in our galaxy produce over one year.

The rapidly fading afterglow of these explosions presents a challenge to astronomers. A key element in understanding GRBs is getting instruments on large ground-based telescopes to capture afterglows as soon as possible after the burst. The rapid notification and accurate positions provided by NASA's Swift mission creates a vibrant synergy with ground-based observatories that has led to dramatically improved understanding of GRBs, especially for short bursts.