All This and World War II 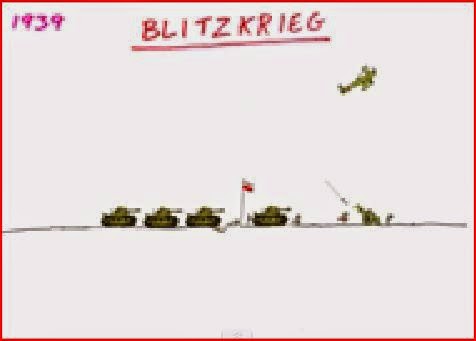 World War II in Animation in Seven Minutes. This is a brisk summary of the major causes and events of World War II. If you can memorize this, you can pretty much pass any high school test on the period.

It's easy to point out things that are omitted, but as a breezy summary, it hits the key buzz words. Of course, they write volumes on single battles of World War II, with no detail too small to include. For instance, did you know that the streetcars in supposedly devastated Berlin were still running right up until the incoming Soviets blew them up? Or that Ninth Army on the Oder fought like maniacs to hold their position, then, after being bypassed, pivoted and almost made clean its escape to the West? That Japan suffered two atomic bombs that blew two major industrial cities to pieces but amazingly still didn't surrender until the Soviets finally invaded? That Hitler personally designed the Swastika flag based on symbols he had seen on some soldiers' helmets during a visit to Berlin?

So, anyone who wants to quibble about detail, well, be my guest. You could get your doctorate in this and still know only a fraction of what has been written about it. Unless you know the order of battle of the opposing forces on Crete in the last week of May 1941, the number of U-Boats off the US coast in August 1942, and the location of the only mainland US area shelled by Japanese guns, you and I are just like everyone else with something to learn if we care to.

But this is a fun way - well, more fun than some grim 500-page textbook - to learn the basics about Hitler and Stalin and the Holocaust and all that stuff that went on. And there's so much misinformation about those events now that any educational tool is worthwhile.

Manny Man Does the history of World War 2 in seven minutes. It's a quick and easy way to get up to speed on what the Second World War was about! Of course, it's seven minutes so not every single detail is in there but you get the general gist of what happened! Enjoy! Please share!