DreamWorks is in trouble. There's no question that DreamWorks Animation is going through a difficult period. It has had three out of four flops recently - "Rise of the Guardians" at the end of 2012, "Turbo" in 2013, and "Mr. Peabody and Sherman" this year. "The Croods" did well last year, so expect a sequel from that as soon as they can crank one out. But a 25% success rate is not good, and those flop films collectively lost a lot of money. Many think that DreamWorks spent too much  ($180 million) on "Mr. Peabody," a sign of over-confidence. With Hollywood accounting, you can never be sure exactly what is going on, but DreamWorks had to take huge charges for its film failures that really hurt its stock price, so that money that it isn't seeing is important.

The common denominator of those three under-performing films, aside from the fact that they were all from DreamWorks and greenlighted by legendary studio head Jeffrey Katzenberg, is that they were not sequels. Now, that might not seem like something out of the ordinary or even something to mention - for instance, Disney almost never does theatrical sequels to its major hits, though that may be changing - these days the most popular word in Hollywood is, you got it, "sequel."

To a large extent, DreamWorks has built its empire on sequels. "Shrek" begat "Shrek 2" and "Puss in Boots" and, well, all sorts of little Shreks. DreamWorks also has several other highly successful franchises such as the "Madagascar" films. So, DreamWorks is far from being a one-trick pony.

It's an axiom of the business that movie stars are allowed three box office duds in a row before they start losing roles. While studios are a bit more resilient than that, they aren't immune to costly film failures. Disney has gone through several periods in its history when the very survival of the studio hung by a thread, and nobody in the business compares to Disney in terms of success and prestige. DreamWorks has nowhere near the deep catalog of Disney, and it does not have the tv networks and tv series and the theme parks (though DreamWorks is building several major parks in China and Europe) and what-not that Disney can always fall back on (not that Disney has to with the end-times success of "Frozen").

So, with DreamWorks struggling, what is its prognosis?

Katzenberg hears the cries of the shareholders who have been losing money recently. Accordingly, here is what the studio is going to do, some of these things obvious, some just recently announced:
What does all this tell us? Well, it confirms the power of sequels. It also shows that DreamWorks has a whole deck of aces up its sleeves.

Sequels in Hollywood are virtually guaranteed money-makers. All you have to do is re-tell the same story with different bits and maybe a couple of new actors thrown into the mix as new villains or new buddies to the main character and... guaranteed hit.

That is life in Hollywood these days. Anyone who tells you differently is kidding you. 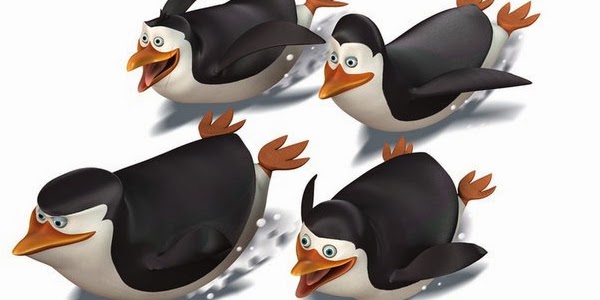 "Home" has a brilliant pedigree. It stars proven headliner Steve Martin and also features Jim Parsons and Rihanna. However, while Martin is proven, the story is not. "Guardians," for goodness sake, had Hugh Jackman in it, and there's no more bankable star today than Jackman. So a big name can't save a turkey all by himself (and nobody is saying that "Home" is ready for the bake oven), certainly not Steve Martin, who hasn't been in much lately.

Accordingly, "Home," which was originally supposed to be released on November 26th, 2014; has been moved back to March 27th, 2015. "Penguins of Madagascar," another sequel to "Madagascar" that has the added bonus of featuring popular stars John Malkovich and Benedict Cumberbatch, has been moved forward to a November 26, 2014 release date after previously slotted for mid-2015. It's not really a sign of desperation - but a sign that DreamWorks is feeling the heat and wants to bank some coin before putting out any more new (non-sequel) material. Three out of four failures is bad enough, but four out of five would not be good at all and might cause all sorts of problems with financiers.

When you think about it, this latest move makes sense anyway. Penguins in wintertime - when else would you want to release a movie about penguins? The Steve Martin film has had a rocky marketing campaign, being tied so far to the sluggish "Mr. Peabody," so it could use more time to get the word out to people that it is worth watching.


Now, here's the true bottom line: DreamWorks has nothing whatsoever to fear right now. Nothing, that is, if everything proceeds as it always has in Hollywood, with sequels to successful films also being huge successes.

If "How to Train Your Dragon 2" and "The Penguins of Madagascar" have unexpected problems, though, then DreamWorks will be in trouble. But that's highly unlikely.

Email ThisBlogThis!Share to TwitterShare to FacebookShare to Pinterest
Labels: Dreamworks Animation, Home, How to Train Your Dragon 2, Jeffrey Katzenberg, Mr. Peabody & Sherman, Rise of the Guardians, Steve Martin, The Penguins of Madagascar, Turbo